On Wednesday 18 June 2014, a special painting has been officially presented in the Tax & Customs Museum in Rotterdam. The work is The Governors of the Amsterdam Gold- and Silversmiths’ Guild, painted in 1701 by Juriaen Pool.

It was in the possession of the German-Jewish art dealer and collector Max Stern when World War II broke out. In the 1930s, he was forced by the Nazis to relinquish his collection including this group portrait. Some seventy years later, thanks to the efforts of Concordia University in Montreal, which administers The Max Stern Art Restitution Project, it was discovered to be in the hands of a German casino. In 2011 it was returned. Under a privileged agreement with Stern’s heirs, the painting was purchased by the Tax & Customs Museum which then undertook considerable efforts to have the work restored. The public will be able to view the painting as of June 19.

The museum is delighted with this acquisition and restoration that has been realised with the financial support of the Friends of the Museum. The group portrait of the governors of the Guild will be a major work in the Surety Collection, the part of the collection on the theme of assaying gold and silver.

“In addition we are honoured to be able to show this painting in its beautifully restored state. In the resident exhibition ‘Justice and Confidence’, its history in the war will give it a symbolic value, because it illustrates a different side to the relationship between the government and its subjects, as Max Stern learned to his cost. We can’t change history, or make things right, but we can ensure that this remarkable story gets told,” according to museum director Frans Fox.

“Considering how so many works missing from Stern’s collection are by the Dutch Old Masters, we have benefitted from crucial collaboration with this country’s government officials, art specialists, archives and museums”, noted Dr. Clarence Epstein, Director of the Max Stern Art Restitution Project at Concordia University. “It is so meaningful to see this monumental piece that has journeyed so far for so long, return to the Netherlands from where it originated more than three hundred years ago.” 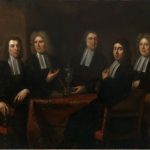