From the Ministry of Education, Culture and Science,
1 February 2016

The Netherlands and France have signed a treaty over Rembrandt’s twin portraits of Maerten Soolmans and Oopjen Coppit. The pact between Dutch Minister for Education, Culture and Science Jet Bussemaker and her French counterpart, Fleur Pellerin, includes arrangements for the works to be restored in the Netherlands and then exhibited here in their full glory for the first time.

Because French law prohibits joint ownership, each nation has bought one of the paintings. The Netherlands has acquired Maerten, France Oopjen. To ensure that they stay together, the new accord contains firm formal agreements between the two countries. The works will always be exhibited side by side, alternately at the Rijksmuseum in Amsterdam and the Louvre in Paris.

The two museums have been accorded joint management responsibility for the portraits, with their interests as works of art always coming first. Packing and shipping make huge demands of 400-year-old paintings, so it has been agreed that, in principle, they will not be loaned to other institutions.

The works will first undergo minor cleaning at the Louvre, before being exhibited there for three months and then in Amsterdam for three months. After that they are to be fully restored in the Rijksmuseum’s specialist studio before returning to its galleries in pristine condition for the first time since they were painted. 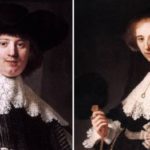