Catrina Hooghsaet was a member of the Waterland congregation of the Mennonite community in Amsterdam and favoured the restrained style of this radical Protestant group. She was, however, a wealthy woman and wears a rich silk dress with a lace collar and holds a tasselled lace handkerchief. Her hair is concealed by an elaborate head-dress held tightly in position by hooftijsertgen (literally, “head-irons”). Her pose suggests that there was a paired portrait of her husband but the couple had separated many years earlier and it may be that there was a portrait of her brother, as in her will she left this portrait and one of her brother to her nephew.

Rembrandt did not consider himself in the first place as a portrait painter: he was a history painter who depicted scenes from the Bible and ancient history, the highest calling for a 17th-century artist. However, he painted portraits at certain moments in his career, particularly in the years following his arrival in Amsterdam in 1632. Subsequently, he painted relatively few, often of friends. In this masterpiece of portraiture he conveys the strength of will and highly independent character of this remarkable woman.

The portrait has been on long-term loan to Penrhyn Castle near Bangor, Wales; and was shown at the National Museum Wales, Cardiff, from 2009–10.

Professor Christopher Brown CBE, Director of the Ashmolean, says: “Portrait of Catrina Hooghsaet is one of the greatest Old Master paintings in the country and one of the finest portraits ever made by Rembrandt. It is an enormous privilege to be able to show this important picture at the Ashmolean where it can be seen by millions of visitors over the next three years. We are extremely grateful to the painting’s owners for making this possible.” 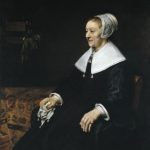