The Rembrandthuis (Rembrandt House Museum) features one of the most important collections of etchings by Rembrandt. The paintings on show in his former home and workshop are all from his predecessors and pupils. Now and then the Rembrandthuis would feature paintings by the master himself, on short term loans and in temporary exhibitions. Now, thanks to a loan from the George en Ilone Kremer collection, for the next two years the Rembrandthuis will show the Old man wearing a turban from 1627/28

Information from the Parool newspaper, 21 January 2010

Director Jan Rense Boonstra is content with the ability to show this "beautiful early work". He hopes that the generous loan from the Kremer couple will inspire other private collectors to do the same. He also hopes museums that are closed for renovation would consider the Rembrandthuis as a temporary home for their paintings. Boonstra expresses the ambition to always show at least one painting by Rembrandt in the future.

Apart from the "tronie" by Rembrandt, the museum also received work by important pupils on loan from the Kremer collection: a Self portrait by Gerard Dou, a Portrait of a 19-year old woman by Gerbrand van den Eeckhout and a Maria with child by Ferdinand Bol. 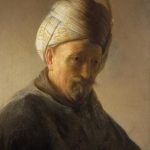 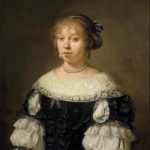