The Rijksmuseum Amsterdam has acquired a unique portrait of an African man. The panel Portrait of an African man, painted by Jan Mostaert and dating approximately from the period 1520-30, is the only independent painted portrait of a black man in the Renaissance. The BankGiro Loterij, the Mondriaan Stichting, Vereniging Rembrandt co-facilitated by Prins Bernhard Cultuurfonds, the VSBfonds and the Rijksmuseum Fonds contributed towards the acquisition of the panel, purchased for € 600,000. 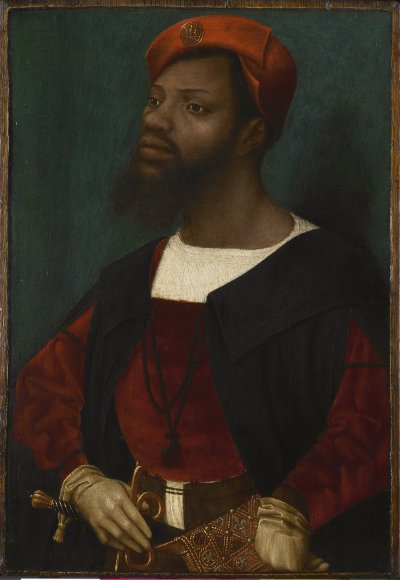 An independent portrait of a black African, appearing so early in the 16th century, is absolutely unique. Black kings were regularly depicted in the 15th and 16th centuries in representations of The adoration of the Magi, but portrayals of Moorish kings in such paintings were generally very stereotypical. It is not known who is represented on the panel just acquired. There are indications that he was associated with the court of Margaret of Austria in Mechelen or was an attendant of Charles V. His pose, his rich clothing and other details are evidence of a successful assimilation within the cultural standards of the European Renaissance.

The rich clothing worn by the subject of the portrait, the gloves, the sword and the embroidered bag point to Spanish-Portuguese origins and are evidence of the considerable status he must have had. The pilgrim’s insignia on his hat, of Our Lady of Halle (south of Brussels, where Burgundy and Hapsburg pilgrims journeyed), the sword and the fleur-de-lis on the embroidered bag are clues that, in time, may possibly provide more information about the man’s identity.

The painting will be given a prominent place in the ensemble devoted to Mechelen and Brussels– seats of centralised power in the Netherlands in the 16th century – in the exhibition Renaissance and reformation in The New Rijksmuseum (from 2008).

The panel can be viewed from 8 July to the end of August in the Philips Wing. After that, the portrait will become part of the collection of Early Dutch Paintings on loan to the Boijmans-Van Beuningen Museum in Rotterdam. The painting will also be on show as part of the exhibition Black representation: Africans and Creoles in Dutch fine art (Zwart verbeeld: Afrikanen en Creolen in de Nederlandse beeldende kunst) (working title) planned for 2008 in De Nieuwe Kerk.