The Rijksmuseum Amsterdam has acquired an important addition to its rich collection of Dutch art.

This morning a special website was launched introducing the painting to the public: http://www.rijksmuseum.nl/steen/ 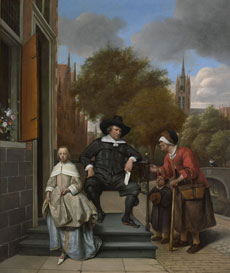 The renowned painting the Burgomaster of Delft and his daughter (1655) of Jan Steen is considered to be a key work in 17th-century Dutch painting and a characteristic depiction of the mentality of the Dutch burgher in the Golden Age. It has been bought from the heirs of Lady Janet Douglas Pennant. At 11.9 million euros, this is the most expensive painting in the history of the Rijksmuseum. This acquisition has been made possible in part by the Ministry of Education, Culture Affairs and Science, the BankGiro Loterij, the Sponsor Loterij, the National Art Fund, the Mondrian Foundation, the VSBfund, The Rembrandt Society and the Rijksmuseum Fund. The Museum will exhibit the painting in the presentation Rijksmuseum, The Masterpieces in the Philips Wing from 19 August 2004.

A burgher in black with his richly dressed daughter has had himself portrayed as a benefactor on the steps of his house on the Oude Delft canal. He seems to be considering his charitable deeds in front of the poor old woman and the orphan at her side who are appealing to him. The identity of the man is not yet known, but Jan Steen probably knew him well, given that he himself had a brewery on the other side of the canal. He meticulously depicted this summer view of the city with the tower of the Old Church in Delft in the distance.

The painting is one of the few portraits done by Jan Steen and is characterised by a sparkling palette and lucid composition that bring to mind the works of later Delft artists of the 17th century such as Johannes Vermeer and Pieter de Hooch. An innovative feature is the combination of portrait and cityscape, a genre that was just beginning to develop as a separate subject in Delft. There is an obvious comparison with Vermeer’s famous The Little Street also in the Rijksmuseum.

The painting was bought in the mid-19th century by Colonel Edward Douglas Pennant, first Baron of Penrhyn of Llandegai, and has remained in the family at Penrhyn Castle, Bangor (North Wales) for the last 150 years. Although the work is well known it rarely travelled. One of the few occasions was at the highly successful Jan Steen exhibition held at the Rijksmuseum Amsterdam in 1996-97.

Apart from the pictorial quality of the painting, it gives the viewer insight into mentality of the Dutch burgher in the Golden Age. Thus it is not surprising that Simon Schama (Columbia University, New York) chose it for the cover of his standard work on 17th-century Dutch culture, The Embarrassment of Riches. Because of its subject, the painting is a valuable addition to the future New Rijksmuseum. From 2008 the Rijksmuseum will emphasise its position as a national museum of art and history.

With 22 paintings, the Rijksmuseum had the richest and most extensive collection of work by Jan Steen, yet it missed a picture from the artist’s Delft period (1654-56). His time in Delft was crucial for the development of his style, therefore the Burgomaster and his daughter would crown the museum’s wide-ranging overview of his oeuvre.