A drawing stolen from the Swedish Academy before the war and donated in the 1950s to the Dutch state has been returned to its rightful owner. During the CODART ACHT study trip to Stockholm and surroundings, Charles Dumas of the Netherlands Institute for Art History (RKD) returned a missing drawing by Leonard Bramer to the Royal Swedish Academy of Art. 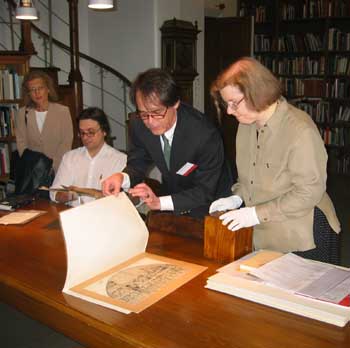 The drawing entered the RKD with the Piek collection in the 1950s. Other sheets from the donation were lent via the predecessor of the Netherlands Institute for Cultural Heritage to various Dutch museums and archives. However, because it bore the stamp of the Kungliga Akademien för de fria konsterna, the Bramer drawing was held back. An attempt at the time to arrange for its return was unsuccessful, for reasons that cannot now be ascertained. Nor is it known how the sheet entered the Piek collection. The assumption is that it was stolen before 1940 and was sold in the art trade.

As the CODART ACHT study trip loomed into view, Dumas, who is a member of the CODART program committee, took up contact with the chief curator of the Academy art collection, Eva-Lena Bengtsson, She was able to confirm that the drawing was missing and that it had not been de-accessioned. It was agreed that it would be returned during the trip.

The sheet measures 22.4 x 38.5 cm. It is drawn on both sides in pen and brush in India ink. The representations on both sides are designs for lunette-shaped wall paintings. One side shows a group of about 20 soldiers sauntering through an Italian town. On the other side there are about 12 soldiers looking over a balustrade.