The Art Newspaper reported today that the Rubenshuis in Antwerp will show a portrait of the artist´s daughter, previously deaccessioned by the Metropolitan, as an original Rubens in their upcoming exhibition Rubens in Private: the Master Portrays his Family.

A portrait of Rubens’ young daughter Clara Serena, recently deaccessioned by New York’s Metropolitan Museum of Art, is going on display at the Rubenshuis in Antwerp. In 2013, it was auctioned as by a “follower of Rubens”, with an estimate of $20,000-$30,000. Now upgraded as authentic, it will hang in the artist’s own house, in the exhibition “Rubens in Private: the Master Portrays his Family” (28 March-28 June).

The earliest certain provenance of the portrait goes back to a New York collector in the 1930s and it was considered authentic until the American specialist Julius Held downgraded it in 1959. The following year it was donated to the Met, where the late Walter Liedtke catalogued it as a copy after Rubens, probably 17th century. In 2013 it was deaccessioned by the Met, along with 15 other Old Masters, to benefit the museum’s acquisitions fund.

Entitled Portrait of a Young Girl, possibly Clara Serena Rubens and catalogued by Sotheby’s, New York, as by a “follower”, it fetched $626,500 (including buyer’s premium), nearly 20 times the high estimate. This suggested that at least two bidders thought that the painting was the real thing. It is now owned by a London collector, who has offered it on long-term loan to the Prince of Liechtenstein for his collection in Vienna and Vaduz. This is an appropriate loan, since the prince already owns an undisputed portrait of Clara, dating from around 1616.

Ben van Beneden, the director of the Rubenshuis, has accepted the former Met painting—now cleaned—as authentic. He dates it from 1620 to 1623, the year when Clara died at the age of 12. Katelijne Van der Stighelen, who wrote the exhibition catalogue entry and is working on a catalogue raisonné of Rubens’ portraits, also accepts the attribution.

The painting’s display in Antwerp, alongside the Liechtenstein portrait, which is also on loan, will give other specialists an opportunity to assess the former Met painting. However, David Jaffe, a London-based Rubens specialist (and former National Gallery senior curator), says he remains “doubtful” about the attribution to Rubens. 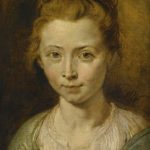 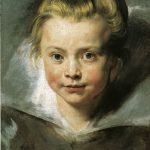