A painting by Dieric Bouts has been acquired by the Bowes Museum in County Durham. The Guardian reported today that St. Luke Drawing the Virgin and Child will remain in the UK after the government had an export bar placed on it last November. The privately owned painting was in the collection of the National Trust’s Penrhyn Castle.

The painting came to Penrhyn Castle when Edward, Lord Penrhyn bought it for about £100. In 1899, being in a bad state, it was found necessary to transfer it from panel to canvas, when it was discovered that the picture had been much repaired some time ago, several white patches appearing where the paint had been restored, but the heads and figures and all important parts of the picture were intact.

Information from The Guardian and the National Trust website. 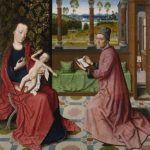