Over twenty silver objects, mostly cups, have been stolen from Museum Huis Doorn. Burglars gained access to the museum Sunday night, taking the items which represent a great cultural and historical value.

The museum, just outside the village of Doorn in the province of Utrecht faces troublesome times; The Dutch government wants to halve its subsidy to the museum. According to the museum’s board this will in all likelihood mean that the museum will have to be closed to the public. Next Thursday Dutch parliament will vote on the proposed budget cuts. Minister of Culture Jet Bussemaker suggested in a debate yesterday that Huis Doorn might be eligible for subsidy for projects on the First World War.

Huis Doorn was the refuge of Kaiser Wilhelm II, after his exile from Germany at the end of the first World War. With him came train loads of art and curiosities from Germany, including many Dutch and Flemish art objects. After the emperor’s death in 1941 and the end of the Second World War in 1945, the Dutch government confiscated the house and collection. As all the other Dutch former state museums, it has been privatized in 1994. 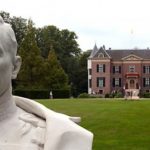