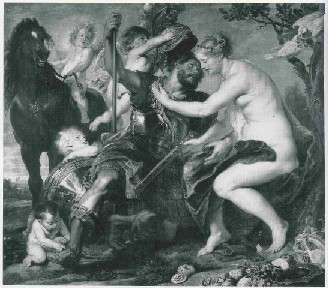 From The Art Newspaper, by John Varoli

A painting by Rubens, Venus disarming Mars (1615-20), once in the collection of the Rheinsberg Palace, Berlin, and believed to have been looted by Soviet troops from the Königsberg Castle, East Prussia in 1945, has been found by scholars in the State Hermitage Museum in St Petersburg. Mikhail Piotrovsky, the Hermitage’s director, said the painting will be cleaned anda displayed.

The painting measures 1.7 metres by 1.93 metres and has spent the past 60 years in the Hermitage’s “Spetskhran”, the formerly secret storage space for art taken from Germany after World War II by the Red Army, an area that has been off-limits even for the Hermitage scholars.

“I saw the painting for the first time last year, and I was quite surprised”, said Natalia Gretsai, curator of Flemish art at the Hermitage, adding that it is quite dirty but in good condition. “At first, we thought it belonged to Rubens’s workshop, but after more research we realised that it was an autograph work”.

According to documents shown to The Art Newspaper by Gerd Bartoschek, a curator at the Foundation of Prussian Palaces and Gardens in Berlin-Brandenburg, the painting bears the inventory number 228(4) of the Rheinsberg Palace. The same document shows that up until 1944 the Rubens was in the collection of the Konigsberg Castle in East Prussia, now the Russian province of Kaliningrad, indicating the work was taken as Soviet troops pushed toward Berlin.

Dr Bartoschek, who has published an inventory of 3,000 paintings missing from Germany since the end of the war, thinks the painting should be returned to Berlin. “In the 1990s, the Hermitage gave us a list of paintings from the Prussian castles in their secret storage, but there was no mention of the Rubens”, says Dr Bartoschek. “We think there are still more than 1,000 paintings from our collection in Russia.”

“Even if the Rubens painting would have to be returned, it would be sent to Konigsberg from where it originally came, which of course is now Russia’s Kaliningrad”, said Dr Piotrovsky.

The return of the painting is very unlikely. According to Russia’s law on Cultural Valuables, the painting cannot leave Russia, and may only be returned to Germany if compensation is paid.