Stedelijk Museum Alkmaar announces an outstanding acquisition on 7 June. A superbly preserved work painted around 1535 by Cornelis Cornelisz Buys (II) (1495/1500-1545) of Alkmaar, showing the biblical story of the Parting of Jacob and Laban. The museum and the city of Alkmaar are delighted that an anonymous private donor has offered to provide half the required funding for the acquisition: a gesture of unprecedented generosity in the history of the Alkmaar Museum. This, together with an equally unparalleled donation from Vereniging Rembrandt and support also from VSBfonds and the city of Alkmaar has enabled the museum to realise this acquisition. The work was acquired through London art dealer Johnny van Haeften Ltd, who recently presented it at TEFAF in Maastricht. It has formed part of a private collection abroad since 1987.

The Parting of Jacob and Laban is a superb example of the work of Cornelis Buys II, one of leading masters of 16th-century Alkmaar. Its exceptional quality, its majestic, powerful narrative character and the many striking details of the composition are certain to make this painting a favourite among museum visitors. It shows the story told in Genesis 31, in which Jacob leaves his father-in-law Laban, taking his wives and children along with his livestock, having worked for many years for his aging kinsman without any appreciable reward. By now, relations between the two men have reached a new low, and Jacob explains that an angel has appeared in a dream telling him to return to the land of his birth. Buys incorporated different episodes from the story into a panoramic landscape. In the foreground, Jacob (wearing a turban) appears beside the camel on which his wives Leah and Rachel are riding. Behind this, left, is the preceding episode, and on the right, the conclusion of the story. An essential aspect of the painting is its ‘wonderful narrative quality’. There are figures everywhere, all gesturing busily or casting meaningful glances at the viewer. The metallic sheen of the work is another striking aspect, as if the painting were made with bright enamel rather than oil paint. It is a characteristic feature of Buys’s oeuvre.

Cornelis Buys II was a key figure in Alkmaar’s art scene and part of a network of artists extending across northern Holland in the latter half of the sixteenth century. Buys started as an apprentice to his uncle Jacob Cornelisz van Oostsanen, the earliest artist in Amsterdam known by name. Buys’s oeuvre, which emerged between the years 1530 and 1545, is clearly influenced by the style of Jan van Scorel, who worked alongside him at Van Oostsanen’s studio. He evidently learned from his fellow apprentice, as the dynamic poses of his figures, the eloquent colours and the perspective of the landscape show.

Buys ran a prolific studio as an independent master in Alkmaar. Besides a small number of works by his own hand, several of his studio pieces also survive. The painting of Rebecca and Eleazar at the Well (private collection) is the only work signed by Buys, and forms the cornerstone for the reconstruction of his oeuvre. Around this work, a modest series of exceptional, independent paintings of the highest quality has been assembled. Foremost among these is a group of four fascinating depictions of the Last Supper. One of the most complete and attractive versions joined the Stedelijk Museum Alkmaar collection in 1981. A permanent loan from the Paling and Van Foreest estate, brought the only portrait definitely attributed to Buys to the museum collection, a portrait of Petrus Nannius, the famous humanist and master of the Latin School in Alkmaar.

These extraordinarily impressive works suggest that despite working in a relatively small town, Buys’s importance as an artist far exceeded that of a local master. The purchase of his Parting of Jacob and Laban will do much to encourage appreciation for the work of this ‘minor great master’ from Alkmaar and increase insight into his place among the giants of the art world, such as Scorel and Heemskerck. With the acquisition of the Parting of Jacob and Laban, Stedelijk Museum Alkmaar has added one of the most interesting of Buys’s works to its own and the nation’s collection. Today, the town in which Buys lived and worked is able to provide a balanced presentation of his independent work. Only in Alkmaar is it possible to recreate that impression of his oeuvre.

2014: On show at Van Oostsanen: The Unknown Master

The Parting of Jacob and Laban features in the major 2014 retrospective of the work of Buys’s uncle and teacher Jacob Cornelisz van Oostsanen (1470-1533).
Van Oostsanen: The Unknown Master is a joint presentation involving Stedelijk Museum Alkmaar and Amsterdam Museum, as well as Alkmaar’s St Laurens’s church, the Rijksmuseum and Radboud University. It is the first show to feature Van Oostsanen’s oeuvre alongside the work of his pupils and contemporaries. Van Oostsanen: The Unknown Master appears simultaneously in Alkmaar and Amsterdam from 15 March to 29 June 2014. 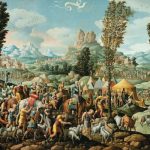