From the Art Newspaper, November 2007 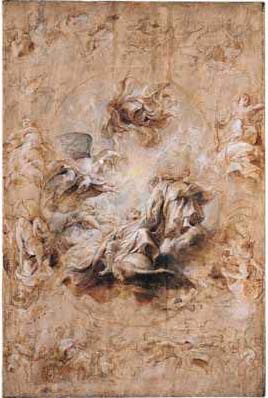 Tate is trying to buy Rubens’ sketch for the Whitehall Ceiling, which is being sold by Viscount Hampden. The Art Newspaper can reveal that the painting has noww been valued at £11.5m, but with the tax advantages of a sale to a public collection, it would cost the gallery £5.7m. Tate has submitted a grant application to the National Heritage Memorial Fund, for a sum which is believed to be over £3m., and this is expected to be considered later this month. An application is also being made to the Art Fund.

The historically important Rubens sketch, entitled The apotheosis of King James I was painted during the artist’s stay in London in 1629-30, for Inigo Jones’ recently erected Banqueting Hall in Whitehall. It was acquired by the second Viscount Hampden in the late 18th century, and has remained in his family for well over 200 years.

Since 1981 the Rubens has hung at the National Gallery, as an "anonymous" loan, but the gallery is now trying to buy the Poussin Sacraments and feels unable to also go for the Rubens. Since The apotheosis of King James I was painted in Britain, it galls within Tate’s remit. The Whitehall Ceiling sketch is temporarily on show in the Rubens retrospective at the Museum of Fine Arts in Brussels until 27 January 2008." Martin Bailey.