The Burrell Collection in Glasgow’s Pollok Country Park reopened to the public on Tuesday, 29 March 2022. The museum closed its doors in October 2016 to create a more modern, greener museum that will show more of the collection to visitors and give access to over a third more of the building.

The museum’s gallery space has increased by 35%, allowing important and unique objects from the collection, which have not been seen for decades, or have never been on permanent display, to go on show. New displays allow for a better understanding of the international significance of The Burrell Collection’s artworks and the people who made them and some of the people who have owned them. In total 225 displays are spread across 24 galleries. The displays include innovative digital elements such as video walls, interactives and hybrid systems created to help people engage with the stories behind the collection. 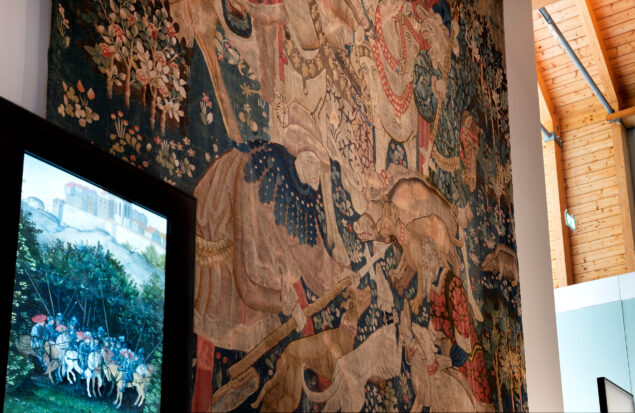 View of the East Galleries with the Boar Hunt tapestry which was made in the Southern Netherlands around 1435-50. Photo courtesy of © CSG CIC Glasgow Museums Collections.

Sir William Burrell (1861–1958) devoted more than 75 years of his life to amassing, along with his wife, Constance, Lady Burrell, one of the world’s greatest personal art collections, renowned for its quality of Chinese art, exquisite stained glass, and fine art. Tapestries represented one of the major interests of Burrell, making the Burrell Collection one of the largest and most important tapestry collections in the world. Over a period of 60 years, Burrell and his wife, decorated their homes extensively with many tapestries adorning the walls. The collection comprises 201 tapestries, of which circa 120 are attributed to Netherlandish weavers from the fifteenth and sixteenth centuries. Eight pieces are seventeenth- to eighteenth-century and are attributed to Dutch weavers. The collection also includes tapestries of German and Swiss origin, and some that were attributed to Flemish weavers working in England.