Today, the city of Leiden and Museum De Lakenhal have announced that they have acquired a painting by Rembrandt: The spectacles seller. Rembrandt painted the work around 1623-24 in his birthplace Leiden.

The painting was originally part of a series of five panels depicting the five sense. Of those paintings three are still known today. The panels depicting Touch and Hearing are in a private collection. Sight will now be the first painting by Rembrandt owned by the city in which he was born.

The panel is bought with support by Vereniging Rembrandt, Mondriaan Fonds and Vereniging van Belangstellenden in De Lakenhal (VBL) 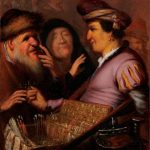