The city of The Hague may not sell their portion of Jan Steen’s The wedding night of Tobias and Sara to the Goudstikker heiress, as per the court’s decision on 5 February.

The city of The Hague received the right side of the painting The archangel Raphael from the bequest of Abraham Bredius’ testament which stated that it should remain in the Museum Bredius in The Hague. The city had petitioned the court to annul this requirement in order to be able to sell their portion for about 622.000 euro to the Goudstikker heiress Marei von Saher. That request was denied by the court. 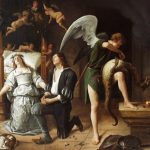