Jheronimus Bosch’s The Haywain will return to the Netherlands for the first time in 450 years. The large triptych will leave the collection of Museo Nacional del Prado to feature in two Dutch exhibitions. The artwork will first be shown at Museum Boijmans Van Beuningen in the exhibition titled Uncovering Everyday Life: From Bosch to Bruegel. Afterwards it will move to the Noordbrabants Museum for the retrospective Jheronimus Bosch: Visions of a Genius. This unique loan marks the celebration of the 500th anniversary of the death of Jheronimus Bosch. The painting will return to Madrid in time for the exhibition El Bosco in the Prado, where it will be on show together with the artist’s masterpiece, The Garden of Earthly Delights.

‘The Haywain’ is one of the masterpieces in the collection of the Museo Nacional del Prado in Madrid. King Philip II of Spain was an avid collector of Bosch’s work and bought this triptych for his private collection in 1570. The work, which has not left Spain since it was acquired, is coming to the Netherlands in superb condition after restoration some years ago. In the painting a procession of people walks behind a haywain, a metaphor for materialism, straight into hell. In the foreground we can see medieval scenes with drunken monks, teeth-pullers, merry musicians and fortune-telling gypsies. A pair of lovers sits atop the haywain, an angel and a demon on either side: existing and new traditions come together.

‘The Haywain’ is one of the first paintings in art history to depict everyday scenes. Painters in subsequent generations made these scenes the main subjects of their paintings. In his work Jheronimus Bosch showed worlds his contemporaries had not thought possible. His characteristic panels and triptychs, full of illusions and hallucinations, extraordinary monsters and nightmares, present an unequalled picture of the major subjects of the time – temptation, sin and accountability. 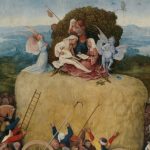 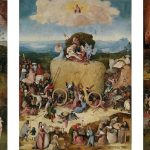