The Mauritshuis has acquired a new painting by Jan Steen (1626-1679). It is the exceptional history painting Moses and Pharaoh’s Crown from circa 1670. The painting was on display in the museum since October 2008 as a loan from a private collection. The acquisition has been made possible thanks to the support of the BankGiro Lottery.
The museum already owns a superb collection of fourteen paintings by Steen, but until now, however, a history painting by Steen was lacking, so Moses and Pharaoh’s Crown represents a very welcome addition to the Mauritshuis’s collection.

The skilfully painted canvas depicts a little-known episode from the childhood of Moses and demonstrates Jan Steen’s exceptional talent as a storyteller. The story does not appear in the Bible. We see the prophet as a whimpering toddler, seeking refuge in the arms of his foster mother. Behind the child, the pharaoh sits slumped on his throne as an advisor bends forward and whispers in his ear. As related in the story, Moses had trampled on the pharaoh’s crown whilst playing. As a result the pharaoh’s advisors wanted him dead, believing to have seen in him an enemy of the Egyptian Empire. But the young boy was given a last chance to prove his innocence: in a test he chose a burning coal over a dish of gold and burned himself by placing the coal in his mouth. 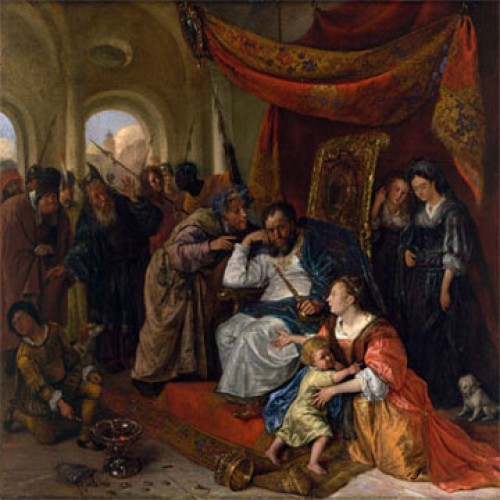