This month the Mauritshuis will complete an important and potentially hazardous phase in its large-scale renovation and extension: the underground foyer is finished and the demolition activities in the seventeenth-century mansion and the building opposite at Plein 26 are coming to an end. This provided the Mauritshuis with a good reason to invite the press for a tour, also giving a member of CODART’s staff a chance to have a look around. Now that the basic structure has been completed, work can begin on the interior. The museum will reopen approximately one year from now, in mid-2014.

The phase about to be completed has been difficult and rather dangerous. It entailed the construction of an underground foyer between the Mauritshuis and the building on the other side of the street, at Plein 26. The complexity of this operation has been compounded by the location of these premises in the very heart of The Hague. This allows the builders very little room to maneuver, because of the museum’s eminent neighbors: the office of the Dutch premier is just next to the Mauritshuis, and the building next to Plein 26 houses the King’s Office (Kabinet van de Koning).

The tour of the building site gave an impression of what to expect in 2014. Visitors to the Mauritshuis will enter the forecourt and descend to the underground foyer. The term “tunnel” has been banned, and rightly so, because the foyer is spacious and high, and better equipped for the growing stream of people than the old side entrance on the Korte Vijverberg. A lift will convey visitors from the foyer directly to the entrance hall of Johan Maurits’s mansion; they will no longer have to enter through the basement, as was previously the case. The furnishings are intended to preserve the character of the old building. In fact, some details, such as the windows, are based on the original designs by Pieter Post, the architect of the Mauritshuis. The new windows will have crossbars, which were common in the seventeenth century.

The “new building” at Plein 26 will house not only such facilities as the museum shop, the restaurant and the educational department, but also an exhibition space. This space is not very large, but it has a high ceiling, which makes it possible to hang large works. In recent years the Mauritshuis has held a series of small, focused exhibitions, and this space will provide the perfect venue for their continuation. 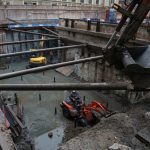 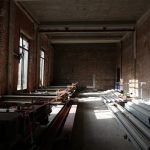