From the KMSKA press release

This morning, the distinguished Rembrandt specialist and driving force behind the Rembrandt Research Project, professor emeritus Ernst van de Wetering, confirmed that The Preacher Eleazar Swalmius of the Koninklijk Museum voor Schone Kunsten in Antwerp, is a real Rembrandt.

With this declaration, a discussion lasting centuries long, has come to an end. In 1886 the KMSKA purchased the painting as a master work from Rembrandt, but its authenticity was debated in the 18th, 19th and 20th centuries. Nevertheless, the painting carried Rembrandt’s signature and the year 1637 (Rembrandt. f. 1637). But because of its weary status and lack of space in the museum, it was at times left forgotten in the museum depot.

After its restoration and the uncovering of a thick varnish, new details were brought to light, which also provided reasons to take yet another look at its attribution. After close study from prof. em. Ernst van de Wetering all doubts were brought to rest. The reasons for the attribution were explained in this morning’s press conference in Belgium. The linen used as the canvas for the work came from the same rol as other known works by Rembrandt (The blinding of Samson of the Städel Museum, Frankfurt and Danaë, Hermitage, St. Petersburg). The signature is identical to that of A Polish nobleman from the National Gallery of Art in Washington also dated 1637.

The painting can be viewed during the upcoming Antwerp Museum night on 8 August. It will hang until 30 September in room E of the KMSKA between the Portrait of Saskia van Uylenburg, wife of Rembrandt, attributed to Rembrandt’s pupil, Carel Fabritius, and the Portrait of a woman by Jacob Adriaensz. Backer, two portraits which the museum bought in the same lot as the Rembrandt.

For the complete press release in Dutch click here 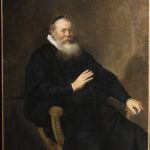