The Toledo Museum of Art (TMA) has acquired a stunning example of portraiture by Dutch Master Frans Hals with the purchase of Family portrait in a landscape. Scholar Gregory Martin referred to the painting as “an extraordinary picture for the 1620’s that underlines Hals’s inventive genius. Nothing like it—for breadth and relaxed tone—had been painted in the Netherlands before.”

Family portrait in a landscape (early 1620’s) is a large work (60 x 64 ¾ inches/151 x 163.6 cm) that will take its place in the Great Gallery near Rubens’s The Crowning of St. Catherine and Guercino’s Lot and His Daughters, the Museum’s most recent Old Master acquisition, which came into the collection in 2009.

“This painting is a tremendous addition to our collection of European paintings,” said TMA Director Brian Kennedy. “It is one of only four known family portraits by Hals to have survived and is the earliest of the four. Its strong composition and the way Hals captures the personalities and personal interactions of the family members will delight our visitors.”

A Masters Series lecture in the Peristyle Theater followed by a public viewing in the Great Gallery will introduce the work to Museum members and the general public. The public unveiling event will take place on Thursday, Oct. 13 at 6 p.m. and is free and open to the community. The evening’s speaker will be Pieter Biesboer, emeritus curator of paintings at the Frans Hals Museum, Haarlem, the Netherlands, and an expert on the artist.

The Toledo Museum of Art is world-renowned for the breadth and quality of its collection of 17th-century Dutch and Flemish paintings by artists such as Rembrandt, Terbrugghen, Cuyp, Rubens, Jordaens and many others. However, the absence of a work by Frans Hals, a portrait painter second in fame and reputation to only Rembrandt himself, left a noticeable gap in the collection.

Larry Nichols, William Hutton senior curator of European and American painting and sculpture before 1900, first saw Family Portrait in a Landscape in the gallery of a London art dealer in July 2010. Within days he made contact with the Museum’s incoming director, Brian Kennedy, asking to put the exciting discovery on hold for TMA, meaning the Museum had right of first refusal should another offer be made. Kennedy agreed, and the yearlong process of research, conservation assessment, art committee approval, negotiating the terms of the sale and then obtaining an export license from the British government began. That license was granted on July 11, 2011 and the painting was destined for Toledo.

The painting was the only Hals group portrait still in private hands. The work was acquired by a British viscount, Lord Boyne, in the mid 19th century and passed down to his heirs. The family portrait had been on extended loan to the National Gallery of Wales prior to its sale.

Family portrait in a landscape depicts a father, mother and seven of their 10 children. According to Nichols, the original canvas featuring all 10 children was at some point cut down and the three children to the far right became a separate painting. That work, referred to as Three children and a goat cart, was donated to the Musées Royaux des Beaux-Arts de Belgique in Brussels in 1928. It is hoped the two canvases can be reunited for a focus exhibition traveling to both venues, something that has not happened for more than 20 years.

When and why the family was split remains a mystery, but the answer is likely a matter of practicality. A later owner may not have had sufficient wall space to display the painting intact, necessitating the division into two works.

Another interesting part of the portrait’s history is the fact that Hals painted only nine of the 10 children depicted. The 10th child, who was born after Hals finished the original work, was added by artist Salomon de Bray in 1628, as noted by his signature on the infant daughter’s left shoe. Why Hals did not paint the new addition to the family is yet another mystery, but the practice of modifying family portraits was relatively commonplace in the 17th century.

One fact that is no longer a mystery is the identity of the family portrayed. Scholar Pieter Biesboer, the featured speaker at the unveiling event, found documentation identifying the sitters as Gijsbert Claesz.van Campen, his wife and their 10 children, seven daughters and three sons. The couple had married in 1604, and the possibility exists that they had commissioned Hals in 1624 to represent them on the occasion of their 20th wedding anniversary.

Frans Hals (1582/83–1666) was a master of capturing the personalities of his subjects through their poses and facial expressions. His characteristically loose brushstrokes captured a sense of life and motion that escaped many of his contemporaries who adopted the traditionally smooth, more controlled application of paint. His extraordinary technical skill and ability to make each individual stand out in a group portrait led French artists such as Claude Monet, Gustave Courbet and Édouard Manet to visit Haarlem two centuries later to admire and study his work.

Hals was born in Antwerp but fled the city with his family during the Fall of Antwerp, settling in Haarlem, where he lived the rest of his life. He painted the wealthy citizens of Haarlem and was well known for his group portraits of the civic guard officers. Hals had at least 14 children, 11 of whom were from his second marriage. Five of those sons followed in their father’s footsteps to become painters themselves.

The acquisition was made possible in part by a major bequest from the estate of Jill Ford Murray, which the Museum received around the same time the painting became available. Murray, an heiress to the Ford Motor Company fortune who died in 2004, was a long-time supporter of the arts. She left the bulk of her estate to the Toledo Museum of Art and Detroit Institute of Arts. Additional funds were provided by the Libbey Endowment, a gift of Edward Drummond Libbey.

“Benefactors like Edward Drummond Libbey and Jill Ford Murray have enabled the Museum to acquire singular great works by great artists,” said Brian Kennedy. “Their foresight and generosity not only make these types of major acquisitions possible, they create a legacy of art and excellence that this community has enjoyed for more than 100 years.” 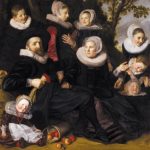