The art that was stolen in 2005 from the Westfries Museum in Hoorn is located in Ukraine. All attempts to recover the seventeenth-century paintings and bring them back to Hoorn have failed, however. Contact with the present owners of the stolen art, as well as diplomatic efforts on the highest levels have not amounted to anything. Because the collection may be on the brink of being sold to others and because it is in a steadily deteriorating condition, Hoorn is now looking for publicity on a national as well as international scale to deter potential buyers and to expose the practices of the Ukrainian art criminals who have contacts on the highest political levels.

On the night of 9 January 2005, 24 paintings and 70 pieces of silverware were stolen from the Westfries Museum during a burglary. These included works by Jan van Goyen, Jacob Waben, Matthias Withoos, Jan Rietschoof, Jan Linsen and Herman Hengstenburgh. For years, the municipality of Hoorn had been hoping that the paintings and silver would resurface. In July 2015, two individuals reported to the Dutch embassy in Kiev who said that they represented a Ukrainian volunteer battalion. This OUN militia claimed to have the complete collection of stolen paintings from the Westfries Museum in their possession. A photo showing one of the paintings accompanied by a current Ukrainian newspaper was presented as proof for this claim.

The Westfries Museum has but one interest: to return the looted art to Hoorn as soon as possible before the collection is sold off in parts or deteriorates any further. According to the museum director Ad Geerdink: “We have done everything we can and have reached a dead end. Now that it seems that the art works are disappearing again, we want to sound the alarm to let potential buyers know that they are dealing with stolen art, to give a correct representation of the actual value of the art works, but also to send a signal that these art works only belong in Hoorn. They are invaluable to the story we are telling about the extremely riveting period of the Golden Age in West Friesland.”

For more information and a complete list of stolen objects see www.westfriesmuseum.info/stolen-art 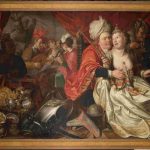 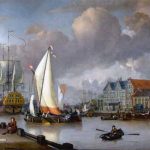