The city of The Hague agreed to pay 1 million euros to the heirs of Jewish art dealer Jacques Goudstikker whose gallery was looted by Hermann Goering for part of a Jan Steen painting that was in fragments until 1996.

The (smaller) right side of the painting was given to the city of The Hague in 1922 by Abraham Bredius, together with the rest of his collection. He had bought the painting in 1907. In 1985 the collection moved to the current location at the Lange Vijverberg in The Hague.

The left part was in the gallery of Jacques Goudstikker when he feld Holland in May 1940. Goudstikker died during the crossing to England. His gallery was consequently looted by Hermann Goering for his own collection. after the war most of Goudstikker’s paintings, including the Jan Steen-fragment were returned to the Netherlands, where they became part of a collection of paintings which were managed by the Dutch state. Some of them were loaned to Dutch museums.

In 2006 the Dutch state decided to return the paintings from the Goudstikker collection to his heirs. The Steen posed a particular problem. In 1996, on the instigation of art historian Albert Blankert, the Bredius-fragment and the Goudstikker-fragment were rejoined..

Though the Dutch government agreed to return its part of The Wedding Night of Tobias and Sarah in 2006, the prior joining of the two separated fragments led to a dispute over who should get the complete painting. The two parties began negotiating a settlement more than two years ago.

Marjolein de Jong, deputy mayor in charge of culture in The Hague, wrote in a statement sent by e-mail that the agreed price is lower than Von Saher’s initial demands for 1.8 million euros and said the accord “helps preserve the painting for The Hague and future generations.”

The Dutch government and Mondriaan Foundation will contribute 400,000 euros toward the settlement, according to Esther Andoetoe, a spokeswoman for The Hague. The Rembrandt Association will pay 200,000 euros. The cultural budget of The Hague will fund 92,000 euros and 308,000 euros comes from insurance money for the loss of two other paintings, she said. 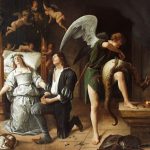