The Scottish National Portrait Gallery (SNPG) will open on 1 December, following an ambitious £17.6m restoration project and with an entirely new presentation of its world-famous collection. The project – the first major refurbishment in the Gallery’s 120-year history – has restored much of the architect’s original vision, opening up previously inaccessible parts of the building and increasing the public space by more than 60 percent. It has also added a range of new facilities that will utterly transform visitors’ experience of the Gallery. Entry to the new Portrait Gallery will be completely free.

The new displays will follow a chronological pattern but will also focus on various themes and subjects in greater depth, exploring the richness of Scottish history and culture in a more cohesive and interconnected way, and telling the story of its people and places through the lens of the visual arts. Individual portraits – from Mary, Queen of Scots to Dr Who actor Karen Gillan – will be set in a broader context of thematic displays ranging from the Reformation to the present day.

There is a surprisingly strong presence of Dutch and Flemish artists throughout Britain in early modern times. Scotland is by no means an exception. The Scottish National Portrait Gallery holds works by Antony van Dyck, Jan Lievens and Daniel Mytens, but also 16th-century court painters of Netherlandish descent, such as Arnold Bronckorst and Adrian Vanson.

Two of the inaugural exhibitions contain a significant amount of Dutch and Flemish content: Reformation to Revolution and John Slezer: A Survey of Scotland. 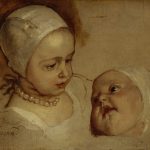