With his successful defense of the dissertation “Frans Pourbus le Jeune (1569-1622): entre Habsbourg, Médicis et Bourbons,” Blaise Ducos, curator of Dutch and Flemish painting at the Louvre, was awarded a doctor’s degree. He has announced his intention of publishing his book at the earliest opportunity.

CODART heartily congratulates our long-time member for having triumphed in this ordeal. 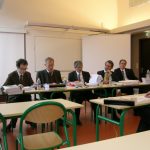