With great sadness we have learned of the untimely death of Michiel Jonker on 22 March. Only three months ago Michiel, together with his wife Ellinoor Bergvelt, were the initiators of a CODARTfocus day in the Dulwich Picture Gallery in London, where they were working on a catalogue of the Dutch and Flemish collection. It is incomprehensible that our enthusiastic and warm host on 2 December has now passed away. Our thoughts are with Ellinoor and family.

Michiel Jonker was born in Amsterdam on 20 August 1947. After studying art history at the University of Amsterdam, he started his career in December 1971 as curator of books, prints and drawings in the Amsterdams Historisch Museum. Later he also served the museum as curator of paintings and as head of collections. In 1995 he left Amsterdam to become head of collections in the Mauritshuis in The Hague. In 1998 he left the museum to become an independent scholar working on many projects. His last project was the catalogue of Dutch and Flemish paintings in the Dulwich Picture Gallery in London, that he unfortunately never will see finished. 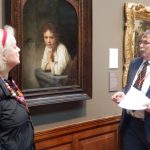