In the 1960’s Van Asperen de Boer developed Infrared reflectography (IRR) while working at the Centraal Laboratorium voor Onderzoek van Voorwerpen van Kunst en Wetenschap (central laboratory for the research of art and scientific objects). His dissertation Infrared reflectography: A contribution to the examination of earlier European paintings, published in 1970, marked the beginning of a new era for technical art history.

Van Asperen de Boer’s IRR camera used infrared light to penetrate opaque paint layers and show any underdrawing. The camera could only capture a small part of the paint surface and multiple images were joined together to create a complete image of the underdrawing. The mosaic of these images was created in the early days using photographic prints. Van Asperen de Boer donated his research archive to the RKD – Netherlands Institute for Art History.

From 1976 to 1997, Van Asperen de Boer taught at the University of Groningen, where he was appointed professor in 1987. In Groningen he introduced many art historians, including many CODART members to the world of Infrared reflectography and multidisciplinary research. The bundle Album Discipulorum was published upon his retirement in 1997. In 2012 Van Asperen de Boer was interviewed by Arie Wallert for the 75th anniversary of the Association of Dutch Art Historians (VNK), the article in Dutch is available online. 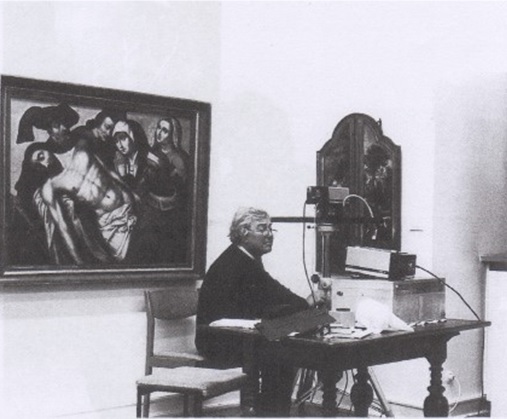