This publication demonstrates the variety of ways in which ongoing research and the development of new technology can serve to revive the splendor of fragile tapestries kept in European and American museums.

As the Royal Manufacturers of Tapestry, De Wit has been a leading force in undertaking the most pioneering and impressive restoration and conservation campaigns for more than a century. The entrepreneurial and artistic strategies that marked the beginning and subsequent development of De Wit, are extensively discussed in the first part of this book.

Koenraad Brosens provides an in-depth analysis of the roles played by the three directors of the Royal Manufacturers – from founding father Theophiel De Wit, to Gaspard De Wit, to current director Yvan Maes De Wit. Each of these individuals’ choices have been closely linked to the increasingly rapid and significant developments in the European and American tapestry landscapes. The second part of this volume, by Yvan Maes De Wit, surveys the most pioneering and impressive restoration and conservation campaigns undertaken by the Royal Manufactory. Through its original and creative scope of investigation, this book aims to make an invaluable contribution to art-historical discussion and research on nineteenth- and twentieth-century tapestry production, restoration and conservation. 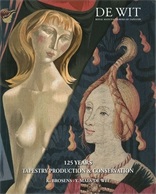