On 12 and 13 October 2022,  a conference about the relatively unknown Flemish painter and draftsman Peter (Pieter) van Lint (1609–1690) will be organized at the Martin von Wagner Museum of the University of Würzburg. The conference is a cooperation between the Institute of Art History of the Julius-Maximilians-Universität Würzburg (Prof. Dr. Eckhard Leuschner) and the State Academy of Fine Arts Stuttgart (Prof. Dr. Nils Büttner), and is supported by the Wolfgang Ratjen Foundation in Vaduz.

The Martin von Wagner Museum owns pages from an art-historically significant, but so far little studied sketchbook that the Flemish painter and draftsman Peter van Lint filled on his voyage to Italy and then during his stay in Rome, which lasted from ca. 1630 to 1639. Together with another, earlier sketchbook in the Fondation Custodia, Paris, these drawings represent the largest single holding of works on paper by Peter van Lint.

In his Würzburg drawings, van Lint has depicted with keen attention and great technical skill travelers, washing women, revelers, card players, and other “common people”. In addition to that, he has also included animals, especially dogs, pigs and horses, and various plants. Among the portraits, Giuseppe Drei (son of van Lint’s landlord in Rome and collaborator of Bernini), and Cardinal Francesco Barberini – observed unwittingly – stand out. 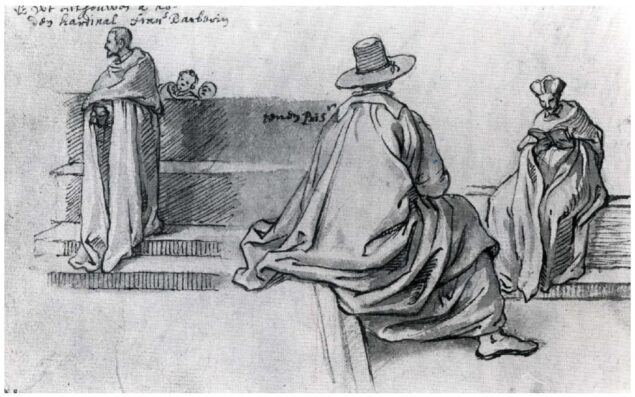 The Würzburg sketches, some of which are inscribed ‘naer het leven’, are important examples of the drawing practice of Flemish, Dutch, and German artists active in Italy in the circle of the “Bamboccianti” and “Bentvueghels” during the first phase of the High Baroque. Peter van Lint, however, is also known for quite different drawings he produced in Italy: his highly finished studies of ancient sculpture and copies of paintings by Raphael. Considered as a whole, therefore, van Lint’s graphic oeuvre is a perfect case for the study of the ways in which the artists of his era adapted their drawing style to a drawing’s function(s). His stylistic flexibility can also be deduced from the fact that the subject matter of his paintings has little to do with those by Pieter van Laer, Jan Miel or Andries Both, as allegories and religious subjects prevail, culminating in van Lint’s wall and ceiling paintings in the style of Domenichino in the Cappella del Crocefisso (Cappella Cybo-Soderini) in the Roman church of Santa Maria del Popolo.

The conference will connect an exemplary case of artistic migration between the Southern Netherlands and Italy in the first half of the seventeenth century with questions of the cultural factors that determined the choice of style and subject matter in the art of drawing, including systems of patronage, national networks, and the art market. Contributions can either be dedicated to van Lint’s drawings or to other draftsmen from the Netherlands and Germany in Italy during the 1620s to 1640s, with special emphasis on those artists from Flanders who, as van Lint, had no close connection with Peter Paul Rubens or his workshop.

The contributions of the conference will be published in a printed volume. Hotel accommodation will be provided, travel expenses will be reimbursed up to a maximum of 250 Euros.