The Metropolitan Museum of Art in New York has published a catalogue of early German paintings. More information, and a particularly generous preview, can be found on the museum’s website.

In conjunction with the grand reopening in May 2013 of the newly renovated European Paintings galleries, the Museum is pleased to present this comprehensive catalogue of our early German paintings. The collection has not been examined in its entirety since 1947, when (at half its current size) it was included in A Catalogue of Early Flemish, Dutch and Germany Paintings by Harry B. Wehle and Margaretta M. Salinger. Our seventy-two paintings constitute the largest, most diverse collection of its kind in America and include examples by the foremost German artists of the period: three by Dürer, eighteen from the Cranach group, eleven by Holbein and his workshop, and remarkable works by Hans Baldung, Hans Süss von Kulmbach, and Hans Schäufelein.

Rigorous review of current knowledge, fresh consideration of previously unresolved questions, and full technical examination with the most up-to-date methods have resulted in invaluable reassessments of attribution and dating. As a result, each painting is situated more accurately within the context of the history of German art. Beyond these time-honored issues of connoisseurship, however, the volume offers a rich understanding of an era that stretched from the late Middle Ages into the Renaissance. It provides both a record of the devotional practices of the time and a deeper look at the secular themes that began to emerge. It brings to life the favored mythological subjects that so captivated the dukes of Saxony and their courtiers. Taking us back to the turbulent times of the Reformation, it discusses the spiritual, educational, and propagandistic aims of such key personalities as Martin Luther, Erasmus, and Albrecht of Brandenburg. In its many portraits, it reflects the increased awareness of the individual in the age of humanism. Above all, the catalogue encourages a closer look at the paintings themselves, now seen in a new light, both here an in our galleries. 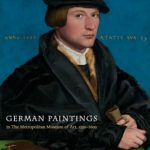