Information from the museum, 5 March 2012

On Wednesday 7th March the Art Museum of Timişoara will present the illustrated general catalogue of its collection of European Painting from the 15th to the 20th century at 17.00 o’clock in the Baroque hall of the museum. The catalogue covers the museum’s entire collection of European paintings and portrait miniatures from the Italian, Netherlandish, Dutch and Flemish, Belgian, German and Austrian, Hungarian and French Schools (476 items). The text is in Romanian and English.

The Art Museum of Timişoara publishes the first Illustrated general Catalogue of European Painting, that offers the outcome of the researches carried out during the period 2001 to 2011 regarding the history of the provenance and attributions, epochs and artistic schools of the paintings and portrait miniatures of the European collection of the Art Museum of Timişoara.

The 427 paintings (82 Italian paintings, 23 Netherlandish, Flemish and Dutch, Belgian, 110 German and Austrian, 177 Hungarian, 26 French, 9 pertaining to other schools ) and 49 portrait miniatures, which have been the objects of researches, come from Zsigmond Ormós’s collection (Pecica, 1813 – Budapest, 1894), from purchases and gifts, as well as from transfers from the National Art Museum of the S.R. of Romania Bucharest (1967).

Through the bequest of the 18th of September 1895, the majority of the painting in Ormós’s collection entered the inventory of the Historical and Archaeological Society of Banat (Timişoara), thus representing the nucleus of the present-day European paintings, prints and drawings collection (from 15th to 20th centuries) of the Art Museum Timişoara. In his quality as the Prefect of the Timiş County in the second half of the 19th century, collector and art historian, Zsigmond Ormós’s pioneer work in the field of museology in Banat led to the publishing of the catalogue of his own art collection in 1874 (second revised and enlarged edition in 1888), making an outstanding contribution to the establishment of the Historical and Archaeological Society of Banat (1872), to the publishing of the society’s issues, as well as to obtaining a building for the Timişoara museum .

In the entirety of Ormós’s collection, Italian painting occupies an important place in terms of both value and number, revealing the art collector’s preference for the 16th to the 18th century Northern Italian art. First hand paintings, copies after great masters and questioned paternity or with an unidentified author are published in the catalogues of the collection written by Ormós in Timişoara in 1874 and 1888 – Italian, Netherlandish, Flemish and Dutch, German and Austrian, Hungarian and Banat paintings.

The most mentioned artistic painting centre in the 1888 catalogue is Venice with paintings attributed to Giovanni Bellini, Cima da Conegliano, Giorgione and Titian, Gregorio Lazzarini, Giovanni Battista Piazzetta, Domenico Maggiotto and Giovanni Battista Pittoni. The Naples school is represented by a highly prestigious name for the 17th century: Luca Giordano, present with two paintings depicting scenes from the life of Alexander the Great, and the Roman school with paintings attributed to Pietro da Cortona, Lazzaro Baldi, Carlo Maratta and Pompeo Batoni. The Emilia school (Bologna) has been illustrated with the paintings of Agostino Carracci, Guido Reni, Francesco Gessi and Marcantonio Franceschini, and the Florentine artistic centre with the paintings of Andrea del Sarto, Perugino and Cosimo Ulivelli. Also, copies after Rafael, Giorgione, Titian, Paolo Veronese, Tintoretto, Correggio and Guido Reni could be encountered in the collection. Among the authors of the drawings, the most prestigious names belonged to the Italian schools: Andrea Mantegna, Tintoretto, Agostino Carracci, Giovanni Battista Piazzetta and Giovanni Battista Tiepolo. In the catalogue, the paintings are ranked alphabetically after the artist’s name. Studying the collection during the last century has led to the conclusion that most of these attributions are erroneous. Ormós has obviously collected according to his taste and for the delight of his eyes, thus owning all types of paintings, from religious and mythological themes to portraits, landscapes and still lifes, genre scenes, historical themes and allegories. Also, Ormós’s collection included paintings attributed to Nethelandish, Flemish and Dutch schools (Jan Fyt, Philips Wouwerman, in the manner of Rembrandt, Frans Pourbus the Young, copy after Anthon van Dyck, Jan Le Ducq), German (school of Lucas Cranach the Elder, school of Albrecht Dürer, Asam Cosmas Damian, Maximilian Schmaedel, Ludwig Thiersch) and Austrian (Johann Kupetzky, Anton Ignaz Hamilton), Hungarian (Johann Donát, Antal Fialla, Ede Komlóssy, Antal Ligeti, József Marastoni, Károly Markó the Young) and French (manner of Eustache Le Sueur) artists from the 15th to 19th centuries, together with copies after Rembrandt van Rijn, Pieter Paul Rubens and Anthon van Dyck’s paintings and over 620 engravings and drawings (attributed to Cornelius Bloemaert, Jacques Callot, Dominique Nollet and Johann Kupetzky).

Collector Ormós Zsigmond’s complex personality, an intellectual of fine erudition, is also proved by his personal art library, presented in the 1888 catalogue and which contains books and dictionaries especially linked to his research and study interests: 16th and 18th centuries Italian art. Zsigmond Ormós had written three monographic works about Raphael (1867), Giorgione (1872) and Johann Kupetzky (1888).

This first general illustrated catalogue records the various opinions of Romanian museum curators who have dealt with promoting this inventory through exhibitions and articles, as well as the opinions expressed by foreign specialists.

Researching this European painting inventory resulted in reviewing and changing some initial attributions that had proven wrong, as well as including some anonymous works in provincial schools or in certain prestigious artists’ sphere of influence.

During the 2005–2006 academic years, as a scholar of the Roberto Longhi Institute of Art History Studies in Florence (president – Mina Gregori), and during the 2006–2007 and 2007–2008 academic years, as a beneficiary of the research and post–graduate training scholarship „Nicolae Iorga” granted by the Romanian Institute for Culture and Humanistic Research of Venice (Directors Acad. Prof. Ioan Aurel Pop and Monica Joiţa, Ph.D), I have undertaken documentation and research work regarding the Italian painting and graphic arts fund within the project entitled „Italian painting and graphic arts, during the 15th and 19th centuries, in the Art Museum of Timisoara Inventory catalogue". Along with the systematization of the iconographic aspects of the 250 works of Italian painting and graphic arts, I also aimed at reviewing the attributions, the dating and the inclusion of these works into art schools, and, perhaps suggest some changes or propose possible identifications, if the research provided sufficient arguments in this respect.

The research regarding the painting of the Low Countries was supported by the CODART organization (International network for curators of art from the Low Countries, director Gerdien Verschoor), the RKD (Rijksbureau voor Kunsthistorische Documentatie, director Prof. Rudolf E. O. Ekkart) from The Hague and the Amsterdam/Maastricht Summer University (AMSU) in 2009 (Amsterdam, The Hague, Haarlem, Delft, Enschede, Rotterdam).

In studying the 19th and 20th centuries paintings collection (the Hungarian, Austrian and German schools) I benefited from Mrs. Elena Miklósik constant and unceasing support, who had the generosity to share research results recorded in archives and libraries regarding 19th century Banat painting, and the influence of the Art Academies in Budapest, Vienna, Berlin, Munich and Düsseldorf on the artistic manifestations in this region. 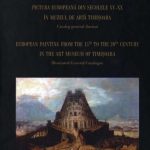