The theme of this full color volume is Trading Values in Early Modern Antwerp.

In his Descrittione di tutti i Paesi Bassi of 1567, the Italian merchant and humanist Ludovico Guicciardini described Antwerp as the warehouse of the world where all kinds of commodities were traded and displayed. Early modern Antwerp’s pre-eminent position depended upon links between material trade and exchange and the circulation of information, knowledge and beliefs. In this multidisciplinary volume of the NKJ, articles by leading scholars in the fields of art and material culture, literature and history explore ways in which value was propagated in the city from its so-called golden age, before the Revolt of the Netherlands, far into the seventeenth century.

Arjan van Dixhoorn, "The values of Antwerp and the prosperity of Belgica. Political economy in Guicciardini’s Descrittione di tutti i Paesi Bassi (1567)"

Sven Dupré, "The value of glass and the translation of artisanal knowledge in early modern Antwerp"

Koenraad Jonckheere, "An allegory of artistic choice in times of trouble. Pieter Bruegel’s Tower of Babel "

Ralph Dekoninck, "A graphic Koiné for a new religious value. The visual translatability of the Evangelicae Historiae Imagines"

Raingard Esser, "The diamond of the Netherlands. Histories of Antwerp in the seventeenth century"

See the publisher’s website for prices and more information. 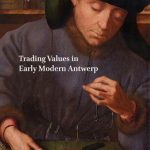