Abbie Vandivere, “Innovative Painting Techniques of the Sixteenth-Century Leiden School”
A technical investigation of paintings by Cornelis Engebrechtsz, Lucas van Leyden, and Aertgen van Leyden focusing on the visibility of underdrawing, the use of isolation layers and underlayers, unconventional sequence used to apply paint layers, and other effects.

Michele V. Packer, “Building up and tearing down: the persistent attraction of images of demolished buildings in seventeenth-century Dutch art”
This article argues that images of recently demolished buildings — Blockhouses on the Amstel and Heiligewegspoort in Amsterdam — served as collective memories of political and social events associated with their demolition, and through owning and viewing allowed people to express their own positions on these events.

Gero Seelig, “Gerhard Morell and the Last Acquisitions of Christian Ludwig of Mecklenburg-Schwerin"
The Sentry by Carel Fabritius, as well as numerous other paintings in the Schwerin collection, all appear in a recently discovered invoice for duke Christian Ludwig, submitted by the Hamburg art dealer Gerard Morell in August 1755.

JHNA is the electronic journal of Historians of Netherlandish Art. Founded in 2009, the journal publishes issues of peer-reviewed articles two times per year. These articles — both longer essays and shorter notes — focus on art produced in the Netherlands (north and south) during the early modern period (c. 1400-c.1750), and in other countries and later periods as they relate to Netherlandish art. This includes studies of painting, sculpture, graphic arts, tapestry, architecture, and decoration, from the perspectives of art history, art conservation, museum studies, historiography, and collecting history.

The next formal deadline for submission of articles is March 1, 2012 (for publication in 2013), although authors are encouraged to submit at any time. 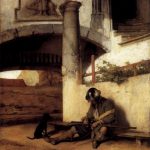