Information from the webcite of the city of Leeuwarden

Bakker has done research into the position of 17th-century painters primarily active in Leeuwarden, the cultural centre of the province. He investigated their background, but also the ways in which they sold their paintings. He places Frisian painters within the context of the broader Dutch cultural history.
The research on the basis of which Bakker wrote Gezicht op Leeuwarden was commissioned by the Fries Museum in Leeuwarden.

Gezicht op Leeuwarden was Bakker’s dissertation which he succesfully defende to obtain his PhD. In 2008 Wbooks published the commercial version of the book: De Friese schilderkunst in de Gouden Eeuw.

The Wopke Eekhoffprize is awarded once every four years to the best contribution to local historical research in Leeuwarden. 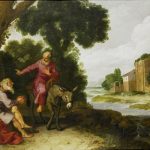