In the State archives in Belgium in Brussels a document has been discovered signed by Peter Paul Rubens and Pieter Brueghel the younger. They testified in an document from 1627, that deals with a large sum of money that Margriet Ykens owed the painter David Ryckaert. She and her late husband, still life painter Osias Beerts had borrowed that money to set up her shop. The document also lists some of the couple’s furniture and paintings, that were sold to pay off the debt, including names of buyers.

The document is part of the archives of the Council of Brabant, one of the most important courts of law in the (Southern) Netherlands. The state archives are currently in the process of making an inventory of this area of their holdings. 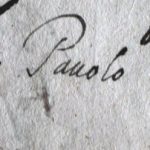 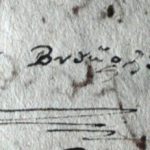