Jessica Buskirk,
“Hugo van der Goes’s Adoration of the Shepherds: Between Ascetic Idealism and Urban Networks in Late Medieval Flanders”
Although Hugo van der Goes withdrew to a Devotio Moderna-associated monastery at the end of his life, this article questions whether Devotio Moderna texts are the right lens through which to view Hugo’s Berlin Nativity, proposing instead to examine the painting side-by-side with texts produced in Bruges for the urban lay community to which most of Hugo’s patrons belonged.

Anne Dubois,
“The Donne Hours: a codicological puzzle ”
A codicological, stylistic, and technical study of the Donne Hours (Louvain-la-Neuve, Archives de l’Université, Ms A2), formerly known as the Louthe Hours, produced by Simon Marmion and the Master of the Dresden Prayerbook around 1580.

D. C. Meijer Jr., trans. Tom van der Molen,
“The Amsterdam Civic Guard Portraits within and outside the New Rijksmuseum, Pt. III: Bartholomeus van der Helst,”
In vol. 5:1 (2013), Tom van der Molen translated the first two installments of the five-part article by D.C.Meijer, Jr. published in Oud Holland (1885-1889). This is the third of the installments, on Bartholomeus van der Helst, a “critical” article that provides a record of late nineteenth-century ideas about civic guard portraits around the time of the opening of the new Rijksmuseum.

The next formal deadline for submission of articles is August 1, 2014 (for publication in 2015 or 2016), although authors are encouraged to submit at any time. 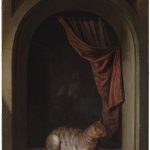