On 5 January 2009 a small group of curators and other art historians had the privilege to view and compare two views of Amsterdam from the Amstel by Jacob van Ruisdael. One of the paintings, from the collection of the Fitzwilliam Museum in Cambridge, is presently on view in the exhibition Pride of place: Dutch cityscapes of the Golden Age in the Mauritshuis in The Hague (until 11 January). The other was recently acquired by the Amsterdam Historical Museum in Amsterdam and brought to the Mauritshuis for the comparison. The proximity of both paintings to each other presented a unique opportunity to compare the two late works by the famous Dutch landscape painter.

The group of about 25 participants in the session were struck by the differences between both paintings even more then their obvious similarities. Although the paintings show the same viewpoint, probably based on the same drawn sketch showing the actual situation (now in the Museum der Bildenden Künste in Leipzig), the optical angle differs significantly. The placement of buildings, trees and even riverbanks differs in both works as well, indicating that Ruisdael took liberties in the placement of such objects.

The differences in style between the two works inspired a lively debate as to which preceded the other. One hypothesis is that the Amsterdam painting predated the more sketchy Cambridge version. The sharper and clearer Amsterdam painting would be more in line with other works by Ruisdael from an earlier period.

Opposing this stylistic argument is the thesis that since in the Amsterdam painting Ruisdael took greater liberties with the actual topography (and thus departed further from the drawn sketch ) this painting would be the later of the two.

Parallels were drawn between the famous city views of Haarlem or “Haarlempjes” and these two paintings, which were accordingly baptized “Amsterdampjes.” The theory was put forward that since the Haarlem city views were very popular, Ruisdael would have tried to extend the demand for such pictures to cityscapes of Amsterdam. 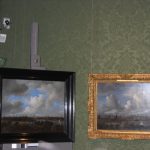 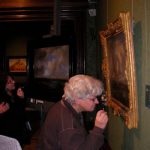 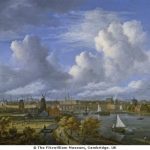 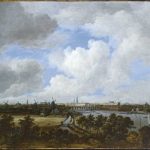