After almost 400 years Pieter Jansz Saenredam’s church interior The North Aisle and Radiating Chapel of the Sint Janskerk in Utrecht (1655) is returning to Utrecht. The painting was recently discovered at an auction in London. Following conservation, extensive research has shown that the painting is by the Haarlem-based painter Pieter Jansz Saenredam (1597-1665). This remarkable panel is on display at the Centraal Museum for three months from 28 June.

This temporary display is a unique opportunity to see the recently discovered work in the city where it was made. It is very likely that the painting will disappear abroad.

It was long assumed that this painting must exist because of a preparatory study in the collection of the Utrecht Archives. Art dealer Jan Six saw the painting at an auction in London and immediately believed it to be authentic. Following stylistic and technical research there is now no doubt that it was painted by Pieter Jansz Saenredam. Jan Six of Jan Six Fine Art: "This previously unknown work meets all the demands of a masterpiece: it is in fantastic condition, it has an intriguing use of perspective and the painter has used an intense yet subtle colour palette. The work shows that Saenredam has a unique place in seventeenth-century art. You could say that he was one of the most ‘modern’ artists of his age."

Liesbeth M. Helmus, curator of Old Masters at the Centraal Museum: "A discovery such as this is extremely rare. The painting is signed, dated and was made in Utrecht. It is the missing link in his oeuvre, and it is a beautiful painting." The work can be admired for three months in Utrecht from 28 June together with Saenredam’s work The Chapel of St Anthony in the Sint Janskerk in Utrecht (1645) from the collection of the Centraal Museum. The museum also has an interior of the Mariakerk in Utrecht by Saenredam. The Centraal Museum has organised two major retrospective exhibitions of work by the seventeenth-century architecture painter, one in 1961 and another in 2000.

It is highly likely that after these three months the painting will be purchased by a foreign museum or will disappear again for a long time into a private collection. The work was bought at auction by Hazlitt, Gooden & Fox, dealers in London and New York, in partnership with Jan Six Fine Art. Shortly thereafter it was sold to a private family foundation.

Pieter Jansz Saenredam was born in Assendelft but was active for most of his career in Haarlem. From 1628 he devoted himself primarily to painting church interiors and exteriors. He was the first Dutch painter to specialize in the depiction of existing buildings. His paintings have a serene sense of peace and an extraordinary illusion of depth, space and light. Saenredam’s interiors and exteriors are extremely accurate and therefore have great historic and documentary value. 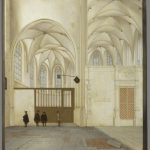