Adriaan E. Waiboer graduated from the Rijksuniversiteit Leiden in 1997 and subsequently completed a Masters degree at the Courtauld Institute of Art, London, where his thesis Equality, ordering & rigidity: the hierarchy of the genres in Dutch seventeenth-century art theory was awarded a distinction. At the Institute of Fine Arts, New York University, Waiboer received a Masters degree in 1998 and a Ph.D. in 2004, having successfully defended his dissertation Gabriel Metsu (1629-1667): life and work. During his doctoral research, he received a number of fellowships, among them a Theodore Rousseau Fellowship from The Metropolitan Museum of Art, New York, an American Friends of the Mauritshuis Fellowship, and a Mary Davis Fellowship from the Center for Advanced Study in the Visual Arts, National Gallery of Art, Washington. 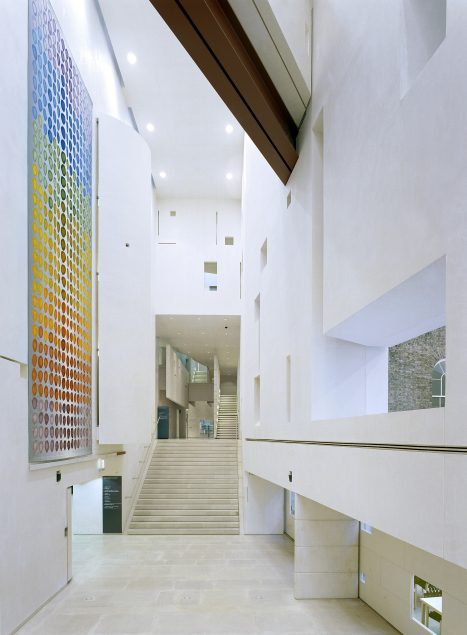 The Millenium wing of the National Gallery of Ireland in Dublin

When I joined the National Gallery of Ireland (NGI) in Dublin in 2004, I did not know its collection of Dutch and Flemish art very well. Of course, I was aware that some of the most iconic works, such as Johannes Vermeer’s A woman writing a letter and Rembrandt’s Rest on the flight into Egypt, are preserved in Dublin, but I was positively surprised about the number and diversity of the Dutch and Flemish paintings owned by the NGI. The majority of the works were acquired in the late 19th century, when early directors purchased large numbers of paintings in London for still reasonable prices. Although various later gifts and bequests filled important gaps, the late 19th-century character of the collection is still recognizable today. Paintings by a number of Dutch and Flemish artists who were favored less at the time than they are today are lacking, such as the Leiden “fine” painters Gerrit Dou and Frans van Mieris. In 1987, the National Gallery of Ireland was fortunate to be the recipient of the cream of Sir Alfred Beit and Lady Beit’s collection. The generous donation included seventeen works that immediately belonged to the Gallery’s favorites, including the Vermeer, Jacob van Ruisdael’s Castle at Bentheim and Gabriel Metsu’s A man writing a letter and A woman reading a letter. 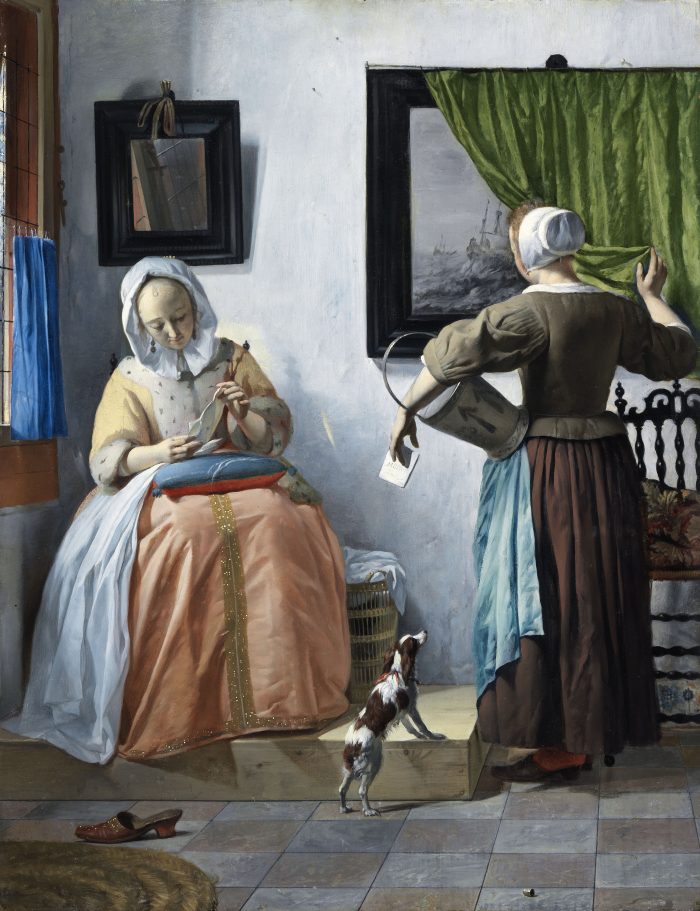 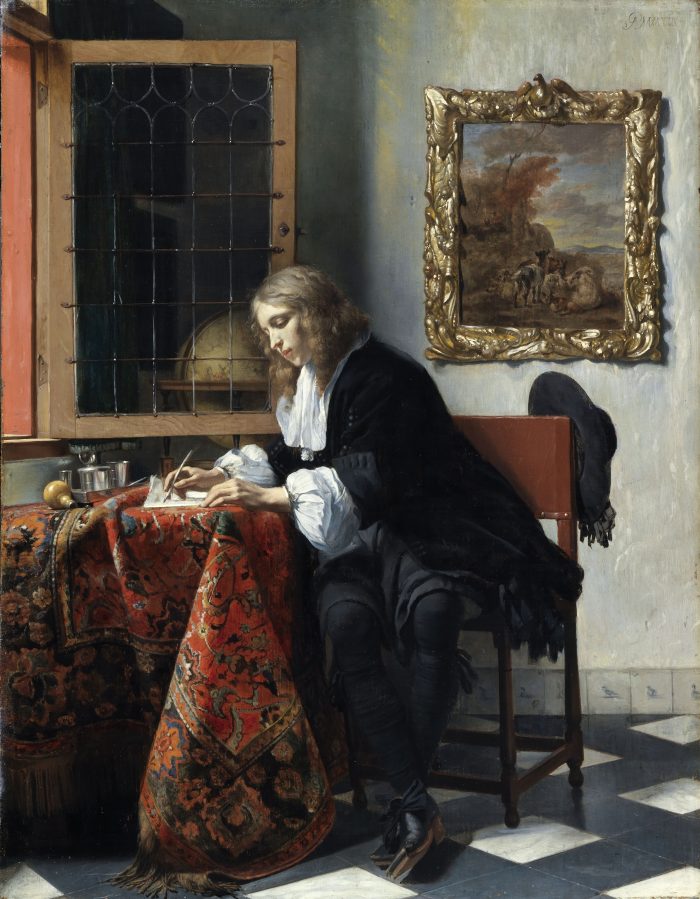 In 2004, when I became a curator at the NGI, I was still working on my Ph.D. dissertation on Metsu. Joining the institution that owned the pendants A man writing a letter and A woman reading a letter, which are probably the artist’s most famous works, was a dream come true. The idea to organize an exhibition on Metsu was there from the start, but I first concentrated on other projects, if only because I needed to finish my dissertation first. In hindsight, I think the presence of Metsu’s paintings nearby and my wish to organize a show on Metsu definitely served as an incentive for me to complete my dissertation, which I did in 2007. Since then, I have converted my dissertation (with catalogue raisonné) into a manuscript, which will hopefully be published soon. The material covered in this monograph also served as the basis of the current exhibition on Metsu.

A man writing a letter and A woman reading a letter are absolutely spellbinding, and I am fortunate to have the opportunity to see them every day if I want. When I look at the works, I am often reminded by the fact that Metsu died only two to three years after painting them. He passed away at the age of thirty-seven, when he was one of Holland’s leading genre painters. Imagine how many great works he could have painted, had he lived just a few years longer. 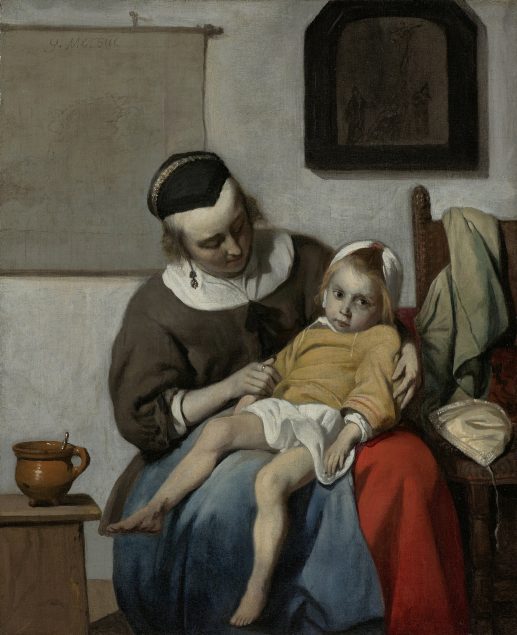 What fascinates me about Metsu’s companion pieces are the thoughts that went around in the artist’s head in the process of painting them and the decisions he made that led him to paint the works in this way. One thing is sure: Metsu had a strong admiration for Gerard ter Borch and he often tried to improve on Ter Borch’s works by painting similar subjects in a more engaging way. Ter Borch’s paintings of love letters, and particularly his companion pieces An officer writing a letter and A lady sealing a letter, certainly served as the starting point for Metsu’s paintings.

The style and the setting of Metsu’s pendants, however, strongly echo Vermeer’s works. Look, for example, at the natural daylight illuminating the shallow room and reflecting off the back wall, the geometric distribution of large forms, and the emphasis on objects hanging on the back wall. The paintings even include areas in which Metsu imitated Vermeer’s painting technique. The most extraordinary one in this respect is the lady’s jacket, which Metsu painted with significantly little gradation in tonal values, which gives the effect of abstraction. Shortly before, Vermeer had started employing a similar technique. But, as Melanie Gifford, conservation scientist at the National Gallery of Art in Washington, explained to me, Vermeer’s use of this “schematic” technique was not as pronounced as it is in the case in Metsu’s painting. He only started painting in this manner after Metsu’s death in 1667. This encouraged me to compare Metsu’s yellow jacket with those appearing in Vermeer’s works. It is astonishing to see how the technique in Metsu’s painting, completed in 1664–66, comes closest to Vermeer’s Guitar player in Kenwood House, which dates from 1670–72. So it seems Vermeer also had a good look at Metsu’s works. That in itself is not surprising. The Delft painter once in a while adopted subjects or motifs from Metsu and I surmise that A man writing a letter may have stimulated his colleague to paint single male figures in the same setting he had previously used for women — the result being The astronomer (1668) and The geographer (1669). Anyway, I find it fascinating how genre painters at the time interacted with each other, and Metsu’s wonderful pendants exemplify what these interactions led to.