Prints and drawings study room in the British Museum

Being a curator at the British Museum

Since March this year I have been the curator of Dutch and Flemish drawings and prints at the British Museum in London. I was born in Antwerp, the hometown of great Flemish masters such as Rubens, Van Dyck, Jordaens, Teniers and the Bruegel dynasty. I grew up surrounded by the impressive Baroque art in Antwerp, with its many churches, historic houses and museum exhibitions reflecting the city’s distinguished past. Subsequently, I studied Ancient History, Archaeology and Art History at the universities of Leuven (Belgium), Trier (Germany) and Lille (France). While working on my Master’s degree in Museum Studies at University College London I interned as a curatorial assistant at the British Museum and a year later was appointed cataloguer of Dutch and Flemish prints in the Department of prints and drawings. In the space of three years I created more than 15,000 exhaustive database records on prints dating from the sixteenth to the eighteenth century. 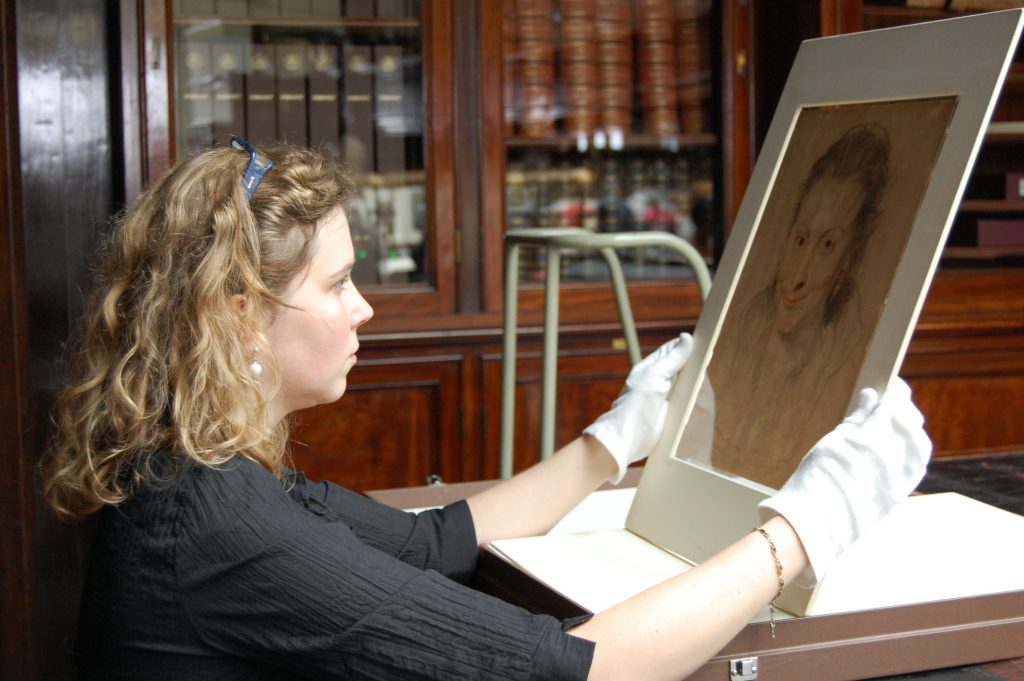 An Van Camp studying the Portrait of Isabella Brant by Rubens

In my current position I am responsible for almost 5000 drawings and 50,000 prints dating from the fifteenth century to 1880, all from the region roughly comprising the modern countries of Belgium and The Netherlands. My curatorial remit includes etchings and drawings by Rembrandt, Anthony van Dyck’s Italian sketchbook, Peter Paul Rubens’ costume book, etchings by Hercules Seghers and important groups of drawings by Lucas van Leyden, Frans Snyders and Adriaen van Ostade, to name just a few. All of the Early Netherlandish, Flemish, Dutch and Belgian drawings have been catalogued in the database, along with most of the prints. The remaining nineteenth-century Dutch and Belgian prints are being catalogued by interns. Other print series, such as the portrait prints and some topographical views, are still waiting to be catalogued in off-site storage.

The Department of prints and drawings contains the national collection of Western prints and drawings, counting approximately 50,000 drawings and over two million prints dating from the beginning of the fifteenth century to the present. The department’s seven curators are in charge of prints and/or drawings from a specific European region, allowing them to focus on their area of specialisation. The study room is open to the public and visitors from all over the world come in daily to study our vast collection. This allows me to meet and exchange ideas with people who share my interest in Dutch and Flemish art. I also enjoy Wednesdays at the museum, when visitors can have their works of art examined and identified by the staff. 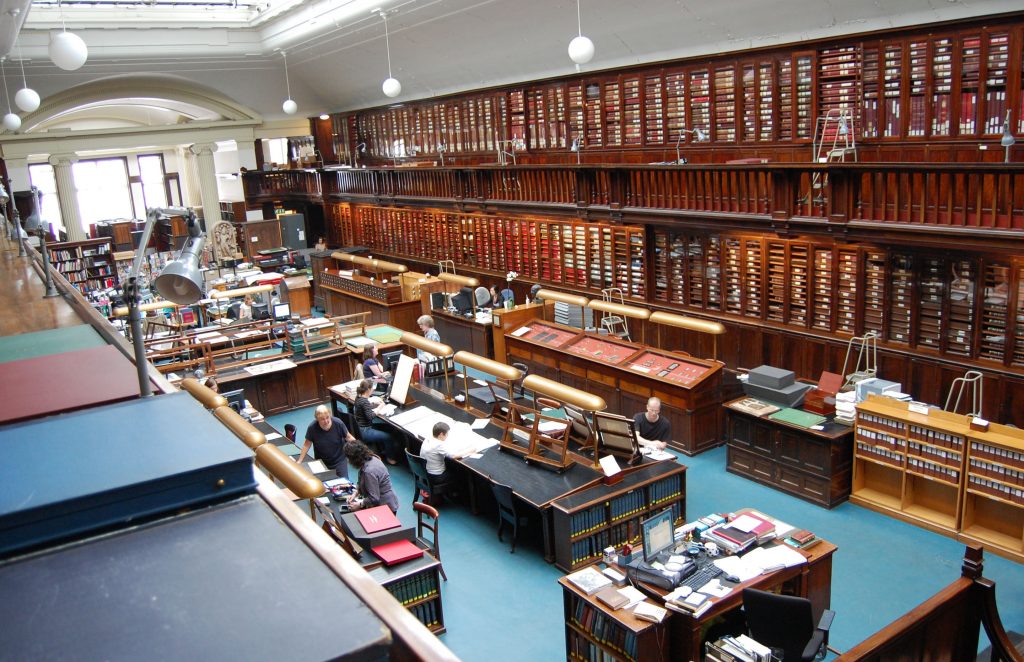 Prints and drawings study room in the British Museum

I am charged with the physical care of the Dutch and Flemish drawings and prints: ensuring that they are securely stored; checking their condition and arranging conservation treatment if needed; and facilitating loan requests and courier loans to other institutions in order to guarantee the objects’ safety. My day-to-day tasks involve answering enquiries and following up research requests, either from other curators working on exhibitions or from researchers, students or interested members of the public. Most of my time, however, is spent researching our amazing Dutch and Flemish collection and entering relevant information and bibliographical references on the museum’s database. The records of this internal database are updated weekly to the museum’s website, where researchers and other members of the public can look them up and also download digital images.

I am currently organising a small exhibition, to open in late August 2010, on the differences in style and function of preparatory drawings (studies for prints and paintings) made by Adriaen van Ostade and David Teniers the Younger, in celebration of the 400th anniversary of their birth in 1610. Besides mounting special displays of Dutch and Flemish art, I also assist exhibition curators in other departments select and research objects in our department to be included in interdepartmental or travelling exhibitions. 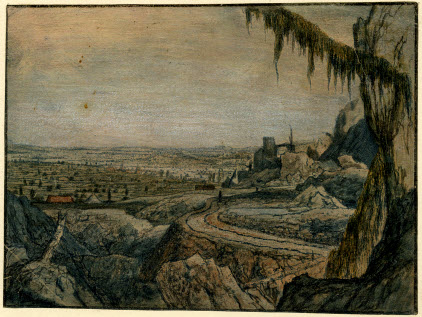 My favourite works of art in the collection

Since becoming curator of the Dutch and Flemish drawings and prints, I have been able to study some of my favourite works of art in greater depth. One of the artists I particularly admire is the Dutchman Hercules Seghers, known for his colourful etchings created with experimental techniques and methods. Most of his prints are of desolate, rocky landscapes, which he individually hand-coloured so that each impression looks unique and expresses its own atmosphere. The British Museum holds three impressions in two states of Distant view with branch of a pine tree (Haverkamp Begemann 27). All three are printed in various shades of ink and on differently coloured sheets of paper, as well as being painted over in different colours. The one shown here is printed in blue ink on pinkish-prepared paper and was subsequently finished with white body colour in the sky, and tints of blue, green and reddish-brown throughout the composition. The atmosphere in this print is strongly reminiscent of a landscape glowing at dusk, just before sunset. For me, Seghers’ experimental printmaking techniques and use of colour lend his works a modern feel, giving rise to a certain marvellous timelessness. 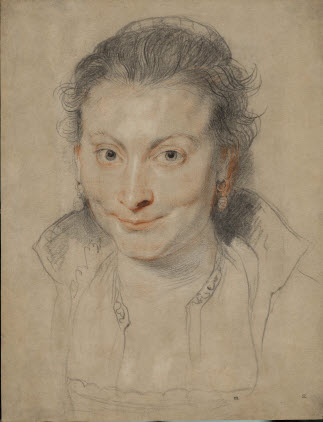 The first drawing in the museum’s collection to catch my eye was Rubens’ famous portrait of his first wife Isabella Brant. In this wonderful chalk drawing Rubens affectionately portrays his wife as a vivacious and affable woman with a slightly mischievous smile. Every time I look at it closely I feel as though I am intruding on an intimate moment in the couple’s married life. In 1964 another sketch was discovered on the reverse of this sheet when it was lifted from its old mount. On the verso Rubens drew himself with his second wife Helena Fourment and one of his children. Rubens probably added this family portrait less than ten years after the first drawing was made, suggesting that he held on to this portrait for a long time, perhaps in memory of his deceased wife. This single sheet affords genuine insight into the artist’s personal life and it is in part these intimate glimpses that make my job as a curator so fulfilling and exciting.