My interest in curatorial work began in part in the offices of the Los Angeles County Museum of Art, as I looked through the object file for Gerrit van Honthorst’s 1617 painting The Mocking of Christ. The year was 2011, and my graduate seminar’s assignment was to select a Dutch painting in LACMA’s collection and write a paper on its technical and material qualities. At the time, I couldn’t see myself in academia and I wasn’t entirely sure what path my career would take. I was excited for the seminar assignment because I knew that I loved museums, which I had visited with my mother growing up. My first opportunity to glimpse behind the scenes at a major art museum, and gain a sense of what curatorial work looked like, stuck with me for years to come. As my curatorial perspective developed in graduate school, I increasingly realized that I wanted to work in museums, and bring new approaches that would challenge dominant narratives of European art history. 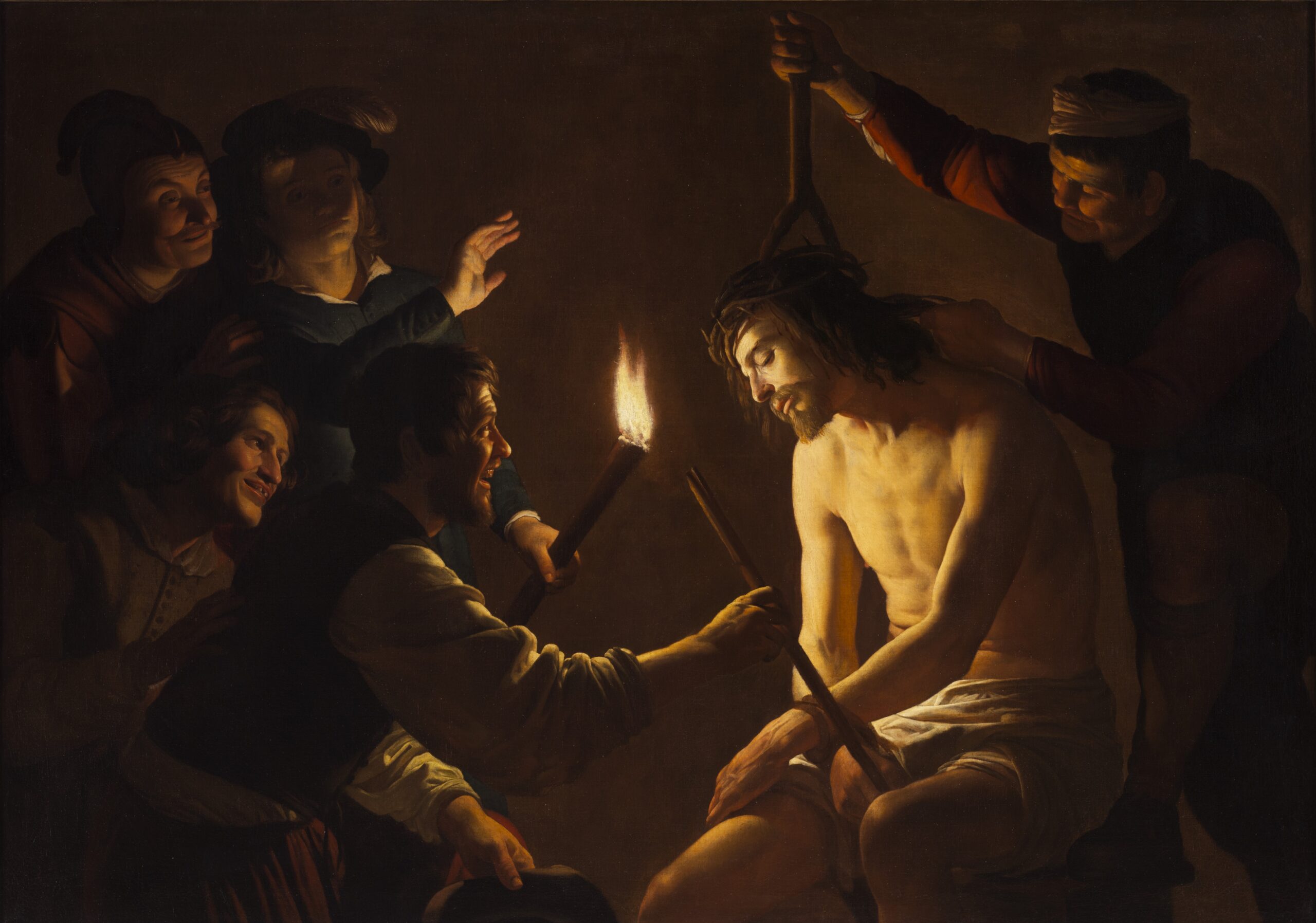 Evolving from that 2011 paper, I developed my dissertation project, which charted how seventeenth-century Dutch Catholics deployed art to renew their sense of collective identity and define a distinct devotional practice in the face of the public prohibition of their faith. The Mocking of Christ served as my entryway to Dutch Catholic art, as it struck me immediately as an unusually quiet depiction of what is typically a violent and dramatic scene. In Honthorst’s painting, the figure of Christ sits in a meditative state, head bowed, against a shallow black background. As my research developed, I came to understand that Honthorst’s approach was defined by themes key to the revitalization of his Dutch Catholic community, including intimate devotion and the resigned endurance of suffering. This led me to thinking about the art histories of communities facing persecution and why the art historical canon excludes so many of these types of stories.

While writing my dissertation, teaching at UC Santa Barbara, and working full-time as a Curatorial Assistant at the Santa Barbara Museum of Art, I co-curated the 2017 Getty Pacific Standard Time’s LA/LA exhibition Sacred Art in the Age of Contact: Chumash and Latin American Traditions in Santa Barbara with my colleague Maggie Bell (Assistant Curator, Norton Simon Museum). The exhibition explored the persistence of Chumash artistic traditions through the Mission period in Santa Barbara County, c. 1769–1833. Maggie and I spent three years working closely with advisory committees of Chumash and indigenous peoples, as well as staff at the two museums that hosted the exhibition simultaneously. This experience solidified my love of the implicitly collaborative, interpersonal nature of curatorial work, which allowed the project to be multivocal and decenter curatorial authority.

In 2018, I completed my Ph.D. and started at LACMA as the Wallis Annenberg Curatorial Fellow, initially sitting at the very same desk where I had consulted the Honthorst object file back in 2011. As a Curatorial Fellow, I immersed myself in the collection of LACMA’s European Painting and Sculpture Department. The Department includes 100 works of Dutch and Flemish painting and sculpture dating from the late fifteenth to seventeenth centuries, largely built around the collecting interests of Edward and Hannah Carter, and expanded through the support of The Ahmanson Foundation. Both the Ahmanson gifts and Carter collection have recently been published in detail in online publications with scholarly entries and conservation reports (See the Carter collection catalogue here and Volume 3 of the Ahmanson collection catalogue, with the Dutch and Flemish works, here). Gifted in 2003 and 2009, the Mr. and Mrs. Edward Carter collection of Dutch painting consists of thirty-seven significant landscapes and still life paintings and makes up the core of LACMA’s seventeenth-century Dutch painting collection. While the paintings comprise a few select genres, the collection offers exceptionally varied and historically insightful treatments of their themes, from Gerrit Berckheyde’s view of Amsterdam’s newly-constructed city hall across the Nieuwezijds Voorburgwal c. 1675, to the meticulously-painted conus marmoreus shell resting on the windowsill of Ambrosius Bosschaert’s 1619 Bouquet of Flowers on a Ledge. 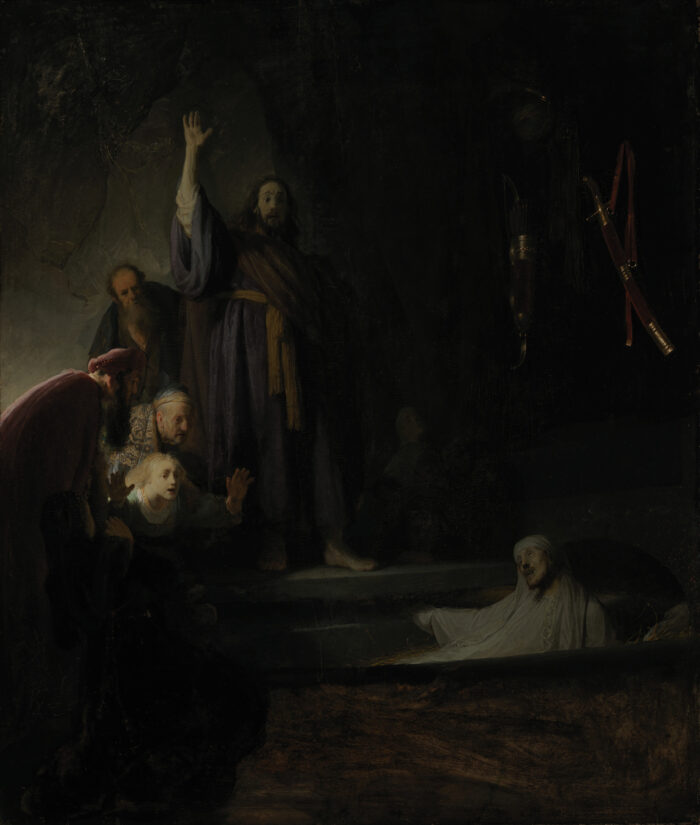 This collection has been broadened in scope, subject, and chronology by major gifts of art made through The Ahmanson Foundation, beginning with Rembrandt’s c. 1630-1632 The Raising of Lazarus in 1972, a hallmark of the collection. Among my favorite Ahmanson gifts are Carel Fabritius’s c. 1645-1647 Mercury, Argus, and Io, Frans Hals’s c. 1635-1638 Portrait of Pieter Dircksz. Tjarck, and of course, the aforementioned Honthorst, The Mocking of Christ. Beyond these foundational collections, other favorite works of mine from the collection include Salomon de Bray’s 1652 Martyrdom of Saint Lawrence, Jan Mandijn’s Boschian c. 1550 Saint Christopher and the Christ Child, and the arresting early sixteenth-century Flemish Reliquary Bust, gifted early in the museum’s history as part of the William Randolph Hearst Collection.

Following my appointment to the position of Assistant Curator in February 2020, I began to explore questions around how the Department of European Painting and Sculpture’s holdings could be situated in the rich, multimedia world of early modern visual culture represented in LACMA’s collection. What was the original context in which our seventeenth-century Dutch paintings were viewed and understood? What kinds of non-European objects were brought to Europe and collected alongside them? What was the relationship between how Europeans valued non-European objects and how they understood the people who made them? What were the cultural consequences of the exportation and valuation of these non-European objects? Starting from these inquiries, I began to develop an exhibition that assembles a fictive seventeenth-century Dutch collector’s cabinet, drawing from the permanent collection of LACMA, along with a group of select loans including natural specimens, scientific instruments, and rare books. The exhibition explores these questions, critically reconsidering how in the collector’s cabinet, Dutch collectors ordered the world, asserting judgments on the value of natural materials, forms of labor, methods of craftsmanship, and people.

The exhibition will bring together highlights from across curatorial departments in new juxtapositions and groupings (including works from Art of the Middle East, Chinese Art, Costume and Textiles, Decorative Arts and Design, Egyptian Art, Japanese Art, Prints and Drawings, and South and Southeast Asian Art). Accordingly, the research for this project has entailed exciting exchanges with many of my colleagues at the museum, learning from their expertise and exploring new questions about objects from their departments. It is my hope to offer a critical rethinking of early modern European collecting practices that has particular implications for LACMA, as the exhibition reflects on the colonial and global histories of the encyclopedic museum.

Working on this exhibition has informed my approach to the reinstallation of LACMA’s collection in the galleries of our new building dedicated to the permanent collection, which will open in 2024. This is a once-in-a-career opportunity for our entire curatorial team (not just European art) to wholly rethink our permanent collection installation, and it is a privilege to have such brilliant colleagues with whom to collaborate on this project. In a number of working groups, I have been thinking (and rethinking) through questions and connections related to nineteenth-century revival styles, the Atlantic slave trade, and exchange in the Mediterannean world, among other topics. Particularly in the difficult past year, it has been wonderful to make time and space to forge new visions of LACMA’s future together, and activate the potential for the reinstallation to visualize global interconnectedness, decenter Europe, and uncover colonial histories. 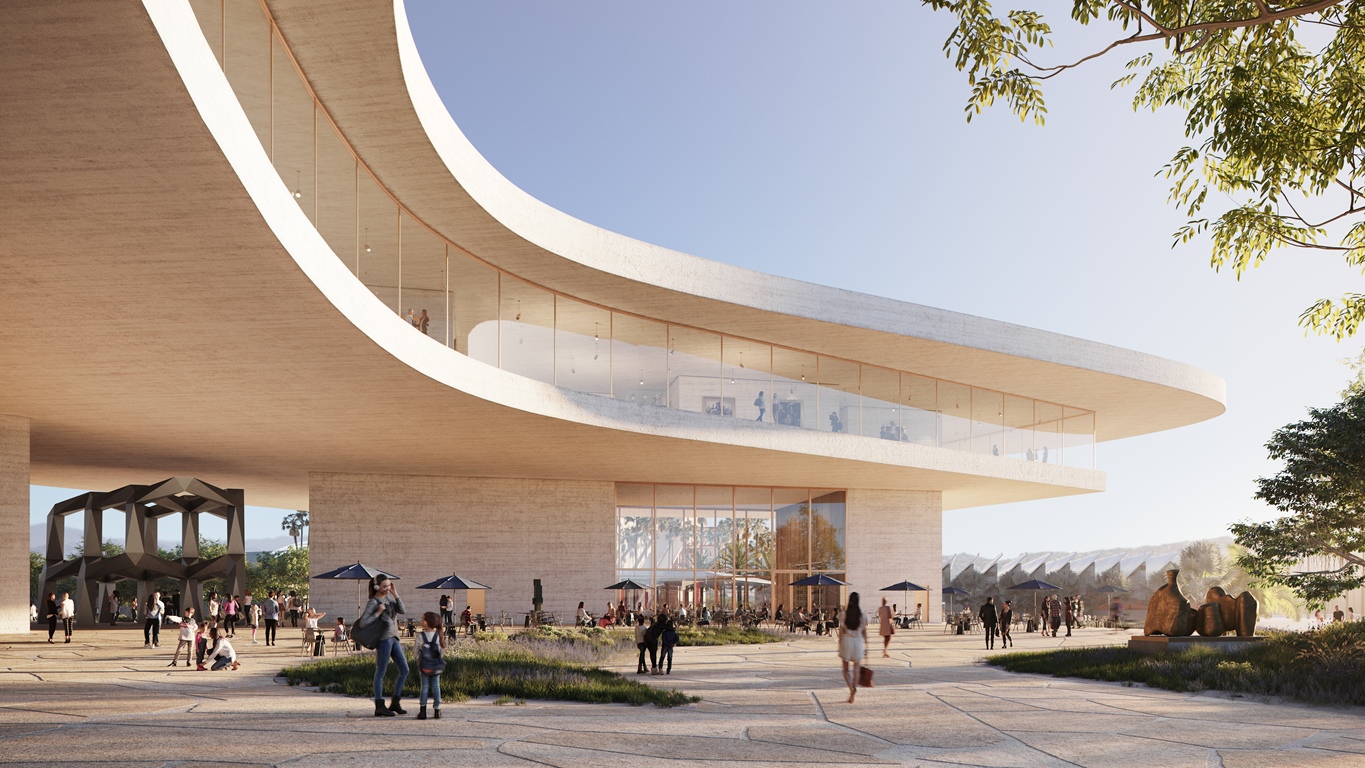 Working to uphold the values of diversity, equity, and inclusion is an essential part of my job as Assistant Curator at LACMA, not only in my curatorial practice, but in pursuing change across the field. Museums must systematically confront and dismantle the models of white supremacy implicit in their histories and present in their workplaces. So much remains to be done in progressing towards this goal, but I am encouraged by the impressive cohort of colleagues who are committed to continuing this work. In summer 2020, I was invited to participate in the Steering Committee for the group Inclusivity in Dutch and Flemish Art (IDFA), which consists of about forty North American curators. In an ongoing series of virtual meetings, we’ve addressed topics such as gatekeeping in the field, institutional transparency, and collaborating with community advisory groups. These dynamic conversations have not only helped to shape my curatorial approach, but have provided a much-needed occasion to personally connect with so many fantastic colleagues in my field. In the future, I hope to build on the conversations and networks that have formed in the past year to develop new initiatives, programs, and professional practices. At LACMA, I am excited to be on the brink of a new beginning with my curatorial colleagues, as we critically rethink not only how we present our permanent collections, but how we can best reflect and serve the communities of Los Angeles County.

Diva Zumaya is Assitant Curator at the Los Angeles County Museum of Art (LACMA). She has been a member of CODART since 2019.