I began working at the Royal Castle in Warsaw when I was still a student. My first position was as an assistant to the curator of the furniture collection. Then I switched my focus to paintings: I completed my M.A. with a thesis entitled Architectural fantasy paintings in 18th-century Venice and Bologna, under Professor Jan Białostocki at the University of Warsaw. I was therefore delighted to have the opportunity to work first as a keeper and then a curator of paintings after my graduation. 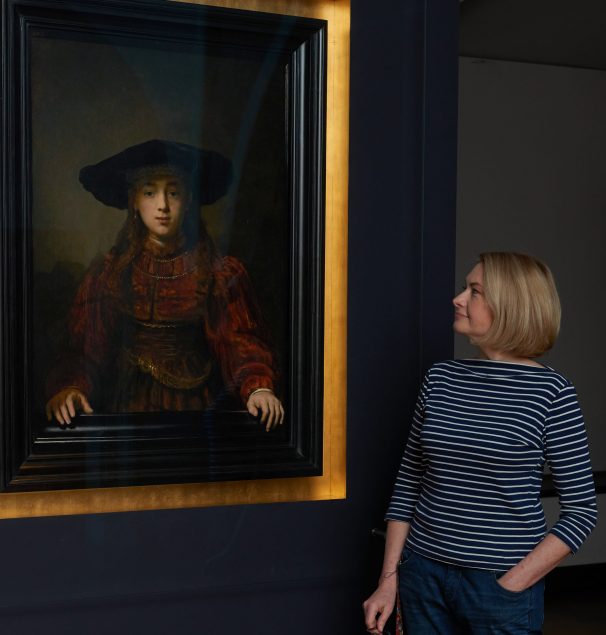 The Royal Castle, the historic residence of Polish Kings and seat of the Sejm (parliament), was destroyed during the Second World War. The decision to reconstruct it was taken in 1974, by the then Polish People’s Republic, and in 1983 the castle was opened to the public as a museum. My early days of working at the castle were taken up with furnishing and arranging the newly-reconstructed interiors and compiling the documentation relating to the expanding collections. At the time, the painting collection consisted only of series originating from the castle’s state apartments: a series of historical paintings and portraits by Marcello Bacciarelli and several views of Warsaw by Bernardo Bellotto. These had been evacuated when much of the castle was destroyed by fire in 1939 and they long remained in storage in the National Museum in Warsaw. They had all been commissioned by the last Polish king, Stanisław August Poniatowski (reigned 1764-1795) who had completely refurbished the castle’s state apartments in neoclassical style in the 1770s and 1780s.

Dutch and Flemish paintings were at the heart of Stanisław August’s collection, constituting the majority of his Old Master collection. While the king’s collection was formed along the lines of prevailing trends and tastes, it also reflected his personal taste. In a passage of his memoirs describing his journey to the Netherlands as a young man, he wrote ‘The sight of paintings by Rubens and Van Dyck gave me a sense of elation’.  Dutch paintings were generally purchased at auctions,  including such prestigious ones as the Amsterdam sale of the Gerrit Braamcamp collection in 1771 and the Johan Aegidius van der Marck sale in 1773. 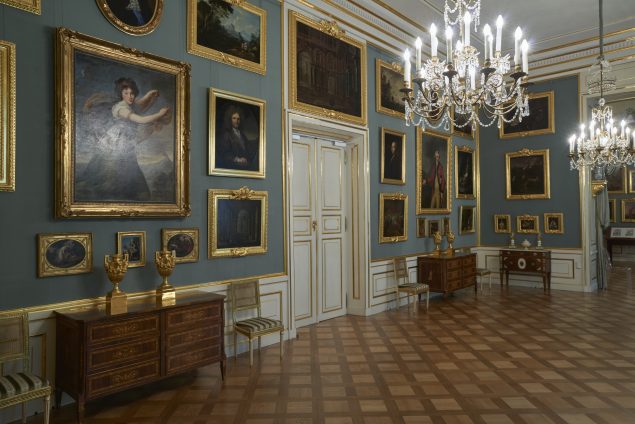 The king’s collection of Dutch masters consisted mainly of small cabinet paintings: they included Jan Steen’s Choice between Youth and Wealth, Gerard ter Borch’s Officer writing a letter (both of which now hang in the National Museum in Warsaw), Gabriel Metsu’s Washerwoman (Royal Łazienki Museum), and decorative Italianate landscapes. But the king also owned three Rembrandts:  Girl in a Picture Frame and A Scholar at His Desk (Royal Castle in Warsaw) and The Polish Rider (Frick Collection), the biblical paintings by Jan Victors (Royal Łazienki Museum and the National Museum in Warsaw), and a number of interesting portraits, including the self-portrait of Arend de Gelder (Hermitage, St. Petersburg) and the beautiful Portrait of a 38-Year-Old Widow by Pieter Soutman (Royal Łazienki Museum).

In 1798 Stanisław August’s heirs sold almost his entire collection of paintings at the castle, sparing only the series of paintings mentioned above, which were part of the permanent decoration. To fill the blank walls in the rooms of the newly-reconstructed castle, we were obliged to virtually reconstruct the collection from scratch. This was not an easy task given the political and economic situation of the day: the Polish art market was virtually nonexistent before 1989. For the young people on the castle’s staff (most of us had only recently graduated) it was a significant and interesting challenge, besides which it provided an opportunity to start on our own independent research. Most of the furniture, decorative arts and paintings that had been purchased or given to the castle as gifts had never been published; we needed to conduct research and to make attributions. My mentor in the field of painting was an eminent specialist, Dr. Bożena Steinborn, who was then chief curator of the Art Department. 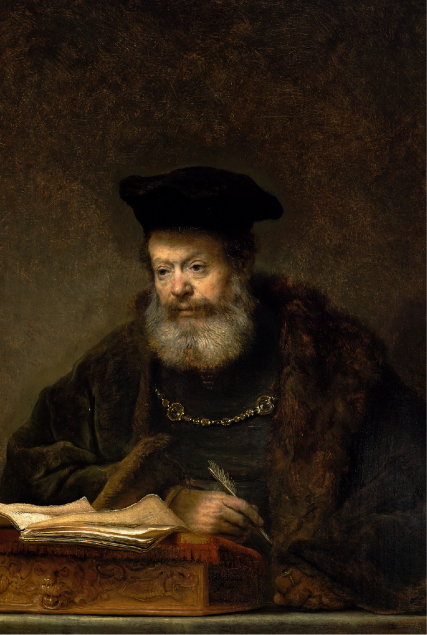 In 1989 the situation changed dramatically: almost overnight we had access to the Western art market and it became easier to contact our colleagues in Western Europe. In 1992 I had the great pleasure of serving as co-curator of the Polish venue for the exhibition Collection for A King: Old Master Paintings from the Dulwich Picture Gallery curated by the late Giles Waterfield, and in 1996 I acted as the Polish curator of the exhibition From Brueghel to Rubens, organized by the Koninklijk Museum voor Schone Kunsten in Antwerp and curated by Yolande Morel-Deckers and Julian Vervaet. Both exhibitions were very popular and attracted large crowds.

In 2007 the first scholarly catalogue of the Royal Castle in Warsaw’s painting collection was published. I wrote the catalogue in collaboration with Hanna Małachowicz (now retired), with whom I worked in tandem for many years, co-authoring many articles and essays. The English version was published in 2013 (The Royal Castle in Warsaw: A Complete Catalogue of Paintings, c.1520 – c.1900, Warsaw 2013), which includes 512 paintings. 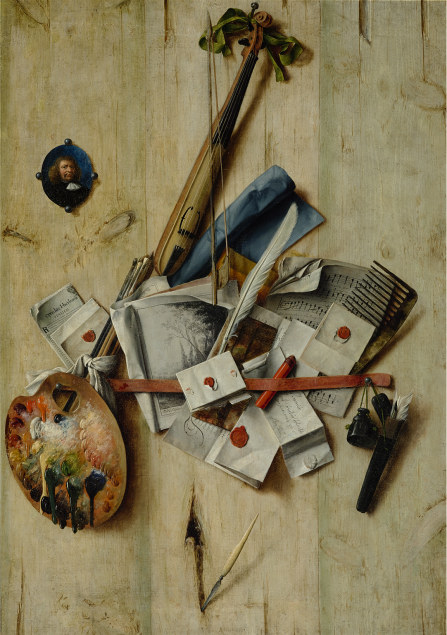 The present Royal Castle’s collection of paintings is not a typical ‘museum of fine arts’ collection. Since the castle is primarily a historic royal residence, the paintings were bought chiefly to decorate its interiors: hence the relatively large number of portraits of historical figures and eighteenth-century pictures.  Our collection of seventeenth-century Dutch and Flemish paintings is relatively small, although we do have several interesting examples. The highlights of our collection are the two Rembrandts, which were donated to the Royal Castle in 1994 by Karolina Lanckorońska. They were sold by the king’s heir – his niece Maria Teresa Tyszkiewicz – to Kazimierz Rzewuski, Karolina Lanckorońska’s great-great-grandfather. The paintings were examined by Professor Ernst van de Wetering, who accepted them as autograph works by Rembrandt and included them in the last volume of A Corpus of Rembrandt Paintings. Meeting Ernst van de Wetering, who visited Warsaw twice, and being given the opportunity to observe him at work, was one of the most exciting experiences of my professional career.

The archival research I conducted together with Hanna Małachowicz on the provenance of the Rembrandt paintings (we established that they had been purchased from the Kamecke collection in Berlin in 1777) was the starting point of our research on the paintings from the former gallery of Stanisław August. We performed extensive archival research on the paintings from the king’s collection that now belong to the Royal Castle in Warsaw, and later also on the paintings that are now owned by The Royal Łazienki Museum. The scholarly catalogue of the Łazienki collection, including an extensive introductory essay on the history of the Łazienki gallery – also co-authored with Hanna Małachowicz – was published in 2015, followed by an English edition in 2016 (The Stanisław August Collection of Paintings at the Royal Łazienki: Catalogue, Warsaw 2016). 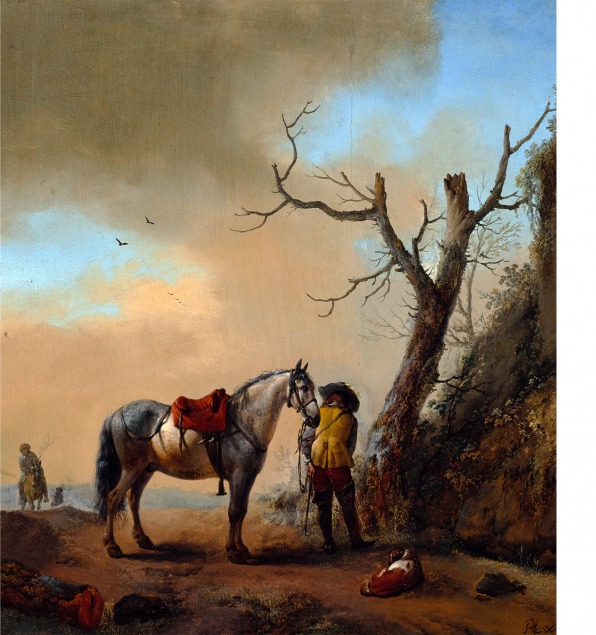 Philips Wouwerman, Landscape with a White Horse and Dismounted Rider, 1647-1648

I am currently working in partnership with the Royal Łazienki Museum to prepare a catalogue of all the paintings that belonged to the king’s former gallery and that were sold after the king’s death by his heirs. My aim is to track down as many as possible of them. At present we know the whereabouts of approximately 400 paintings from the collection – which contained 2,500 works in 1795. They are now in museums in Poland and elsewhere –in locations including St. Petersburg, Amsterdam, and New York. I would be extremely grateful for any information my colleagues at CODART may have concerning the whereabouts of any paintings which have a Stanislavian (or even merely Polish) provenance, such as those by Radziwiłł, Tarnowski, Mniszech, or Ossoliński (djuszczak@zamek-krolewski.pl). 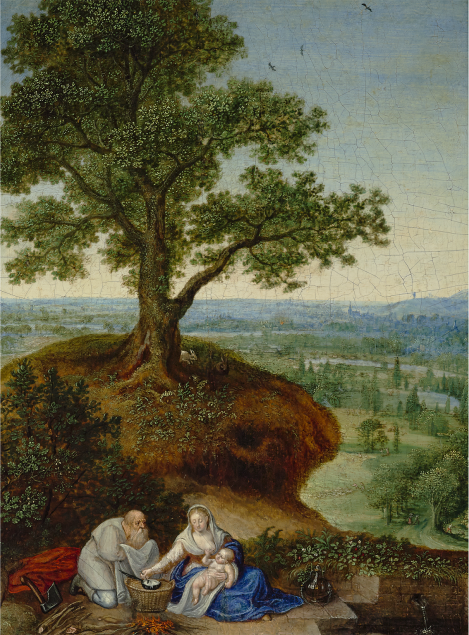 Lucas van Valckenborch I, Landscape with the Flight into Egypt, 1590

An important part of my job, which is no less interesting than the scholarly research on the paintings, relates to the arrangement of paintings and the furnishing of the Castle’s historical interiors. For some of the rooms – especially those that did not serve a ceremonial purpose, whose walls were once covered with pictures – we unfortunately have to work without any iconographic documentation; nor do we have the paintings that once hung in them. We are compelled to rely on inventories, archival materials, drawings and designs dating from the period in question. This year we completely reinstalled the pictorial decorations in the King’s Apartment at the Royal Castle: we hung a number of some paintings that have enriched our collections over the past decade. Precisely how Stanisław August’s collection of paintings was organized, and how the works were displayed and distributed among the royal residences and individual interiors, is an interesting issue that requires research. My most recent article was devoted to the arrangement of the paintings in the Galerie en bas at the Łazienki Palace, where the gems of the king’s collection were on display. This was where the two Rembrandts, which are now the property of the Royal Castle, hung during the reign of Stanisław August.  They are now on display in the Gallery of Paintings, Sculpture and the Decorative Arts that we created on the ground floor of the Royal Castle in 2011. We believed that the most interesting paintings in our collection should be exhibited separately, and not as part of the interiors, where they were sometimes hung high up and were consequently rather inaccessible. Among the pictures on display in the new gallery are several Dutch and Flemish works, including paintings by Philips Wouwerman, Ludolf Backhuyzen, Abraham van Beyeren, Cornelis Decker, David Teniers II, Cornelius Norbertus Gysbrechts, Carstiaan Luyckx, Cornelis Schooten, Adriaen van Ostade, and Peter van Lint. My favorite is the beautiful little Landscape with the Flight into Egypt by Lucas van Valckenborch I, which exemplifies the delicate and sophisticated coloring, subtle treatment, and precise rendering of detail that are so typical of this artist. When gazing at this picture, I can forget that I am a researcher and have the pure joy of discovering new and stunning elements such as the red strawberries set among blades of grass, Joseph’s gestures as he leans over the infant Jesus, the shimmering light reflected in a glass bottle, and the silhouette of a windmill on the horizon.