Maryan Ainsworth is Curator of Northern Renaissance paintings in the European Paintings Department at The Metropolitan Museum of Art (MMA) and Adjunct Professor of the History of Art at Barnard College. In her over forty-year career, she has specialized in Technical Art History and has trained over twenty-five MMA Fellows in this methodology.

When I entered Oberlin College as a freshman, I thought I would be majoring in French language and literature, while taking advantage of the internationally renowned Oberlin Conservatory to continue my study of flute. All that changed when I discovered the riches of the Allen Memorial Art Museum and the curriculum of the History of Art Department. In addition to this, there was a conservation studio attached to the museum where students could visit and learn about paintings restoration. The physical proximity of the museum and the classroom meant that students had daily contact with art objects. Our professors taught from the collection, and early on, I became convinced that first-hand study of the object is the foundation of art history. I knew then that I wanted to become a museum curator. This was confirmed when I continued for my Ph.D. at Yale University, where there was another great art history faculty, including Egbert Haverkamp-Begemann, who became my dissertation advisor, and where the History of Art Department was again physically linked to a great museum, the Yale University Art Gallery (YUAG). I majored in Northern Renaissance Art and had a student internship at the YUAG.  It was there that I did my first international loan exhibition entitled Dante Gabriel Rossetti and the Double Work of Art, concerning the symbiotic relationship between Rossetti’s poetry and his art works. I was hooked! During that period, I pinpointed my dream job – curator of the Northern Renaissance Paintings Collection at the Metropolitan Museum of Art.  It only took me another twenty-five years to get there by a most circuitous route where serendipity would play a major role. 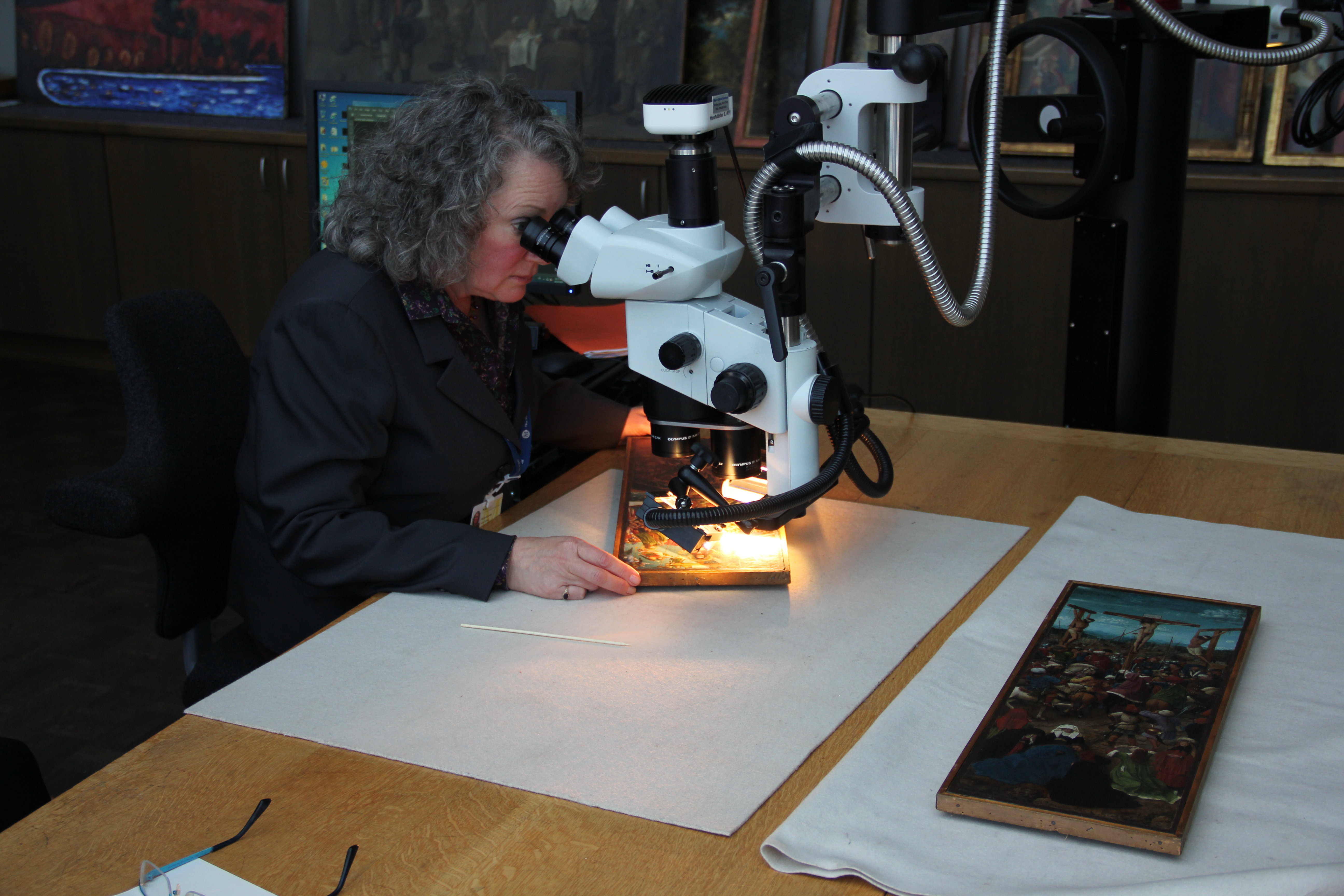 My dissertation was on “Bernard van Orley as a Designer of Tapestry” and I carried out my research on the topic in Brussels with a grant from the Belgian American Educational Foundation.  I spent hours at KIK/IRPA in the Centre des Primitifs Flamands and at the Musées Royaux des Beaux-Arts with its extraordinary collections of Early Netherlandish Painting. Upon my return to New York from Brussels, Professor Begemann proposed that I take on a three-year temporary position as Principal Investigator of a project to study The Metropolitan Museum’s Rembrandt paintings, using a technique called neutron activation autoradiography. This interdisciplinary project united the fields of art history, conservation, and scientific investigation, represented by Begemann, John Brealey, and Pieter Meyers. It was here that I was first introduced to what we today call Technical Art History. When this project was completed, John Brealey invited me to join the Paintings Conservation Department as the art historian there and to continue technical investigation on works in my period of interest, the Northern Renaissance. Using the Met’s painting collection as my starting point, and embarking on a study of the underdrawings in these paintings with infrared reflectography, I also traveled with the museum’s equipment to many museums nationally and internationally to seek out comparative material. This was the moment when I started to teach about connoisseurship and technical art history through hiring a graduate student intern each year (known as the Slifka Fellowship at the Met) and through a yearly fall course I taught at Barnard College and Columbia University. There are now twenty-five “graduates” from the internship program – an international group who are prominently placed in leading university posts and curatorial positions in the U.S. and Europe. A number of them teach Technical Art History.

During this time, I studied closely the works of Petrus Christus, Hans Memling, Gerard David, Joos van Cleve, and Bernard van Orley.  I mounted an international loan show on Christus (1994), and wrote a book on Gerard David (1998).  David was also a featured artist in our exhibition From Van Eyck to Bruegel (1998) that brought together all of the Early Netherlandish Paintings at the Met from its various collections. A few years later, I finally moved over to the European Paintings Department as the Curator in charge of the Early Netherlandish, French, and German paintings, where I have been ever since. Although I took a most circuitous route getting to my dream job, I do not regret a moment of the delay. What I learned en route to the position has been extraordinarily helpful to everything I do as a curator. I still approach the collection – its preservation, study, and presentation through publications, exhibitions, and teaching – in an interdisciplinary manner, through Technical Art History. 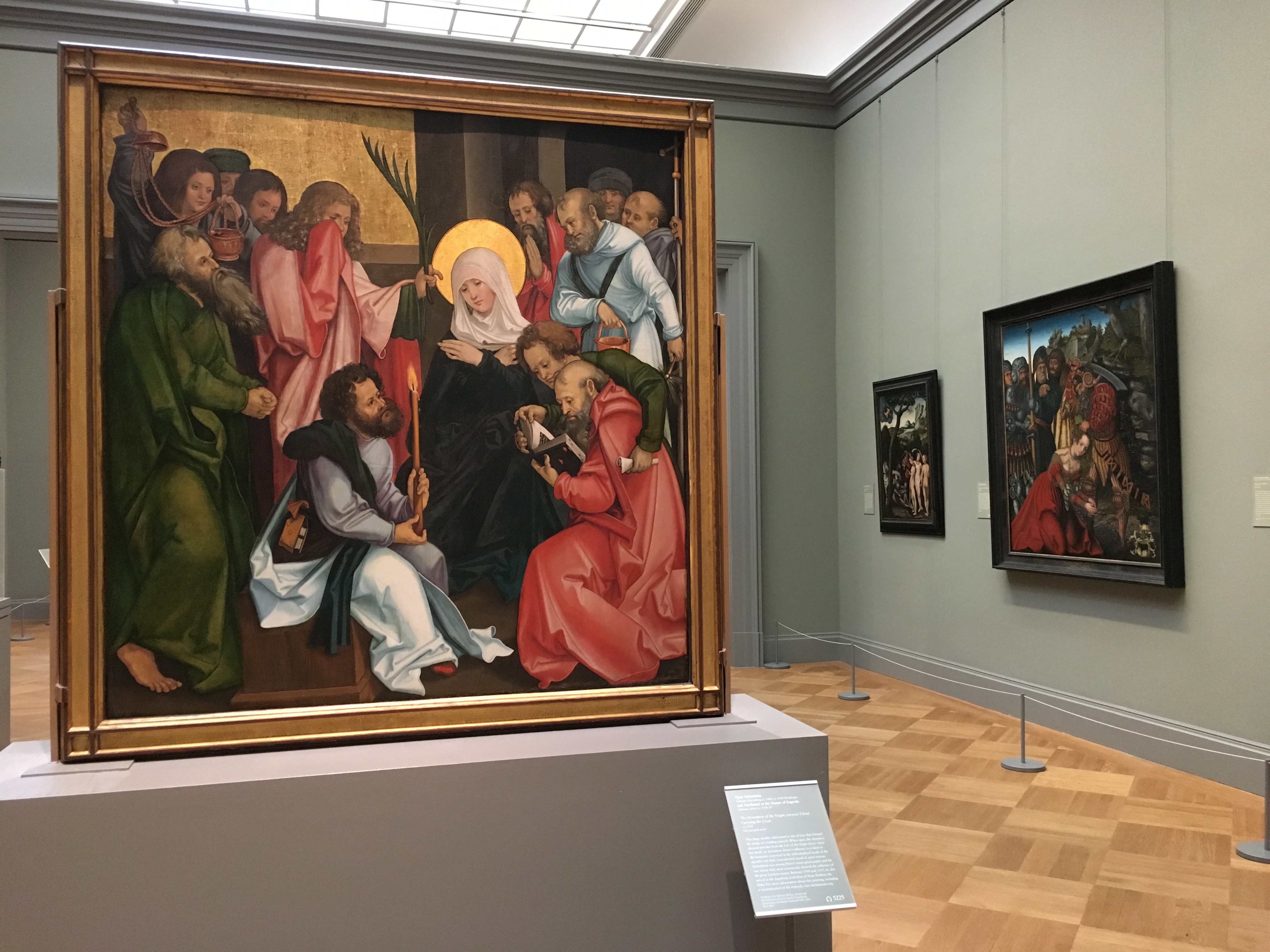 Gallery with Hans Schaufelein’s The Dormition of the Virgin of ca. 1510

The Met’s Northern Renaissance Paintings collection is the largest of its kind in the United States. There are about 140 Early Netherlandish paintings, 70 Early German paintings, and a smaller group of French paintings. The main collection resides in the European Paintings Department, mostly the result of generous donors. The Cloisters/Medieval Department houses certain works – among them the famous Merode Triptych – that were purchased through their own endowment funds. The Linsky and Lehman collections are housed in named galleries as a result of the stipulations of their bequests. It is through the catalogues of these collections as a whole that one gets an idea of the totality of the holdings. I catalogued and published the Early German paintings in collaboration with Joshua Waterman in 2013. When completed, the individual entries, complete with references, provenance, and technical examination notes, went online on the Met’s website. The Netherlandish paintings were discussed in the 1998 exhibition catalogue From Van Eyck to Bruegel, but these entries did not include nor integrate the technical notes to the paintings. I have now returned to cataloguing this material, in collaboration with paintings conservator Sophie Scully, but not as a book. Instead, these entries appear online as soon as they are completed. The advantages of such online entries include easy updating with references and new material at any moment; the Met’s images and technical material presented in high resolution, zoomable images; and inclusion of as many comparative images as necessary. That is, it is a highly flexible form by which to present the material. However, the visitor to the website does not get any sense of the complexity and comprehensive nature of this collection.  Therefore, simultaneously, I am writing a book on the collection devoted to themes, such as artists’ workshop procedures, the development of landscape painting, portraiture, etc. Each chapter of the book can be illustrated entirely by works in the Met’s own collections, and this means that visitors can return time and again, and study the works first-hand that are featured in this tome on the history of Netherlandish painting. 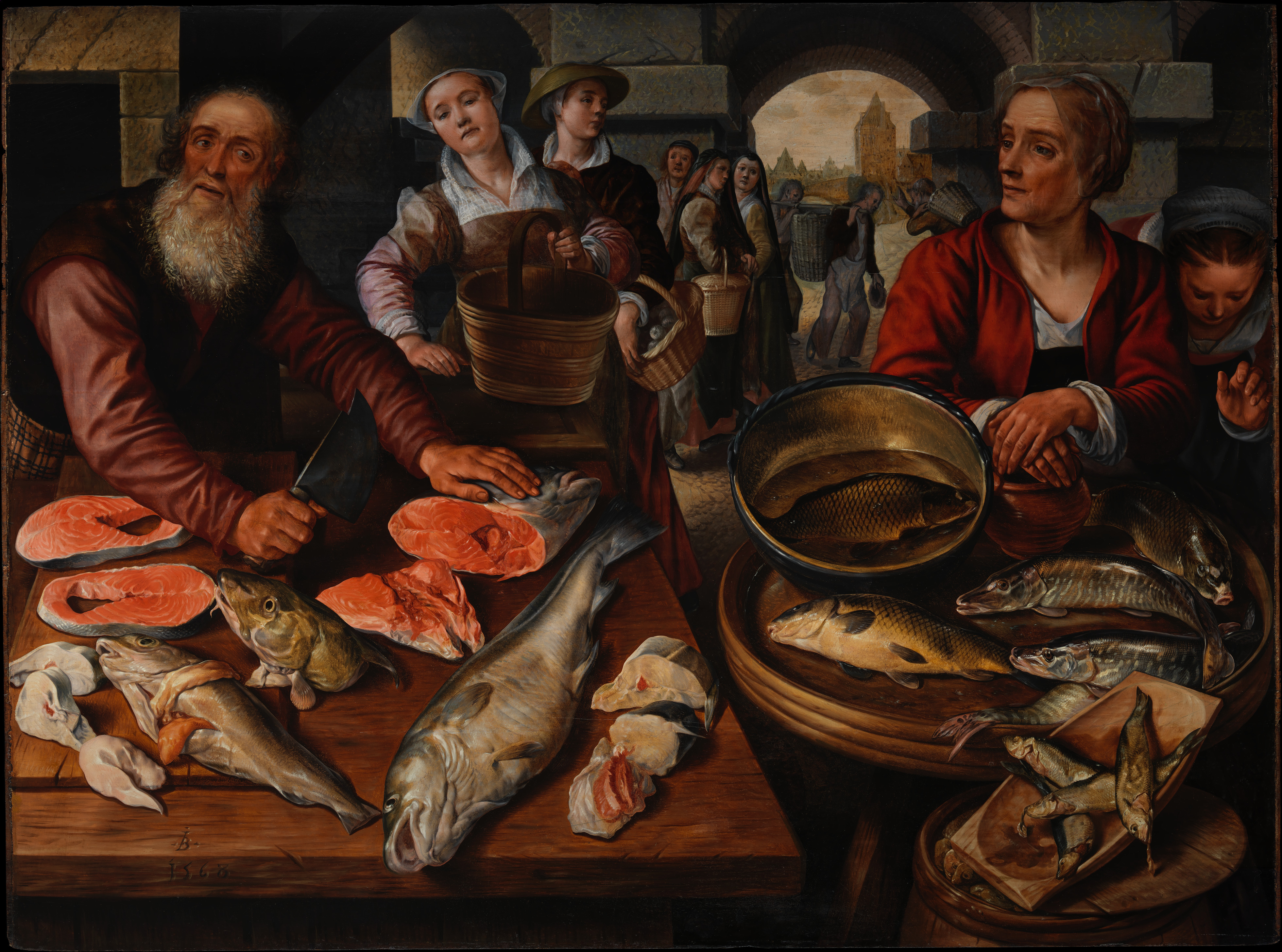 With such a comprehensive collection of northern European 15th – 16th century paintings, it can be a challenge to expand the collection. Yet, there ARE gaps. In recent years, we have been able to fill a major lacuna – sixteenth century still life painting – with a great Beuckelaer, the monogrammed and dated 1568 Fish Market. At other times, opportunities come along that can’t be ignored. Thus we acquired a rare Portrait of an Old Man, now attributed to Hugo van der Goes, and an exceptionally poignant Christ Carrying the Cross by Jan Gossart. Gerard David’s Christ Blessing, which exemplifies the artist’s close connection with manuscript illumination, was purchased jointly by the Cloisters and the European Paintings Department. Promised gifts from generous donors have allowed us to join two early pendants by Bernard van Orley, the Birth and Naming of Saint John the Baptist and the Beheading of Saint John the Baptist. I have augmented our collection of German Renaissance paintings with a splendid Hans Schäufelein double-sided panel of the Dormition of the Virgin and Christ Carrying the Cross, showing the strong influence of Albrecht Dürer, and a gift, Saint Maurice by Lucas Cranach and workshop.

Our collections often serve as the starting point for exhibitions small and large. Focus shows on Albrecht Dürer’s Salvator Mundi, Lucas Cranach the Elder’s Saint Maurice, or the original frames of Jan van Eyck’s Crucifixion and Last Judgment have been truly pleasurable experiences. The monographic exhibitions I have carried out with collaborators, such as those on Petrus Christus, Gerard David, Jan Gossart, Pieter Coecke van Aelst, to name a few have been the result of close technical examinations that led us to new conclusions about the artistic contributions of these artists in their own time. In every case, I have benefitted from my early interdisciplinary route that afforded close collaboration with paintings conservators.

Collaboration with other departments at the Met as well as with other museums internationally has always been a goal of mine. We achieve far more when we join together in projects than when we stand alone, as our CODART meetings and resulting collaborations have so readily demonstrated. Some of the greatest pleasure I derive from being an art historian and curator has been serving on consulting committees convened to advise on exhibitions being planned or on the cleaning and restoration of important paintings. Certainly, my most extraordinary experience has been the opportunity to serve on the “experts committee” for the cleaning and restoration of the Ghent Altarpiece by Hubert and Jan van Eyck. Without a doubt, studying such a monument in the history of art with painting conservators and art historians is a most humbling experience, especially when so many new discoveries are made at every stage of the restoration. I realize that with this particular encounter I have come full circle to my initial training in art history. The object itself always takes center stage and the interdisciplinary study of the work, with specialists in conservation and conservation science, as well as other disciplines, has never ceased to amaze and enlighten me.

In a long career, I have received a number of awards for books and exhibition catalogues and was granted the College Art Association – National Institute for Conservation Award for Distinction in Scholarship and Conservation. King Albert II of Belgium honored me with the Knight of the Order of the Crown and the Knight of the Order of Léopold for contributions to the study of Belgian National Patrimony. Recent accolades related to teaching and scholarship – the Robert Janson-La Palme Visiting Professorship at Princeton University (2017), and the Kress-Beinecke Professor at the Center for Advanced Study in the Visual Arts at the National Gallery of Art in Washington, D.C. (2018-19) – are particularly gratifying. They recognize the gifts that we CODART members as art historians and curators can pass on to the next generation of professionals through our teaching and mentoring.

Maryan W. Ainsworth is Curator of European Paintings at the Metropolitan Museum of Art in New York. She has been a member of CODART since 1998.