Since 1997 Norbert Middelkoop has been curator of paintings, prints and drawings at the Amsterdams Historisch Museum (AHM). He is on the board of the Stichting Cultuur Inventarisatie and member of the editorial committee of the Amstelodamum Society Monthly and Yearbook. Norbert joins CODART from its founding in 1998, the last few years as chairman of the program committee.

Working at the Amsterdams Historisch Museum for more than 12 years, his job as curator means most of all studying and presenting one of the most interesting collections of Dutch paintings, including over 50 civic guard group portraits (schuttersstukken) and as many governors group portraits (regentenstukken), not to mention the individual and family portraits, a decent number of anatomy lessons as well as cityscapes, among other things. In his writings he likes to underline the context in which these paintings were collected, since what many of them have in common is their provenance and the way they ended up in the city’s art collection.

Beside studying the painting collection, Norbert co-curated shows of AHM drawings and prints for venues in Australia, Japan and “at home”. He has also contributed regularly to exhibition catalogues of fellow institutions. In his future scientific work, Norbert keeps his focus firmly on the history of Amsterdam’s Old Masters collection, preparing his Ph.D. thesis on this topic. Inside the AHM he is involved in a major reshuffling of the galleries and storages, due to take place over the next years.

Norbert Middelkoop on the AHM collection

The Amsterdams Historisch Museum, a happy marriage between art and history, offers splendid opportunities to submerge oneself into the city’s rich artistic heritage. Before the building complex was converted into a museum between 1960 and 1975, it housed the city’s orphanage for four centuries. Visitors can already sense the history of the place by simply sitting down in one of the courtyards or by entering the original Governors’ room. In the spectacular Civic Guard gallery, the world’s first public museum street, visitors are gazed at by dozens of Amsterdammers from the “Golden” 17th century. Lured into touring the different AHM galleries, each visitor will experience how the story of Amsterdam is presented by first-class artworks.

In July 2008 the museum’s new paintings catalogue was published: De Oude Meesters van de stad Amsterdam. Schilderijen tot 1800. It contains short descriptions and black-and-white illustrations of all ca. 1000 paintings of the city before 1800, including those kept as loans in the Rijksmuseum. Around 140 of them, all masterpieces of the Amsterdams Historisch Museum, are presented in entries (in Dutch) and larger color illustrations. The complete pressrun was nearly sold-out by the time the exhibition of the same subject opened in March 2009: Old Masters of Amsterdam. Fortunately, a more modest publication accompanying that show, titled Amsterdam’s Glory, offers both Dutch and English-reading users a quick insight into the complex history of the city’s paintings collection. Furthermore, the museum’s website provides many images and descriptions of paintings predating 1800. Later in 2009, the complete holdings of the museum will become available online as well. 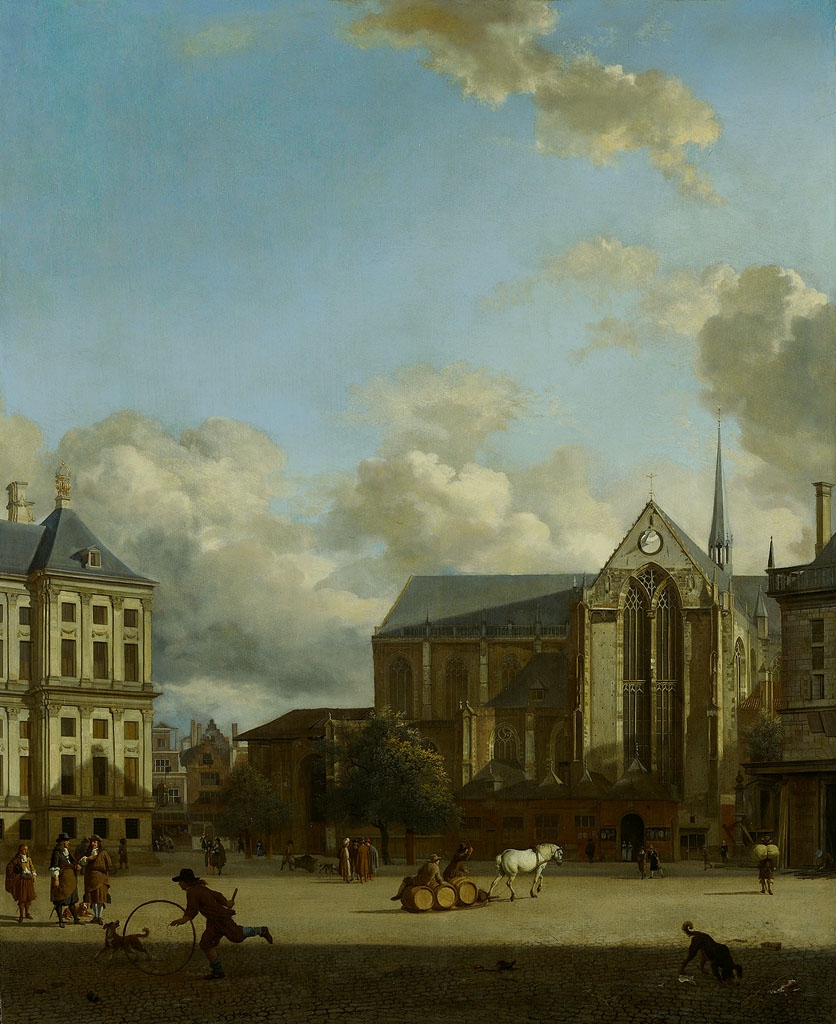 Norbert Middelkoop on selected works from the collection

Paintings
Although it is impossible to choose just one favorite work from the entire museum’s collection, I’d like to at least pick one from each of the categories I am responsible for, in order to prevent envy between our paintings, prints and drawings. The painting I want to propose is a stunning Dam Square painted around 1668 by Jan van der Heyden, the most successful portraitist of space I know. Not surprisingly the reproduction adorns the cover of our 2008 Old Masters catalogue. Allow me to cite a few lines from an entry that I wrote on the occasion of the recent exhibition on the artist:

“It is morning; the sundial on the Nieuwe Kerk points to 9:00 AM. On the left and right sides only the corners of the Town Hall and the Weigh-House are visible – just enough to situate the scene. The main motif is the Nieuwe Kerk, that has been moved firmly to the right of its actual position. This means that one can see the foot of the planned tower that was never built. Even without the incomplete tower, one can definitely state that the view of the Nieuwe Kerk is not possible from any position on Dam Square – something that makes one wonder why the artist manipulated the topography in this way. Van der Heyden drew on all his resources here to produce a polished play of light and space. The transept of the Nieuwe Kerk casts a diagonal shadow over the roof of the nave and the Weigh-house casts its triangular shadow over the ground floor of the Town Hall. The skilful positioning of the staffage, traditionally attributed to Adriaen van de Velde, adds forcefully to the sense of a vast space one gets in this scene.
One can cautiously suggest a link between the painting and the project for the church tower, for Van der Heyden painted his scene before the project was definitely cancelled. Both the Nieuwe Kerk and the striking measurements of the panel would have provided enough space to include the church tower, if a resumption of the project had given occasion for this.”

It is funny how our views on individual artworks are constantly being enriched. As a reaction to my entry, Lyckle de Vries suggested that the open space for the missing tower might have been meant simply to stress the failure of the building project. An attractive hypothesis indeed, for Van der Heyden’s presumed clients were definitely more interested in secular issues like the Town Hall project than in sky scraping church towers!

Drawings
It might come as a surprise to learn that one of the finest collections of Old Master prints and drawings in the Netherlands is kept in the Amsterdams Historisch Museum. Its cornerstone was laid with the bequest of the coal merchant Carel Joseph Fodor (1801-1860). Whereas this son of an immigrant from Hungary had mainly acquired paintings by living masters, mostly Dutch, Belgian and French, his drawings collection exhibits a more varied spectrum, including many Dutch and Flemish Old Masters as well as foreign schools. He was also keen on acquiring Dutch 18th-century watercolor copies of 17th-century paintings.To me, among the most outstanding drawings in the collection is Rubens’s Young couple, one of the four large preparatory sheets the museum owns for the Garden of Love at the Prado. The artist has sketched an elegant pair, of whom only the young man has been worked out in detail. From the girl he embraces only the silhouette is given. Still, Rubens manages to show us how these two lovers relate to each other and to the suggested space, only using black chalk, as well as some red and white. 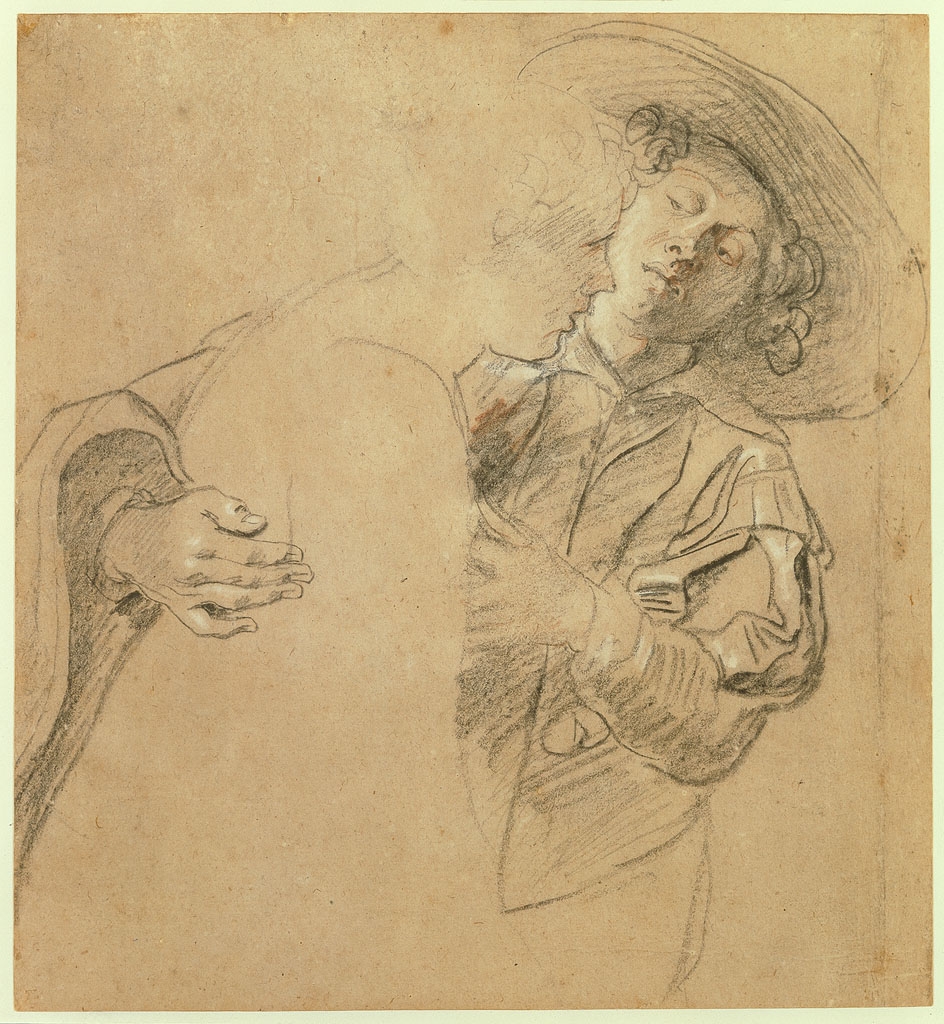 Prints
Fodor’s largely unpublished print collection of approximately 1300 works deserves much more study, not only for the large number of individual sheets but also for the thematic print series, some still kept in the original portfolios in which they were assembled. It contains, for example, the complete engravings after paintings in the collection of the Duke of Choiseul (1771) and those from Jean-Baptiste Pierre Lebrun’s Galerie des Peintres Flamands, Hollandais et Allemands (1792-96). However, my pick from the print collection is not a Fodor sheet.

A favorite print I’d like to present is a relatively modern etching and aquatint by Willem Witsen, friend of the internationally better known George Hendrik Breitner, both active in Amsterdam around the beginning of the 20th century. Whereas the latter focused on the hustle and bustle of the city, Witsen excelled in evocative cityscapes, where the human presence is subordinate to the built environment. His Beurspoortje of 1911-12 depicts a row of houses that were due to be demolished just south of Dam Square. Witsen prepared his cityscape from a barge floating in the Rokin, the stretch of Amstel River that would eventually be filled in during the 1930s. We bought the sheet a few years ago, because it is firmly linked to a painting of the same view that Witsen produced in 1913, which has been in the museum’s collection since 1960. 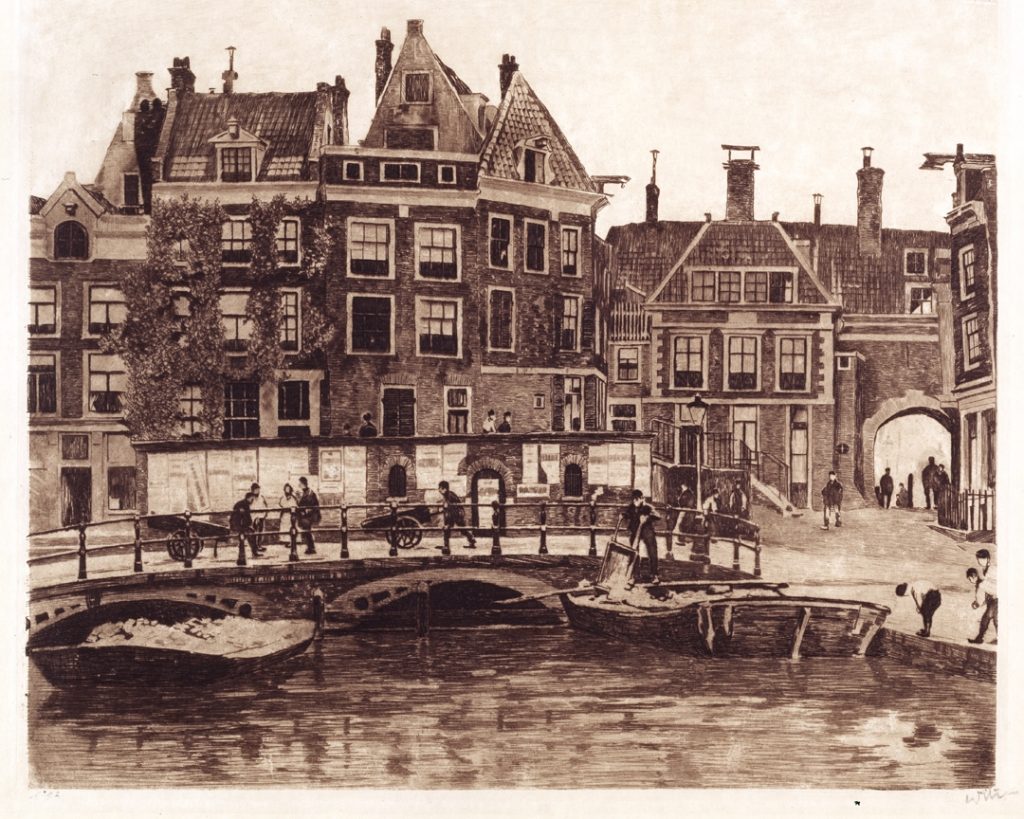