Renske Cohen Tervaert completed the Master’s program Dutch Art in a European Context at  Amsterdam University in 2008. Her MA thesis, entitled L’art pour l’argent, concentrated on the Dutch and French market for contemporary art at the end of the 19th century. This focus on the economic side of the art world grew out of her Bachelor’s degree in Visual Marketing at the Amsterdam Fashion Institute, which she received in 2004. Her MA thesis sparked her interest in conducting art historical research. In 2008 Renske received a three-month travel grant from the Prins Bernhard Cultuurfonds (Prince Bernhard Culture Foundation) to work on the exhaustive database of Dutch artists in the sales records of the French art dealer Goupil at the Getty Research Institute in Los Angeles. This database is the starting point of an extensive investigation into the international demand for contemporary Dutch art at the end of the 19th century (also known as the Second Golden Age of Dutch art). The study is being facilitated by Utrecht University, where Renske is an affiliated researcher since June 2009. After having worked in different departments of the Rijksmuseum in Amsterdam during her study, Renske was hired by the Royal Palace Amsterdam in March 2010. 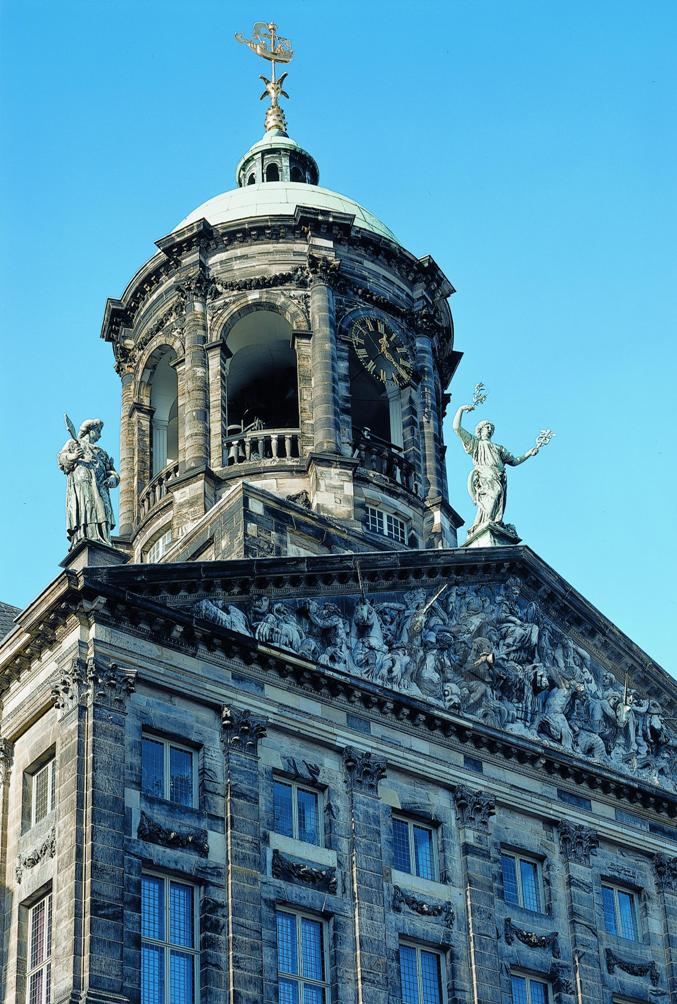 The building today known as the Royal Palace was built as the new Town Hall of Amsterdam in 1648. Designed by the Dutch architect Jacob van Campen, it had to glorify the wealth and power of Amsterdam in its Golden Age. The building functioned as a Town Hall until 1808 when Louis Napoleon, brother of the emperor and at the time King of Holland, transformed it into a palace. He turned the offices into luxurious rooms and added the balcony on the Dam Square-side of the building. After the French retreated from Holland in 1813, Prince William of Orange, later King William I, returned the building to the City of Amsterdam. The Royal House was allowed to use it and it therefore remained a palace, although strictly a ceremonial one. From the 1930s onwards the Palace on the Dam became state property.

Now the Royal Palace is used for state visits, the Queen’s New Year receptions and other official functions, including the annual presentation of the Erasmus Prize, the Silver Carnation, the Royal Awards for Painting, and the Prince Claus Prize. When the Queen or members of the Royal House are not in residence, the Palace is open to the public under the auspices of the Amsterdam Royal Palace Foundation. The Palace is open 60 per cent of the year and attracts approximately 160,000 visitors.

The Palace offers visitors a closer look into the history of the building and its occupants from the 17th century to the present day. While the building is an art object in itself, it also contains a remarkable art collection dating from the early 17th to the end of the 19th century. Preserved from the Town Hall period are paintings by major and minor Dutch and Flemish masters, including Ferdinand Bol, Govert Flinck, Jacob Jordaens, Jürgen Ovens, Nicolaes Helt Stockade, and impressive sculptures and reliefs by Artus Quellinus. The 19th-century heritage is the largest collection of Empire-style furniture outside of France, which was crafted specifically for the Palace by Dutch cabinetmakers during the reign of Louis Napoleon. The extensive royal art collection of chandeliers, porcelain and paintings complements the historic decor and is on loan from the Royal House Archive. 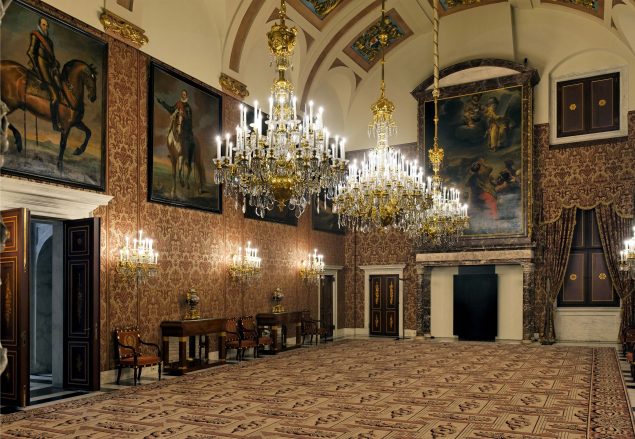 The renovation and restoration of the building’s interior from 2004 to 2009 introduced greater balance and harmony among the collections mentioned above. An example is the Magistrates’ Chamber or Throne Room, nowadays used by the royal family for ceremonies, lectures and intimate musical performances. Its original 17th-century name refers to the court of the city of Amsterdam where the sheriff and seven magistrates held office and proclaimed new laws. This former function is reflected in the paintings Moses descends from Mount Sinai with the Ten Commandments (1662) by Ferdinand Bol and Justice (1662) by Jürgen Ovens situated above the mantels, and by the coats-of-arms of the first magistrates and sheriff who presided here on the ceiling.

During Louis Napoleon’s reign the chamber was converted into the Throne Room. He used it for ceremonies and receptions, to which the Empire-style chairs, tables, cabinets and the table piano still testify. The equestrian portraits of the Princes of Orange afford insight into the family history of the House of Orange, while also giving a face to the first stadholders of the Dutch Republic. The impressive bronze chandeliers and the porcelain clock date from the reign of King William III (1817-1890) who, in contrast to Louis Napoleon, favored French manufactured objets d’arts.

While the Palace is open to the public it is not actually a museum. It nevertheless has many visitor facilities, including an audio tour, a shop, an extensive website, and guided tours for groups and schools. In addition, two exhibitions are mounted there per year. Each fall, after the Royal Awards for Painting are granted, selected participants are allowed to present their work in the Palace’s galleries. And, each summer the Royal Palace Foundation organizes an exhibition shedding light on a part of the building’s rich (art) history. In 2010 the spotlight was on the Italian architect Vincenzo Scamozzi and his architectural treatise which influenced the architect of the former Town Hall, Jacob van Campen. This year’s exhibition focuses on the series of paintings on the Batavian Revolt on view in the galleries. More information on this exhibition can be found here.

Researcher at the Royal Palace

Renske Cohen Tervaert has been working as a researcher at the Royal Palace Amsterdam since March 2010. This is a newly created position in the Exhibitions and Visitor Services Department (formerly the Educational Department), a relatively small department, with six staff members under Marianna van der Zwaag.

As researcher, Renske is charged with providing material for the subjects or themes of the summer exhibitions, researching the art historical and historical background of the Royal Palace and its collection, and conveying her findings to the public and the Palace guides. 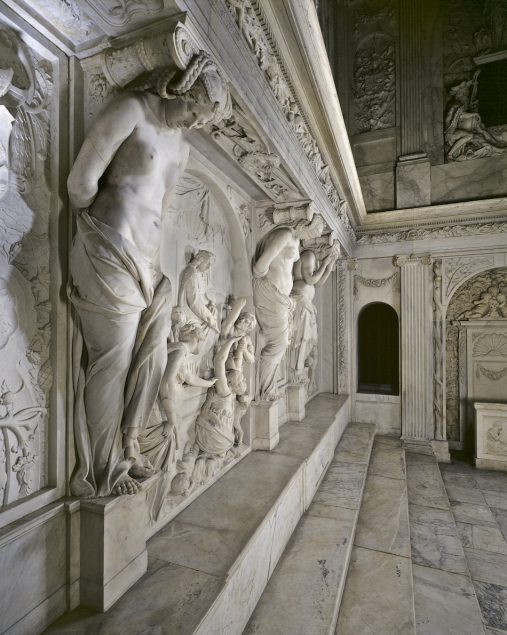 Renske has many favorite works of art, but if she has to pick one it would be the marble sculptures and reliefs by Artus Quellinus and his studio located in the Tribunal (Vierschaar) on the ground floor. This chamber is particularly beautiful and horrific at the same time: it was where death sentences were pronounced when the building was still the Town Hall of Amsterdam. People could watch the sentencing from the Dam Square through gates on one side of the open room. Inside, the magistrates were seated in front of marble caryatids. The prisoner was brought before them and faced three impressive marble ensembles set between columns. In the first relief the 7th-century BC Greek lawgiver Zaleucus is losing one of his own eyes in compassion for his adulterous son. In the second one King Solomon wisely resolves a quarrel between two mothers by ordering the executioner to divide the child they both claim as their own in two. And in the third relief the Roman consul Lucius Junius Brutus witnesses the just execution of his two sons for conspiring against Rome. These scenes are metaphors for compassion, wisdom and justice. The sculptures are impressive not only because of the life-size figures, but also their illustrative and narrative power. Even today they continue to captivate visitors – young and old, foreigner and Amsterdammer alike.

Renske also points out how many other fascinating objects and details can be found in the architecture and decorative program. Every part of the Palace and its collection belongs to a different period of the Netherlands’ exceptional history and tells a different story. This magnificent edifice always finds a way of taking a leading role in the writing of history. 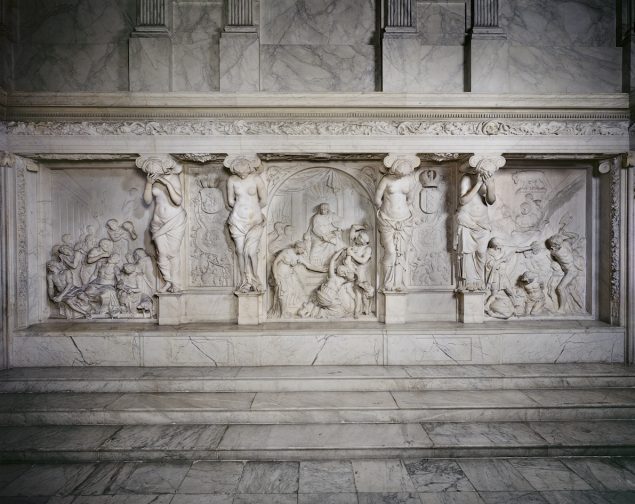