Inside the Royal Museum of Fine Arts in Antwerp

My first experience of working at the Royal Museum of Fine Arts Antwerp (Koninklijk Museum voor Schone Kunsten Antwerpen) dates from the period 2007-2008, when I started as a researcher for the Flemish Art Collection (Vlaamse Kunstcollectie) at its Antwerp location. This position at the Flemish Art Collection was my first job in the museum world. Until completing my doctoral dissertation in 2007, I was mainly active in an academic context. I worked at the Catholic University of Leuven (Katholieke Universiteit Leuven) and the Free University of Brussels (Vrije Universiteit Brussel), doing research on sculpture of the Southern Netherlands for projects financed by the Flemish Fund for Scientific Research (Fonds voor Wetenschappelijk Onderzoek Vlaanderen, or FWO). The focus was on the sculpture produced in the Southern Netherlands from the fifteenth through the eighteenth centuries, more specifically the material and technical aspects of fifteenth- and sixteenth-century retable fragments, and I was also involved in large-scale research into Baroque church furnishings in Flanders. In the end, the subject of my dissertation became the sculptural and architectural elements of Southern Netherlandish retables in the seventeenth century.

It was more by accident that I ended up doing this scholarly research, because my very first job was at the Galerie Micheline Szwajcer, which specializes in international conceptual art, arte povera and contemporary Belgian art. But once I had immersed myself in Southern Netherlandish Baroque sculpture, I became increasingly captivated by the particular attraction sculpture can exert on people. Unlike painting, sculpture – because of its three-dimensionality – is a tangible presence. In the Early Modern Period, moreover, sculpture came to be characterized by a high degree of realism. In portraiture, to be sure, the combination of these two qualities led to the creation of timeless masterpieces, whose physicality contributes greatly to their appeal. In my opinion, some Southern Netherlandish sculptors measure up to their illustrious Italian predecessors in this regard. Artus Quellinus the Elder’s poignant likeness of Luis de Benavides Carillo, governor of the Spanish Netherlands, is therefore one of my favourite works in our collection. It’s almost as though you can see the blood coursing through the veins in the hands of this imposing man! 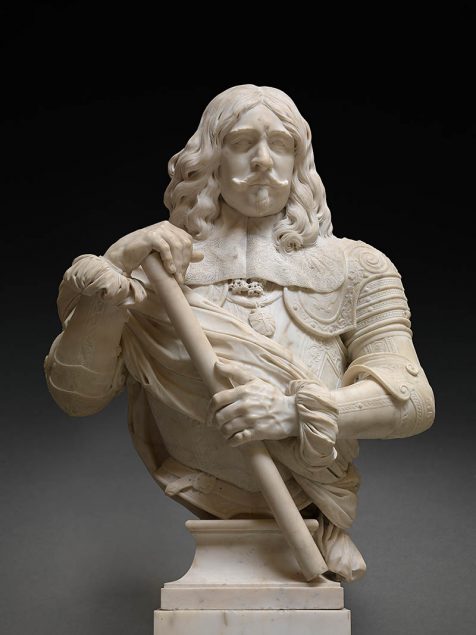 The Flemish Art Collection is a structural partnership between the art-historical museums of Flanders: the Groeninge Museum Bruges, the Museum of Fine Arts Ghent and the Royal Museum of Fine Arts Antwerp. The collections of these three large Flemish museums offer an impressive overview of the art history of the Southern Netherlands and Belgium from the Middle Ages to the twenty-first century. Each of them boasts choice pieces by old and not-so-old Flemish masters – works that can be counted among our global heritage. As the result of an internal reorganization within the Flemish Art Collection, I became a permanent member of staff of the Royal Museum of Fine Arts Antwerp in 2008, beginning as a researcher in the Department of Collections. 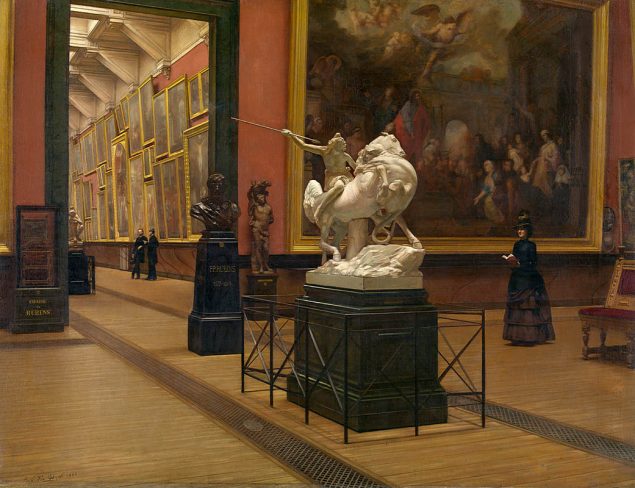 The Royal Museum of Fine Arts in Antwerp is a child of the French Revolution. The origin of the collection lies in the holdings of the Royal Academy of Fine Arts of Antwerp. Founded in 1663, the Academy was one of the oldest in Europe. After the French Era, this venerable institution was given a new lease on life in 1804, when it moved to the buildings of the former Antwerp Convent of the Friars Minor, where the Academy’s museum was also housed. This collection formed the core that was later augmented with works confiscated from important Antwerp convent churches, which had disappeared during the French Era. Among this latter group were many highlights of seventeenth-century Antwerp masters, such as Rubens, Van Dyck and Jordaens.

In 1890, the KMSKA was given new accommodation in Antwerp’s ‘Zuid’ (‘South’) quarter, an area of the city then under development. The building – designed by the architects Jan Jacob Winders and Frans Van Dijk, and conceived as a temple of art – was built in an eclectic style that combines classicist ideas with elements typical of the Southern Netherlandish Renaissance. In the entrance hall, visitors are welcomed by the great masters of Antwerp art history, a series of paintings by Nicaise De Keyser. A grand staircase leads to the first floor. Here, literally in the heart of the building, is the so-called Rubens Room, where monumental works by our Antwerp Apelles have pride of place. 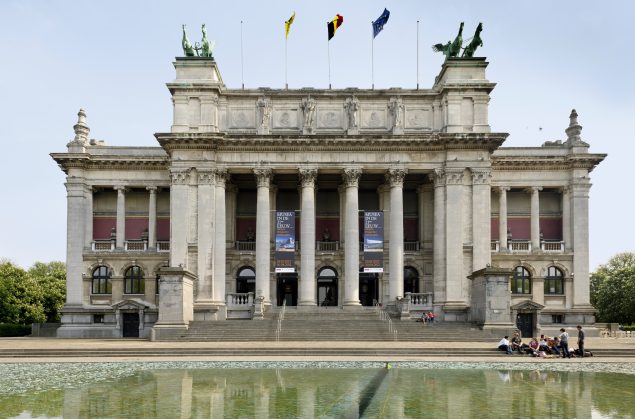 In the course of its history, the collection of the KMSKA obtained, through important gifts or the collecting policies of its directors, new accents that have grown into the pearls of its collection. Thanks to the generosity of Sir Florent van Ertborn, the Franck family and Dr Ludo van Bogaert, works by the Flemish Primitives, James Ensor and Rik Wouters, respectively, have become spearheads of the museum’s collection. The focused and sustained acquisition policy of chief curator Walter Van Beselaere led to a representative group of Flemish Expressionists in the collection. The fact that the KMSKA was also a museum of contemporary art until the 1960s is reflected by its holdings, more than one-third of which are works from the twentieth century. The collection of the Royal Museum of Fine Arts Antwerp presently comprises  4,164 works, including almost 2,300 paintings. The earliest works date from the thirteenth century, the latest from the twenty-first century. In addition, there are several special collections, such as graphic works after Rubens and a medals collection of national importance, as well as the collection of bozzetti belonging to the Van Herck family, numbering altogether another 1,099 works. The Van Herck collection is one of the many long-term loans by private as well as public owners, including the Flemish authorities and the King Baudouin Foundation. The KMSKA has in its possession a number of notable works by such world-famous artists as Titian, Jean Fouquet, Auguste Rodin, Amedeo Modigliani and Ossip Zadkine. 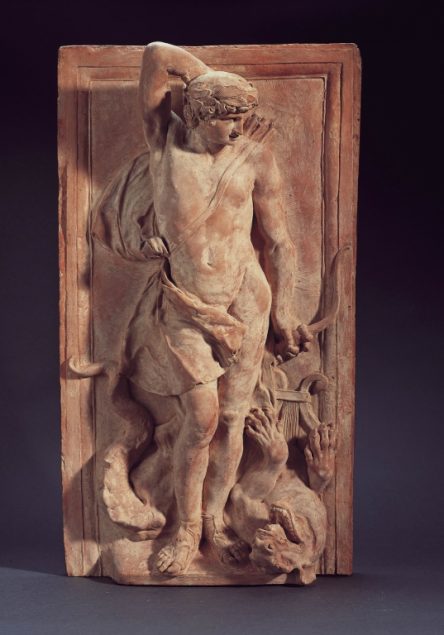 Soon after my appointment, I was given the opportunity to curate an exhibition focusing on one of the highlights of the KMSKA’s sculpture collection: the unique ensemble of four Baroque portrait busts, comprising the previously mentioned work by Quellinus, as well as the splendid likenesses of Maximilian II Emmanuel by Willem Kerricx and of Juan Domingo de Zuñiga y Fonseca by Lodewijk Willemsens – both governors of the Spanish Netherlands – and of Philip V, King of Spain, by Jan Pieter van Baurscheit the Elder.  Thanks to the cooperation of museums both in Belgium and abroad (including the Rijksmuseum and the Louvre), I managed to assemble around a hundred beautiful examples of Baroque portrait sculpture in the exhibition Heads on Shoulders: Portrait Busts in the Low Countries 1600-1800. The nicest thing I heard from a visitor was that he felt like he was being watched, a compliment that illustrates the expressive power of these magnificent portraits. 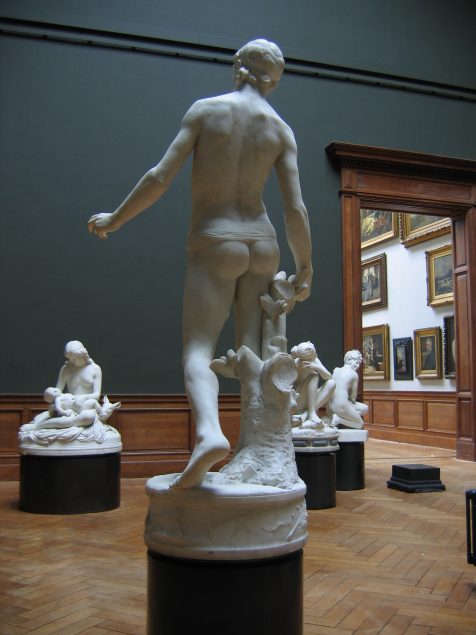 Presentation of nineteenth-century sculpture in the KMSKA

Together with my colleagues Nico Van Hout and Christine Van Mulders, I am also an active member of the Rubens Research Project, set up with the support of the Getty Research Foundation. Within the framework of this project, the sub-collection of works by Peter Paul Rubens has been subjected to in-depth art-historical, material, technical and photographic research, the results of which have already been shown to the public in small-scale exhibitions and publications. For instance, I published Rubens Unveiled: Paintings from Lost Antwerp Churches, a book that reconstructs the original context of Rubens’s works from the vanished convent churches of Antwerp. I also coordinated the publication of the online magazine Rubensbulletin.

In September 2011 the KMSKA closed its doors for thoroughgoing renovations. The master plan, by KAAN Architects of Rotterdam, contains plans not only for renovations but also for new construction. The existing, nineteenth-century building is being restored to its former glory and additional exhibition spaces are being created in the four patios belonging to the historic museum building. This ingenious intervention will, in effect, give us what amounts to an additional museum that will not even be noticeable from the outside.

As colleagues who have experienced similar renovations well know, a closed museum certainly doesn’t mean a lack of work for the curators.  Not only have KMSKA exhibitions continued to take place at host venues, but the new collection presentation and the future exhibition programme demand lengthy and intensive preparations. A couple of years ago, I acquired additional responsibilities when I assumed the position of Curator of Sculpture in charge of the approximately 400 works in our sculpture collection. In future, the presentation of the museum’s collection will be based on the principle of mixed display, which means that sculpture will be present in nearly every room of the new museum and there will definitely be much more of it on display than there used to be. As Curator of Sculpture, I can only applaud these developments. At the same time, of course, this requires more groundwork and consultation with my fellow curators.

Another important aspect of the preparations for the reopening, now planned to take place in the autumn of 2019, is to insure that the works can be shown in optimum condition. Together with my colleague Cleo Cafmeyer, a sculpture restorer, I am working on a conservation plan that lays out the requirements and planning of the desired conservation treatments. To be sure, a large part of the sculpture collection consists of nineteenth-century works that unfortunately drew less attention in the last century. The new presentation hopes to change this, but there is much to be done before everything is in top viewing shape.

In 2017, not only will all these preparations take on more concrete form – the design of the display, for example – but I will also be finishing my work as a contributing author of the Corpus Rubenianum Ludwig Burchard catalogue project. As part of the collaboration between the KMSKA and the Centrum Rubenianum, various curators at our museum are working on this oeuvre catalogue of Peter Paul Rubens, the first volume of which appeared in 1968 and the completion of which is planned for 2020. My contribution treats Rubens’s designs for architectural sculpture, more specifically the framing of altarpieces and epitaphs.

Combining the writing of this scholarly publication with my curatorial duties during the long process of the museum’s renovation is a daily balancing act. The fact that more sculpture will be on display throughout the museum, in both the nineteenth- and twenty-first-century buildings, is fantastic for my department, of course, but it also means that I’m involved in every facet of the selection and new display of the collection. Each aspect demands a great deal of attention, but I embrace the challenge presented by this continual shift of focus. After the completion of the Corpus Rubenianum volume in 2018, I will again be able to devote myself to preparations for the reopening on a full-time basis, which certainly won’t be an unnecessary luxury!

Information about the new museum can be found on the microsite www.hetnieuwemuseum.be