Before starting on my undergraduate degree course at the University of Amsterdam, I spent a year in Athens on an exchange program. I spent many hours wandering around the city, and by the end of my stay I knew the city like the back of my hand. Within the subject area of Art History and Archaeology (1989-1995), I chose to specialize in the Early Modern Period, and attended workshops and lectures by specialists including Hessel Miedema, Rob Ruurs, and Ernst van de Wetering. I did an internship at Museum Rotterdam, where I contributed to the exhibition Rotterdam Masters of the Golden Age, and spent six months in Padua, with a grant from the Erasmus program. For my thesis, I researched the basis on which painters chose to specialize in particular genres in the seventeenth century.

After a brief internship at Amsterdam University Museum (Allard Pierson Museum), I spent five years working on the registration of the collection of prints and photos in Amsterdam University Library. When that project came to an end, I was able to start work almost immediately as a registrar at one of the precursor institutions of the Cultural Heritage Agency. In the fifteen years that I held that position, I became very familiar with the collection, in addition to which I became more and more involved in the management of several of the Agency’s large collections outside those held in our depot. In 2016 a long-cherished dream was fulfilled when I was invited to take on the position of curator. I took charge of the collection of pre-Modern applied arts, with a special focus on loans of objects from our collection. I am also responsible for a number of interior ensembles, which are preserved outside our storage facility. 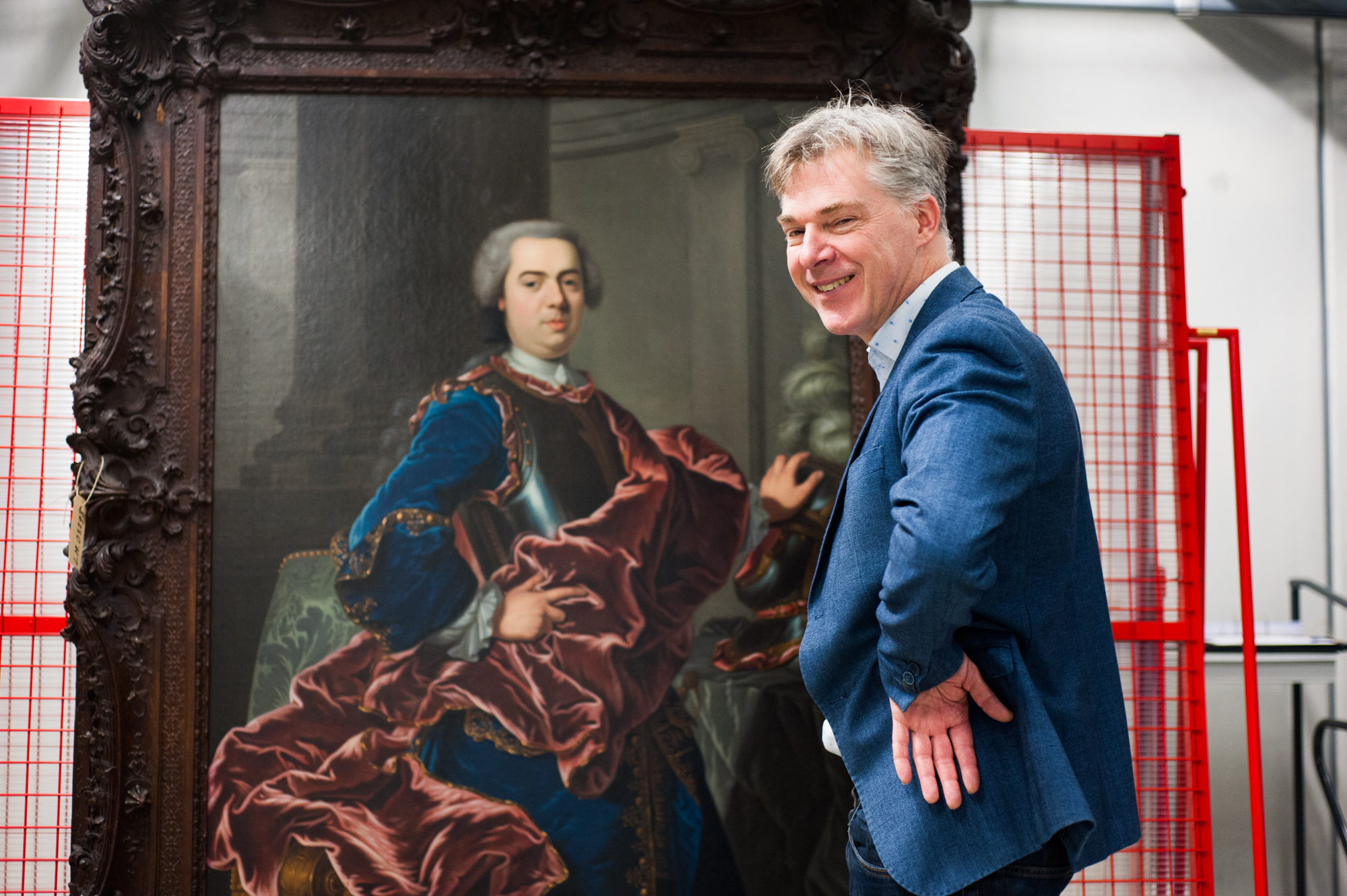 Before I discuss my work in more detail, I think it is helpful to give a brief summary of the history of the State Art Collections. Plans for a Dutch equivalent of the French Mobilier National – that is, a national art depot – were first devised in the 1930s, but the new agency (initially called the Dienst voor ‘s Rijks Verspreide Kunstvoorwerpen) did not materialize until 1949. It took on the management of a heterogeneous group of collections, including artworks recovered from Germany and others bought by the State Purchasing Committee from the 1930s onwards. Later, artworks were added from the Artists’ Subsidy Plan (BKR Regeling), as well as the agency’s own purchases and the gifts it received. The agency provided decorations for government buildings such as ministries and embassies, while also arranging loans to Dutch museums.

Today, following a series of mergers and amalgamations,  the collection is managed in its entirety by the Art Collections Department of the Cultural Heritage Agency, and consists of some 122,000 objects. Of these, about two-thirds are in storage. Since the summer of 2021, our depot has been part of the Dutch Collection Center (CCNL) in Amersfoort, a brand new, state-of-the-art depot that is shared with the Rijksmuseum, Het Loo Palace and the Netherlands Open Air Museum.

However, the Agency differs in one key respect from its three partners in the CCNL: we do not have our own museum space. Our objects are displayed on loan to Dutch museums and a few foreign ones. Around 200 museums have one or more objects on loan from the Agency: ranging from a single item to museums that have thousands of objects on loan, such as Centraal Museum Utrecht, Museum Arnhem, Zeeuws Museum and Stedelijk Museum Amsterdam. We also loan objects to government buildings including Dutch embassies and ministries. At the moment, some 32,500 objects are out on loan to diverse institutions. 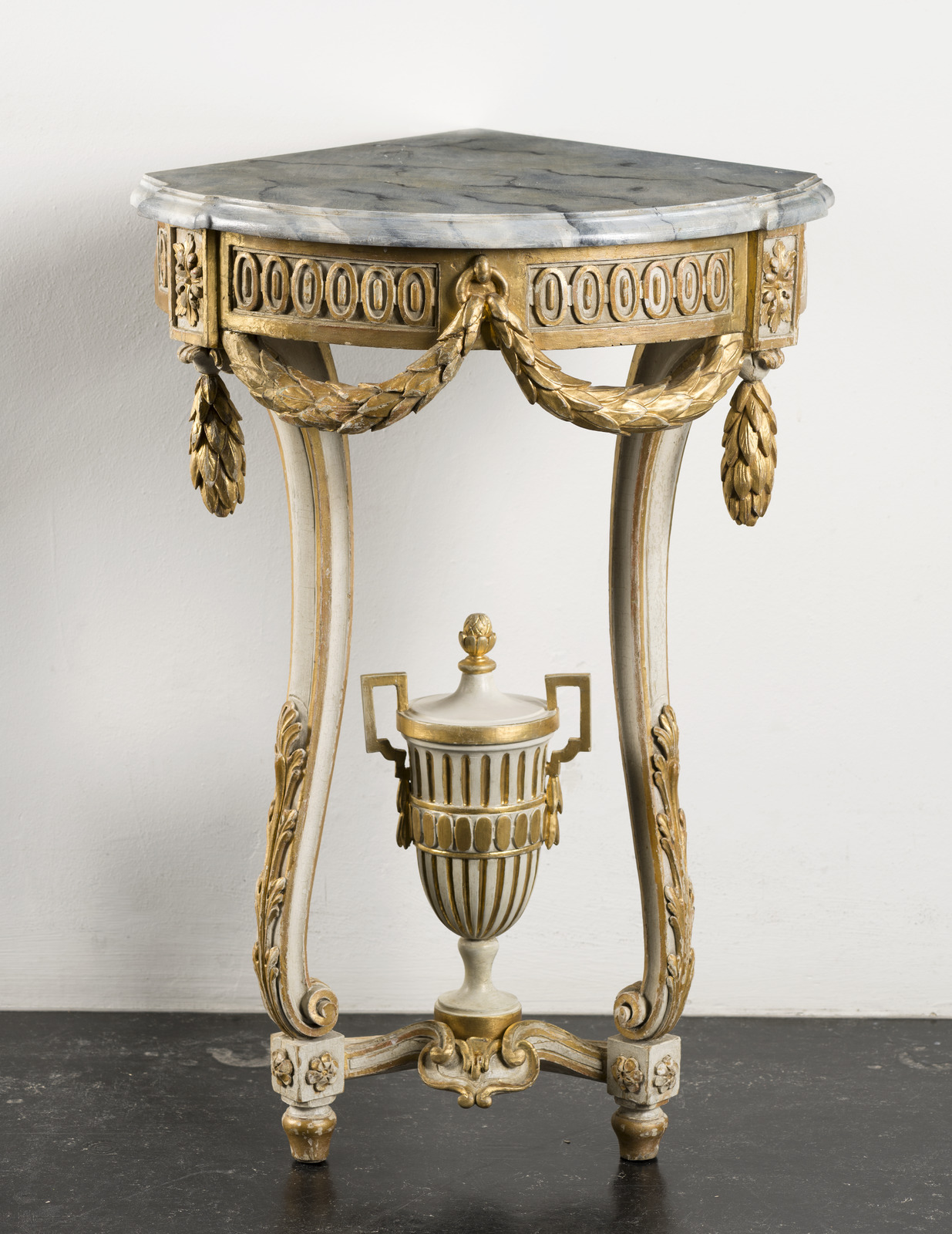 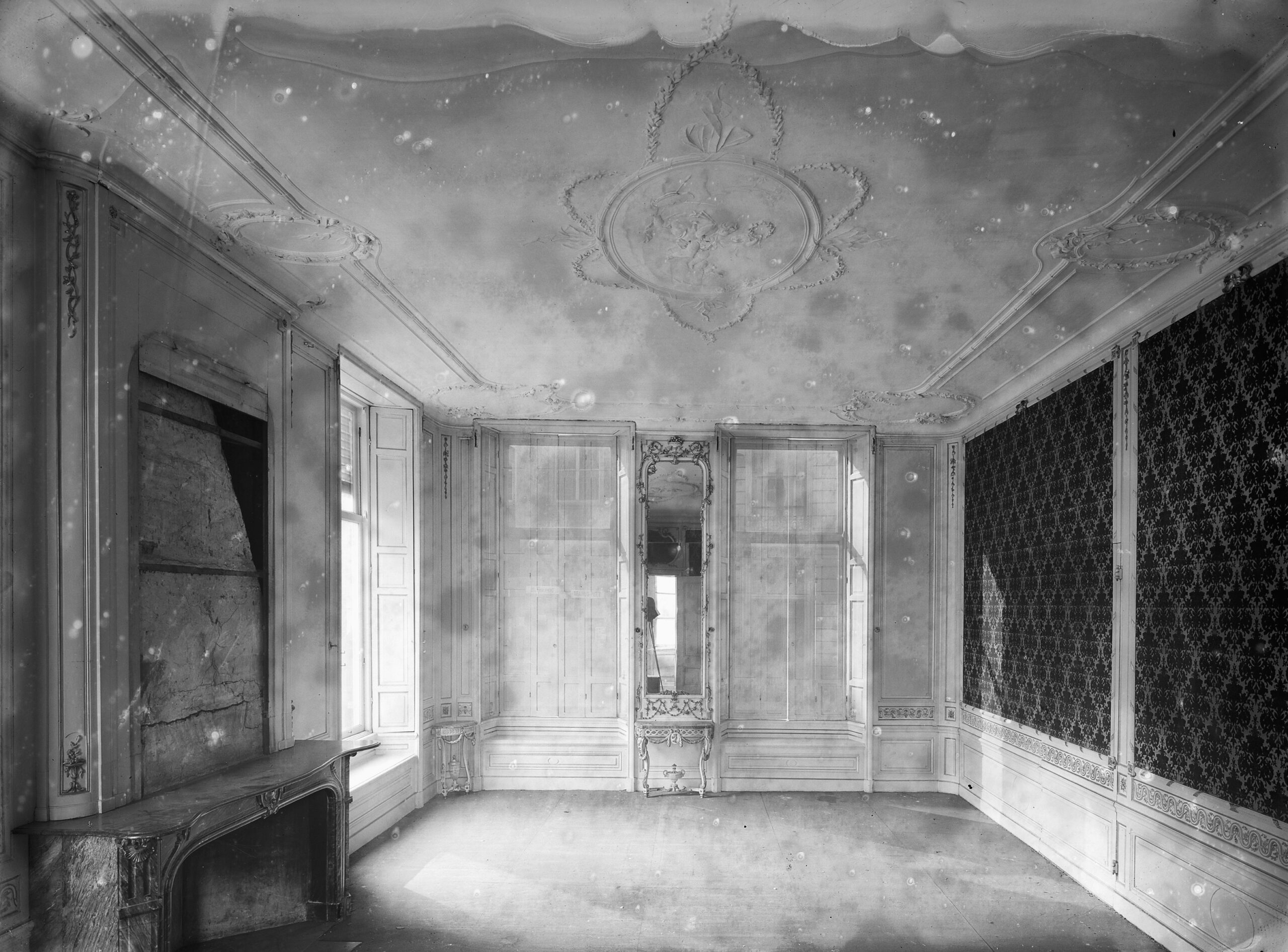 Console table in situ in Buitenhof 28, The Hague, photo from October 1922

A limited amount of research is conducted on objects from the Agency’s collection. Usually this is done for a book or virtual publication, such as a catalogue of acquisitions or research into evidence of slavery and the Netherlands’ colonial history. Museums that have our objects on loan often also carry out research for exhibitions or collection catalogues. Occasionally a chance discovery prompts limited research on an object from our collection. My colleague Stephan de Vries, while looking at an old photograph, saw that it depicted a console table that was to be sent on loan to Museumhuis Van Eysinga in Leeuwarden. It was clear from the photograph that the table came from an important house at Buitenhof 28 in The Hague. That house was demolished around 1924, but it had evidently been photographed in detail prior to demolition. More images of the interior came to light, and could be linked, making it possible to reconstruct the interior on paper. I will present the results of this research at the upcoming Ebenist symposium on 25-26 March.

The movable collection regularly features in the Agency’s periodical, which covers all its fields of activity. The results of restoration research are presented alongside exhibitions of objects from the Agency’s collection. One of the most popular sections of the periodical is called “Kunst zoekt plek” (“Artwork seeks Home”), in which objects that have long languished in the Dutch National Art Collection are placed in the limelight, in the hope of finding an institution that would like to take them on loan. It has proven a successful strategy. For example, the Dutch National Library had a gigantic bookcase for which there was no space when it moved to its current location. The bookcase was then transferred to the Agency. A few years ago, the huge structure finally found an ideal location in Arcen Castle. Another example: ten years ago, the Mauritshuis transferred a number of objects to the Agency, including a grandfather clock that had previously stood in the hall. This clock now plays a tune every half hour in the Kampen Municipal Archives. I should also mention the two splendid chandeliers from the Trêves Room at the Binnenhof in The Hague. This room was designed by Daniel Marot at the end of the seventeenth century. Today, it is part of the Ministry of General Affairs and is used for Cabinet meetings. However, the room lacked suitable lighting. At the end of the 1980s, the two chandeliers were designed for this room to match the decorations. However, they turned out not to emit enough light, and were therefore transferred to the Agency. They were featured in “Artwork seeks Home” and were split up, one going to Slangenburg Castle near Doetinchem and the other to the Gemeenlandshuis on Diemerzeedijk near Amsterdam. 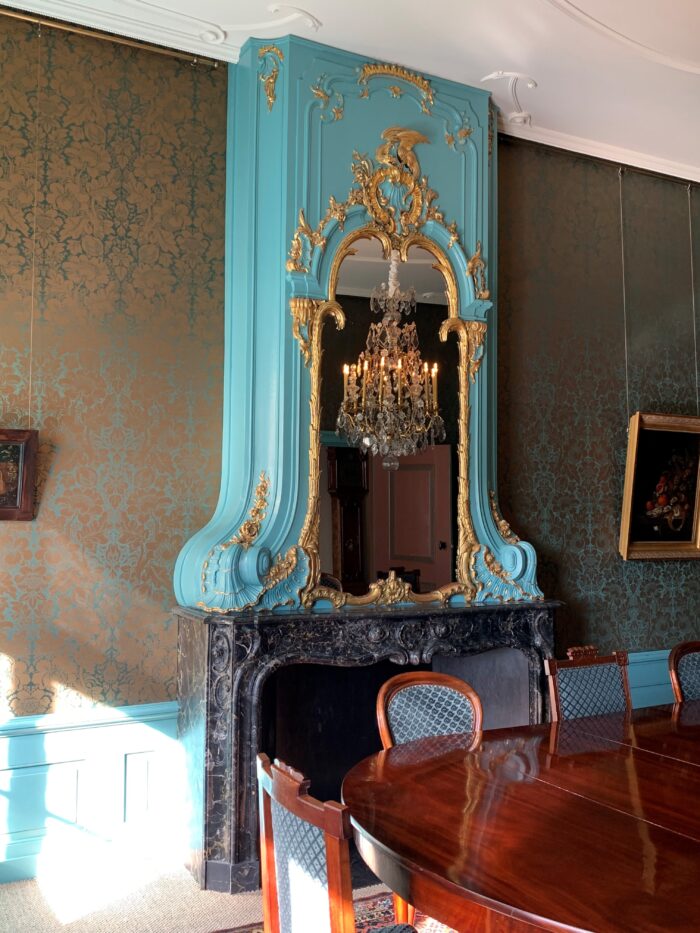 What I particularly enjoy about my work as curator of Art Collections is being able to respond to the many loan requests that our team receives. In consultation with the applicant, we then consider which objects are most suitable for a particular location. Sometimes such a request is very specific, but more often than not, the exact details are initially unclear. During CODART 22 in Berlin in 2019, for example, Marjan Scharloo of Teylers Museum requested our help with the interior of Pieter Teyler’s House. This involved finding items to match the house’s interior as it looked according to the probate inventory when Teyler died. We eventually selected a cabinet and a beautiful Rococo chimneypiece, which had previously been part of the official residence of the Dutch Prime Minister, the Catshuis. The chimneypiece was restored to its original colors and installed in a room on the first floor. The house has been open to the public since December 2021.

Besides the collection of pre-Modern applied arts, which is my responsibility, I also concern myself with three interior ensembles that are managed by the Agency. The most striking of these three is undoubtedly the former Soestdijk Palace. This palace, whose main structure dates from the seventeenth century but that was expanded to its present size for King William II in the early nineteenth century, ceased to be used as a royal residence after the death of Queen Juliana and Prince Bernhard. It was sold to a commercial buyer a few years ago, but only after part of the interior ensemble had been safeguarded by sale to the state. The oldest ensembles are those from the time of the renovation for King William II, around 1815, such as the imposing reception hall (Stuczaal) and the Waterloo Hall, while the most recent ones date from around 1937, when the palace was converted into the main residence for Juliana and Bernhard. The dining room, the cinema, and the sports pavilion are fine examples of this. This spring, the palace will be dismantled for restoration purposes, and the entire interior will be transferred to our depot. Quite a challenge!

Yuri van der Linden is Curator of Pre-Modern Applied Arts at the Cultural Heritage Agency (Rijksdienst voor het Cultureel Erfgoed) in Amersfoort. He has been a member of CODART since 2016.