The Frans Hals Museum in Haarlem announced the purchase of a painting by marine painter Jan Porcellis (1584 – 1632). Ships in a Storm is an early and well-preserved seascape dating from around 1618-22. Porcellis brought about a revolution in painting seascapes – precisely in his Haarlem period (1622-24).

Jan Porcellis was one of the most celebrated marine painters in the seventeenth century. In 1622, after an unsettled existence, he came to Haarlem, where according to the artists’ biographer, Arnold Houbraken, he had previously been apprenticed to the marine painter Hendrik Vroom. Vroom was known for his impressive, colourful scenes full of anecdotal details. Porcellis, by contrast, introduced context: he showed ships in convincing perspective in relation to one another and blended his colours to produce a persuasive spatial effect. He conveyed the forces of nature in subtle shades of brown and grey, from silvery white to ominous dark. Other marine painters followed, and despite Porcellis’s relatively short stay in the city (until 1624) his reputation and fame soared in Haarlem. The city’s historian, Samuel Ampzing, praised Porcellis in his 1628 book as ‘the greatest artist of ships’ in Haarlem. In 1678 the painter and biographer Samuel van Hoogstraten called him ‘the great Raphael of marine painting’. 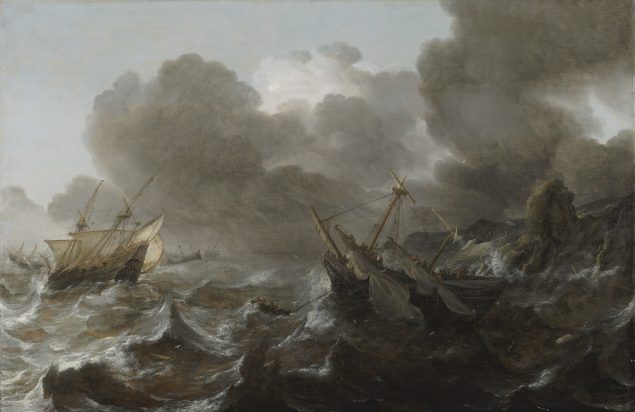 Ships in a Storm

The two most distinguished Porcellis specialists, Dr John Walsh and Dr Gerlinde de Beer, identify Ships in a Storm as an autograph, top-quality, well-preserved work by the artist. De Beer specifically notes that this was the first time Porcellis had placed two ships in the water at an angle, one behind the other, with convincing perspective – an invention that would garner a huge following. John Walsh added, ‘It was in Haarlem that Porcellis began to paint seascapes with truly convincing effects of weather and atmosphere. Shipwrecks, like this especially fine one – bleak and violent in sea and sky – gave his audience shivers, and plenty to think about: fortunes were made in ships like these, but some went on the rocks, helpless in the grip of God’s power.’

Until now the Frans Hals Museum had no works by Porcellis despite his obvious connection with Haarlem and his enormous importance to Dutch art in general. Ships in a Storm fills this gap splendidly. The museum has three masterpieces by his possible teacher, Hendrick Vroom. Other major Haarlem marine painters like Van Wieringen and Verbeeck are also very well represented in the collection. The fundamental innovation brought about by Porcellis – precisely in his Haarlem period – is evident in Ships in a Storm. The painting is a pivotal work in the collection. Porcellis’s impact is clearly reflected in seascapes by Allaert van Everdingen, who was a passionate collector of Porcellis’s works (he owned no fewer than thirteen of his paintings) and the work of Pieter Mulier.

Porcellis’s oeuvre is relatively small; at present we know of sixty or so paintings and some thirty drawings by him, as well as a set of etchings to his design. In the Netherlands Collection only four museums have paintings by Porcellis: The Rijksmuseum in Amsterdam, Boijmans Van Beuningen Museum in Rotterdam, the Lakenhal in Leiden and the Mauritshuis in The Hague. Porcellis’s works in these museums all date from around 1630. Ships in a Storm, which the Frans Hals Museum | De Hallen Haarlem can now add to its collection, can be dated to around a decade before that, making it a significantly earlier pivotal date in Dutch painting.