Rose-Marie and Eijk van Otterloo and CODART Patrons Susan and Matthew Weatherbie have made a commitment to give their exceptional collections of 17th-century Dutch and Flemish art to the Museum of Fine Arts in Boston (MFA). The Boston-area collectors plan to give the MFA not only their art collections, but also funding to establish a Center for Netherlandish Art at the MFA, which is scheduled to launch in 2020. In addition, the Van Otterloos will give a major research library to serve as a resource for the center.

In celebration of this historic milestone, the museum has created a special display in its European galleries, juxtaposing a selection of works from each collection with Dutch and Flemish paintings from the MFA’s holdings.

Information from the press release, 11 October 2017

By integrating these two exceptional private collections—formed by the Van Otterloos and Weatherbies through decades of committed connoisseurship—with the MFA’s, the Museum will nearly double its holdings of Dutch and Flemish paintings. Beautifully conserved and of the highest quality, works from the promised gifts include all categories of Dutch painting for which the republic of the Netherlands was (and is) best known— portraits, genre scenes, landscapes, seascapes, still lifes, flower pictures, cityscapes and architectural paintings. Together, they afford insight into the 17th-century Dutch way of life, whether it’s through a humorous genre scene by Jan Steen, a luxurious still life by Willem Kalf, a poetic landscape by Jacob Isaacksz. van Ruisdael, an atmospheric marine by Willem van de Velde the Younger or a vibrant flower picture by Rachel Ruysch. Among the Flemish paintings are important oil sketches by Peter Paul Rubens, portraits by the influential Anthony van Dyck, works by pioneering still life painter Osias Beert, and landscapes by Jan Brueghel the Elder. 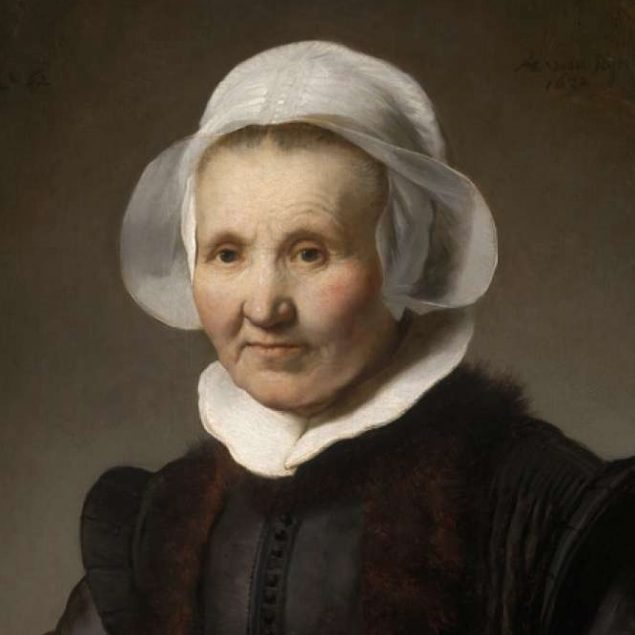 A major highlight of the gifts is Rembrandt Harmensz. van Rijn’s moving Portrait of Aeltje Uylenburgh (1632). In nearly perfect condition, the portrait displays delicate tones of black-on-black and virtuosic control of the brush. Aeltje Uylenburgh was the cousin both of Rembrandt’s wife-to-be, Saskia, and the prominent art dealer Hendrick Uylenburgh, with whom Rembrandt lived when he first arrived in Amsterdam. In addition to subtly describing the inner life of the subject, the painting provides a crucial bridge between Rembrandt’s early years in his native Leiden, exemplified by the MFA’s Artist in his Studio (1628), and his establishment as a successful portraitist in Amsterdam, illustrated in works such as the Museum’s Reverend Johannes Elison (1634) and Maria Bockenolle (Wife of Johannes Elison) (1634). The gift of Aeltje will bring the number of Rembrandt paintings in the MFA’s collection to an astounding six and is one of many instances where the promised gifts will complement the MFA’s holdings.

The Van Otterloo and Weatherbie gifts, together with the MFA’s collection, will serve as the foundation for all activities of the Center for Netherlandish Art. The Center, expected to launch in 2020, will be dedicated to preserving, studying and sharing art from the 17th-century Netherlands in New England and around the world.

Leadership in teaching, mentorship and related scholarship—an area of emphasis in the Museum’s strategic plan, MFA 2020—will be a major focus of the Center. Through partnerships with a wide range of institutions, including universities and liberal arts colleges, the Museum will bring creative minds together and actively engage professors and students in the study of world-class objects. With the goal of creating a robust program of new exhibitions and installations, the Center will provide hands-on experience for aspiring curators. The MFA will also offer a sustained and generous program of loans in order to share the collection widely with museums and educational institutions in the U.S. and abroad.

Academics from around the world will enjoy access to one of the premier resources for Dutch and Flemish art. A promised gift from the Van Otterloos, the Haverkamp-Begemann Library encompasses more than 20,000 monographs, catalogues and rare books assembled by the late art historian Egbert Haverkamp-Begemann.

Significant highlights of the Van Otterloo and Weatherbie gifts

The depth and breadth of the Van Otterloo and Weatherbie gifts are evident in the variety of artists and genres represented. Nearly two-thirds of the artists represented in the Van Otterloo and Weatherbie collections, including Hendrick Avercamp, Aelbert Cuyp, Willem Claesz. Heda, Willem Kalf and Gerrit van Horthorst, will be new to the Museum’s holdings of paintings. 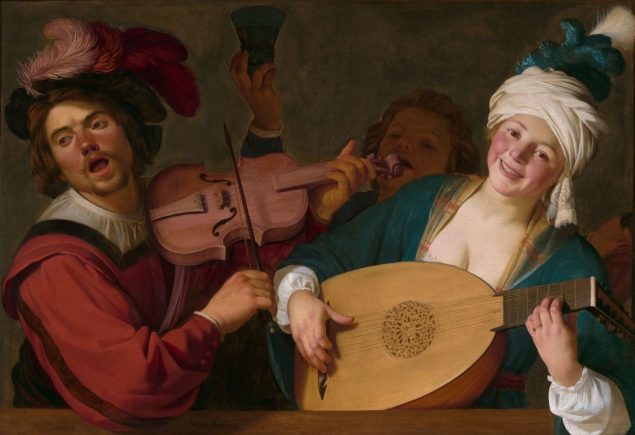 Gerrit van Honthorst (1592-1656), A Merry Group behind a Balustrade with a Violin and a Lute Player, ca. 1623
Oil on canvas. Rose-Marie and Eijk van Otterloo Collection

Avercamp’s picturesque Winter Landscape near a Village (about 1610-15), depicting men, women and children skating, fishing and playing kolf (golf) on the ice remind us of the very cold winters of Europe in the early 17th century—an era now known as the “little ice age.” Cuyp’s Orpheus Charming the Animals (about 1640), a rare mythological scene in the artist’s oeuvre, shows the poet from Ovid’s Metamorphoses playing the violin instead of his customary lyre. This subject demonstrates Cuyp’s early interest in integrating animals into his landscapes—a type of composition for which he would be particularly known. Honthorst’s illusionistic A Merry Group behind a Balustrade with a Violin and a Lute Player (about 1623) invites viewers to participate in a musical party. The painting will complement the MFA’s paintings by Hendrick ter Brugghen and Dirck van Baburen, the other important members of the group now called the Utrecht Caravaggisti—Dutch painters who brought Caravaggio’s style north with them on their return from sojourns in Rome.

The MFA is strong in Dutch history paintings and portraits and holds good examples of the other types of works produced by the many skilled artists active in the period,” said Ronni Baer, William and Ann Elfers Senior Curator of Paintings. “This gift of beautifully preserved paintings will fill major gaps in the collection and allow us to present the full range of artistic production in the Netherlands in the 17th century in varied and meaningful ways.”

Works by Dutch masters Gerrit Dou and Pieter Jansz. Saenredam will also complement the MFA’s holdings. Dou’s Dog at Rest (1650) is a perfect example of the fine brushwork and endearing subject matter that made the artist one of the most successful painters of the day, while Saenredam’s Interior of the St. Bavo Church, Haarlem (1660) and North Transept and Choir Chapel of the Sint Janskerk, Utrecht (1655) exemplify that artist’s careful study of the actual buildings and his mastery of tonal nuance.

The Van Otterloo and Weatherbie collections also include important still lifes by Pieter Claesz., as well as two extraordinary examples by other masters of the genre. Willem Kalf specialized in sophisticated compositions featuring expensive commodities. In Still Life with Lemon Peel (1664), his hallmark strategy of arranging special, spotlit objects as they emerge from a dark background is fully on display. In Willem Claesz. Heda’s Still Life with Glasses and Tobacco (1633), the artist expertly captures a wide range of materials and reflections. The objects appear to be strewn across the table, but Heda arranged them carefully to create interesting shapes and establish tonal harmonies. Flower pictures, from Still Life with Roses in a Glass Vase (about 1619) by Ambrosius Bosschaert the Elder to Still Life with Flowers (1709) by Rachel Ruysch— one of the few prominent female artists of her era—will allow the MFA to trace the development of this important genre throughout the course of the 17th century. 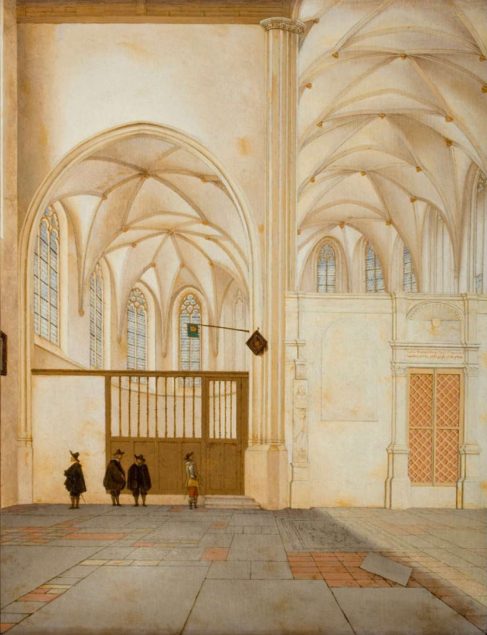 In addition to still lifes, cityscapes will be included in the gifts. View of Haarlem (1671) by Gerrit Berckheyde and View of the Westerkerk, Amsterdam (about 1667–70) by Jan van der Heyden offer exquisitely detailed and accurate depictions of the two major centers of art production in the 17th century and are prime examples of the genre. Many of Haarlem’s important landmarks can be identified in the background of Berckheyde’s work, while Van der Heyden’s painting of the Westerkerk in Amsterdam was studied to help determine the correct shade of blue to repaint the crown when the church underwent restoration in 2006-07. 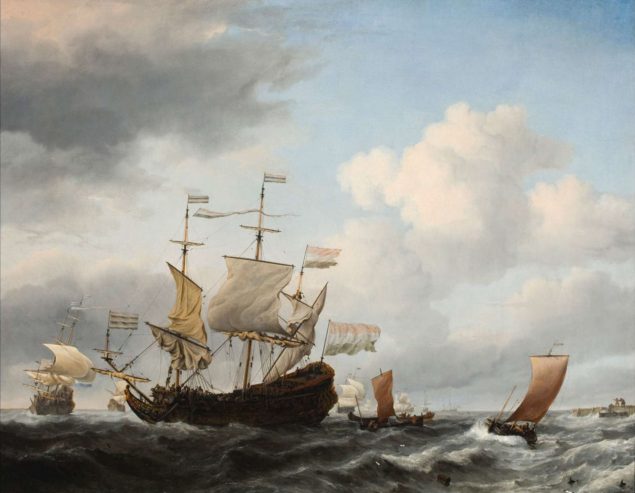 Willem van de Velde, the Younger (1633-1707), A Dutch Flagship Coming to Anchor Close to the Land in a Fresh Breeze, ca. 1672
Susan and Matthew Weatherbie Collection

Seascapes, which demonstrate the omnipresence and importance of water in the Netherlands, will also be a significant part of the gifts. Paintings by Willem van de Velde the Younger, among the most important marine painters of the time, showcase his careful observation of details and talent for capturing atmospheric effects. The artist’s A Wijdschip in a Fresh Breeze (about 1665–70), Fishing Boats by the Shore in a Calm (about 1660–65) and A Dutch Flagship Coming to Anchor (about 1672), as well as representative examples by Jan van de Cappelle, Jan Porcellis, Simon de Vlieger, Jan van Goyen, Salomon van Ruysdael and Aert van der Neer, will join Jacob Isaacksz. van Ruisdael’s Rough Sea (about 1670), the only notable seascape in the MFA’s collection of 17th-century Dutch paintings.