In collaboration with the Van Gogh Museum, The RKD – Netherlands Institute for Art History has been carrying out museum-led research for the exhibition The Dutch in Paris 1789-1914. The investigation focuses on the artistic exchanges that occurred when Dutch artists flocked to Paris in the nineteenth century, and the art that resulted from these exchanges. Where did they live? Who did they meet? What ideas and views did they bring back with them? And what sort of art? In order to visualize the results of the research the RKD has developed a special application called Mapping Artists.

Using a map of Paris, this geotagging tool shows at a glance where artists’ studios and living quarters are. Via RKD Explore (www.rkd.nl) you can retrace the steps of Dutch artists who visited the city between 1789 and 1914. Using this application, an innovative visual account can be given of where these Dutch artists lived and worked but also exactly where in Paris they produced certain works and what artistic exchanges they were involved in. 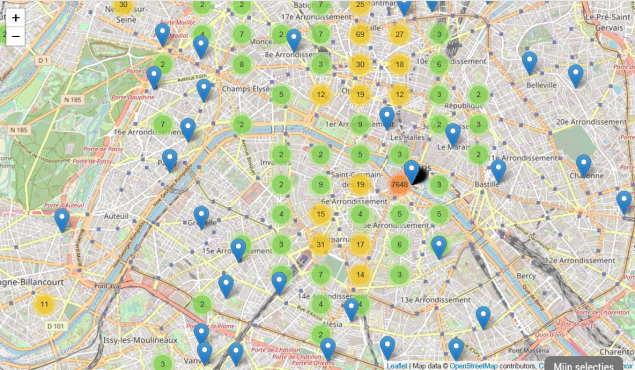 Mapping Artists visualises the location of studios and home addresses of Dutch artists in Paris.

The museum-led research started from the realization that art is a mixture of national and international components. Over the course of the nineteenth century, the interaction and mutual influence between artists in different countries increased as more of them traveled and even set up home abroad. Approximately 35-40 % of Dutch artists working in the nineteenth century lived outside the Netherlands for a considerable length of time. Dutch artists influenced the local art scene through exhibitions and commissions, while their own work and ideas were in turn influenced by the art they encountered during these foreign sojourns. On their return home, their impressions shaped the national art scene. As time went on, Paris and its environs became ever more popular with Dutch artists.

In recent decades the RKD’s databases RKD Artists and RKD Images have been enriched with geographical data as well as information about the careers of artists. This data can now be brought up on a map, which means that it is possible to see where artists were born, lived and died as well as the whereabouts of particular works of art. This is a huge step towards making information of this kind more available and accessible to a wider audience.

Geotagging functionality is currently still in its infancy but already it can be described as a milestone. Our next step will be to develop a more refined search tool, with historic maps and more data (including information about foreign and French artists in Paris). This will enable researchers to compare and analyses search results (data sets) retrieved from the RKD databases.

In the current major exhibition The Dutch in Paris 1789–1914, the Van Gogh Museum is presenting the French capital through the eyes and hearts of eight Dutch artists: Van Spaendonck, Scheffer, Jongkind, Kaemmerer, Breitner, Van Gogh, Van Dongen and Mondrian. With the Van Gogh Museum, The RKD – Netherlands Institute for art History conducted research for this exhibition, resulting in important contributions to the catalogue as well as the development of Mapping Artists, a digital tool that visualises the location of studios and home addresses of artists in Paris.

The exhibition focuses on the inspiration that Dutch artists found in Paris through, for example, their contact with French colleagues and the impact this had on their art. The Dutch in Paris 1789-1914 is a collaboration between the RKD, the Van Gogh Museum and Paris Musées / Petit Palais. Included in the display are more than 120 works, among them numerous loans from public as well as private collections around the world.